It’s been too long! Too long since the last update (3 months if you’re counting – of course I’m not), which is part of why I’ve split this one up into three. I mean, if it took me since September to finally get everything ready, I might as well spread out the tale. Also, it’s a small, tiny, little bit long. This is Borneo Part One. If you like it watch out for Part Two next week.

The summer holiday was a long time coming. Six months after I arrived in China, and much longer still since I’d taken that much time off at once, I finally had a week off. And I was using it to leave the country.

Let’s rewind a little bit. Since I went to Wuyishan, things had been pretty hectic. There’d been no time for extravagant things to cool places (or anywhere outside of Fuzhou, really) and no energy to much more than lie around. That’s because we’d been in the midst of Summer Course. 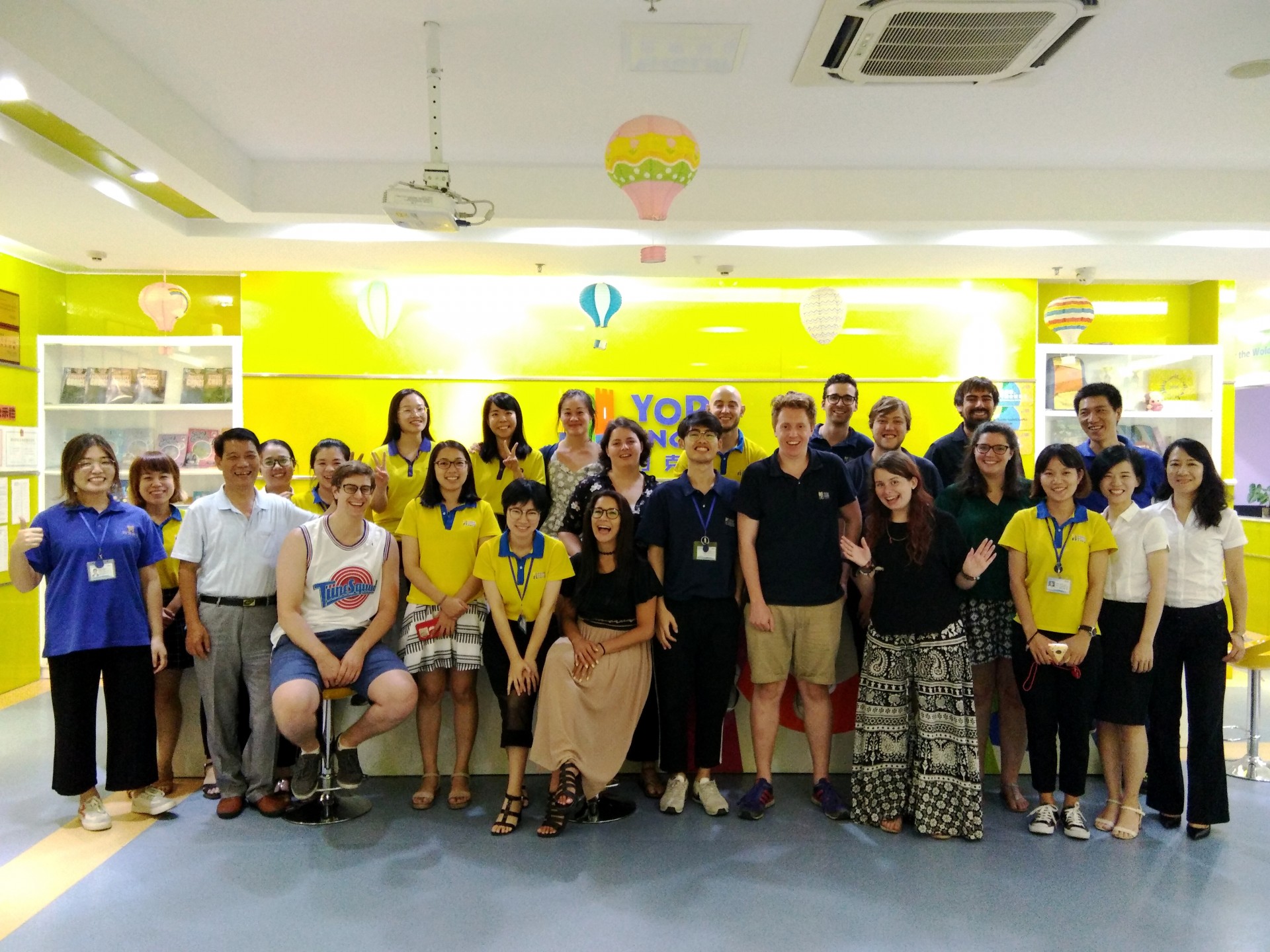 A busy summer of comings and goings. 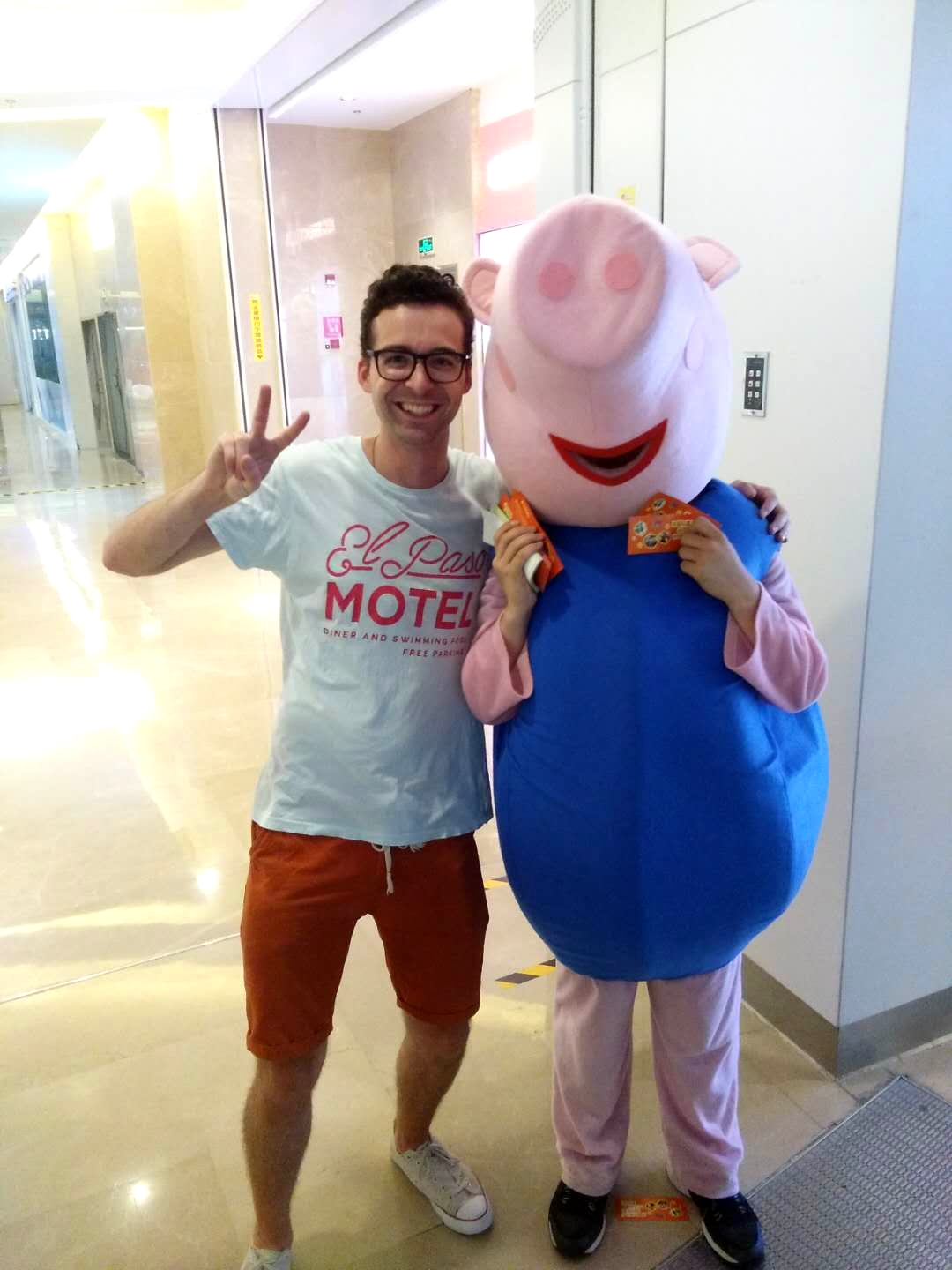 When you meet a celebrity…

Summer Course is the enjoyable tradition where all the extra curricular schools vie for the attention and affection of every student and their parents suddenly on summer break. They’ve got way too much time on their hands (obviously!) so need to be at school somewhere. The only question is: Which one? Of course, all of this ultimately provides extra advertising for the schools. Anyone who feels their child has benefitted from a course is more likely to pay for the full fledged thing.

When to put this Summer Course though? The teachers already work five day weeks! The solution – six day weeks! And early starts for the days you’re already working – There’s fun all around. 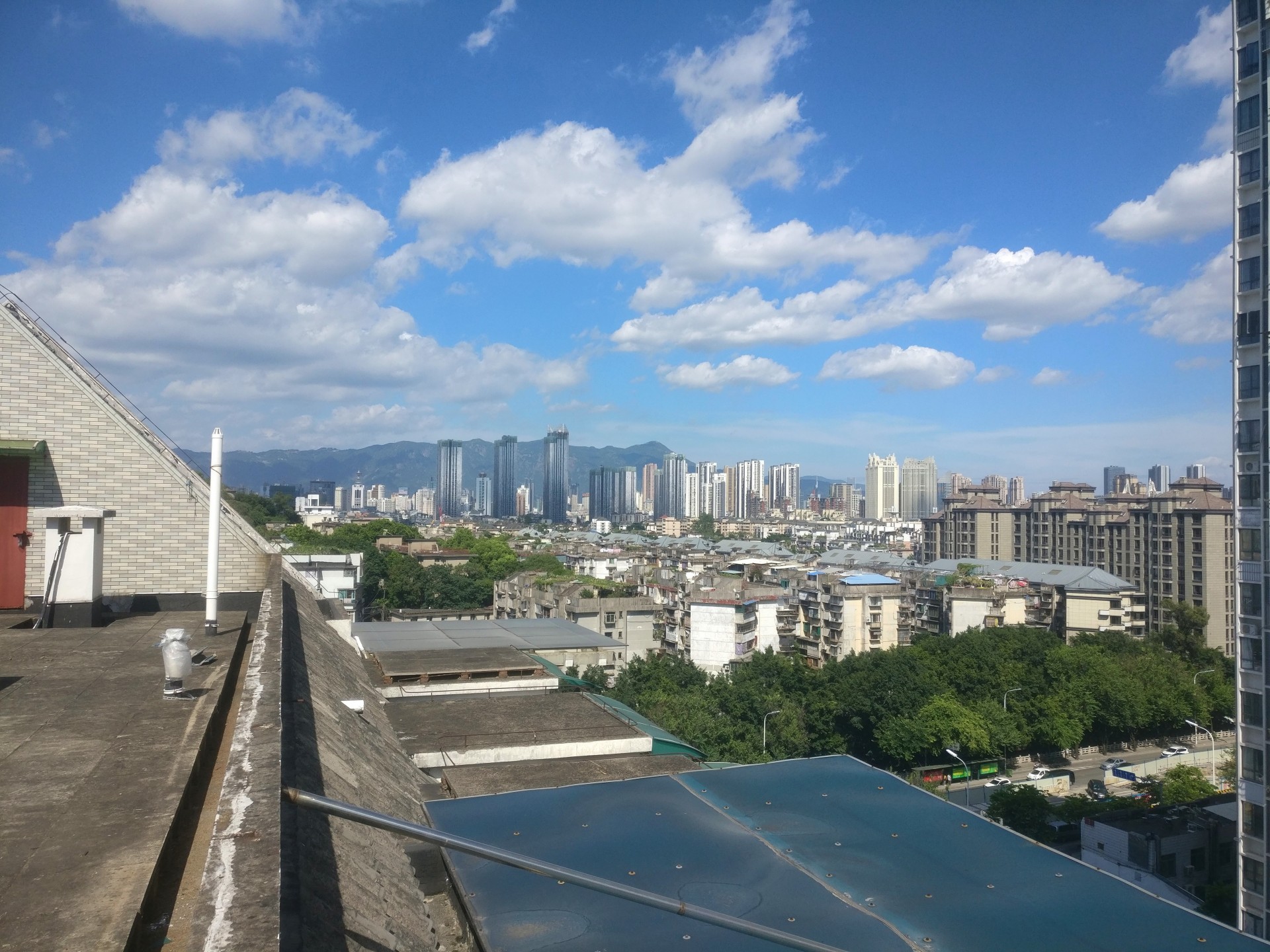 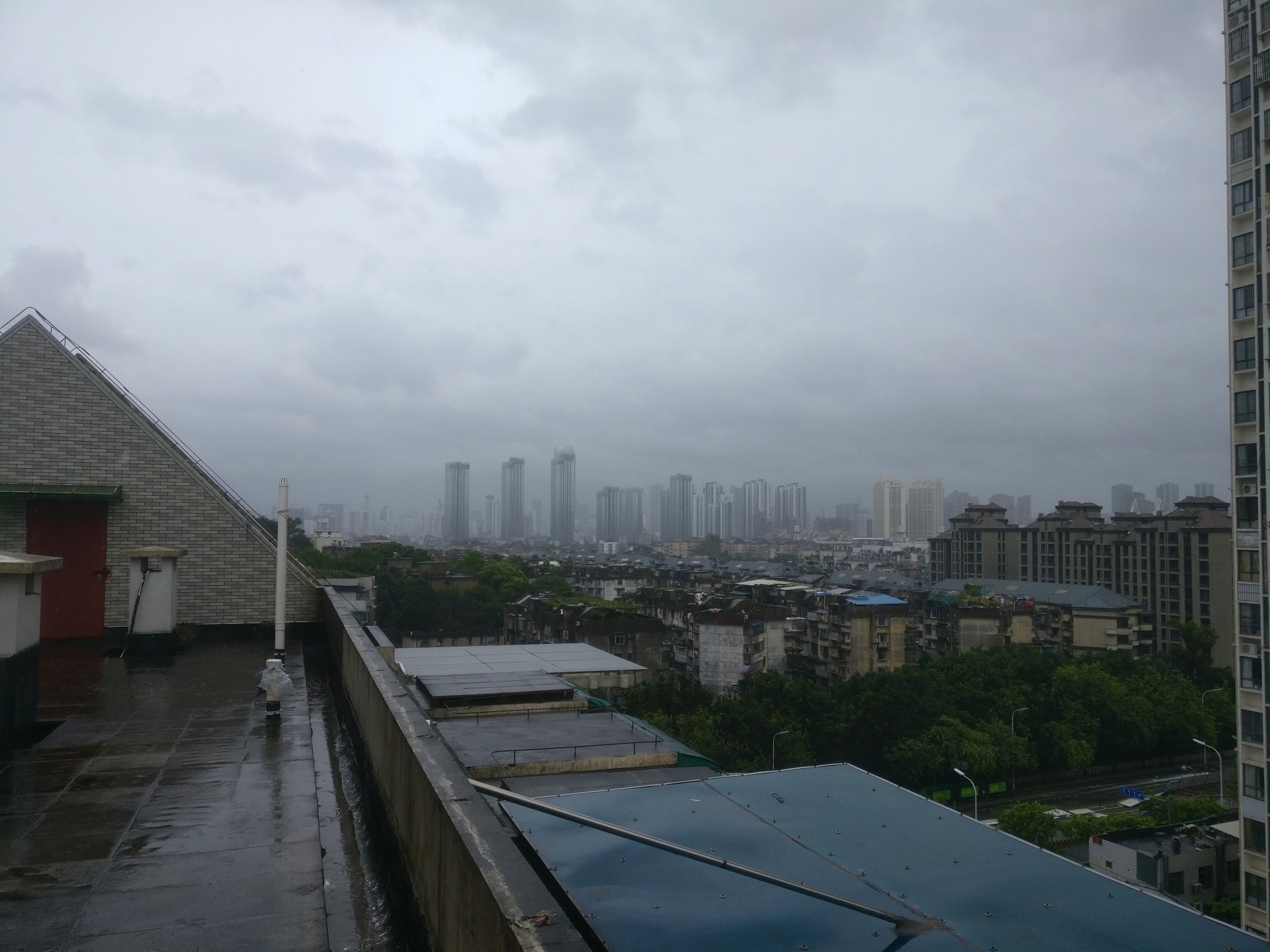 To be fair about all this, it’s not entirely a surprise when it crops up. It’s written into the contract before we start that this is the case (and that there’s a Winter Course, too), but its definitely a draining period of the year. It’s not helped by the slight feeling of futility about it either – few Summer Courses actually end up running, and often they only have 2-3 students. Surely there are better ways to drum up clients?

Wind forward six weeks, and everyone is pretty shattered. The light at the end of the tunnel has gotten bigger and bigger though; it’s almost upon us. For after Summer Course ends, our extra days are returned to us in lieu. We’re not on state school holidays for sure, but a week’s holiday has been the motivation for many a sin… 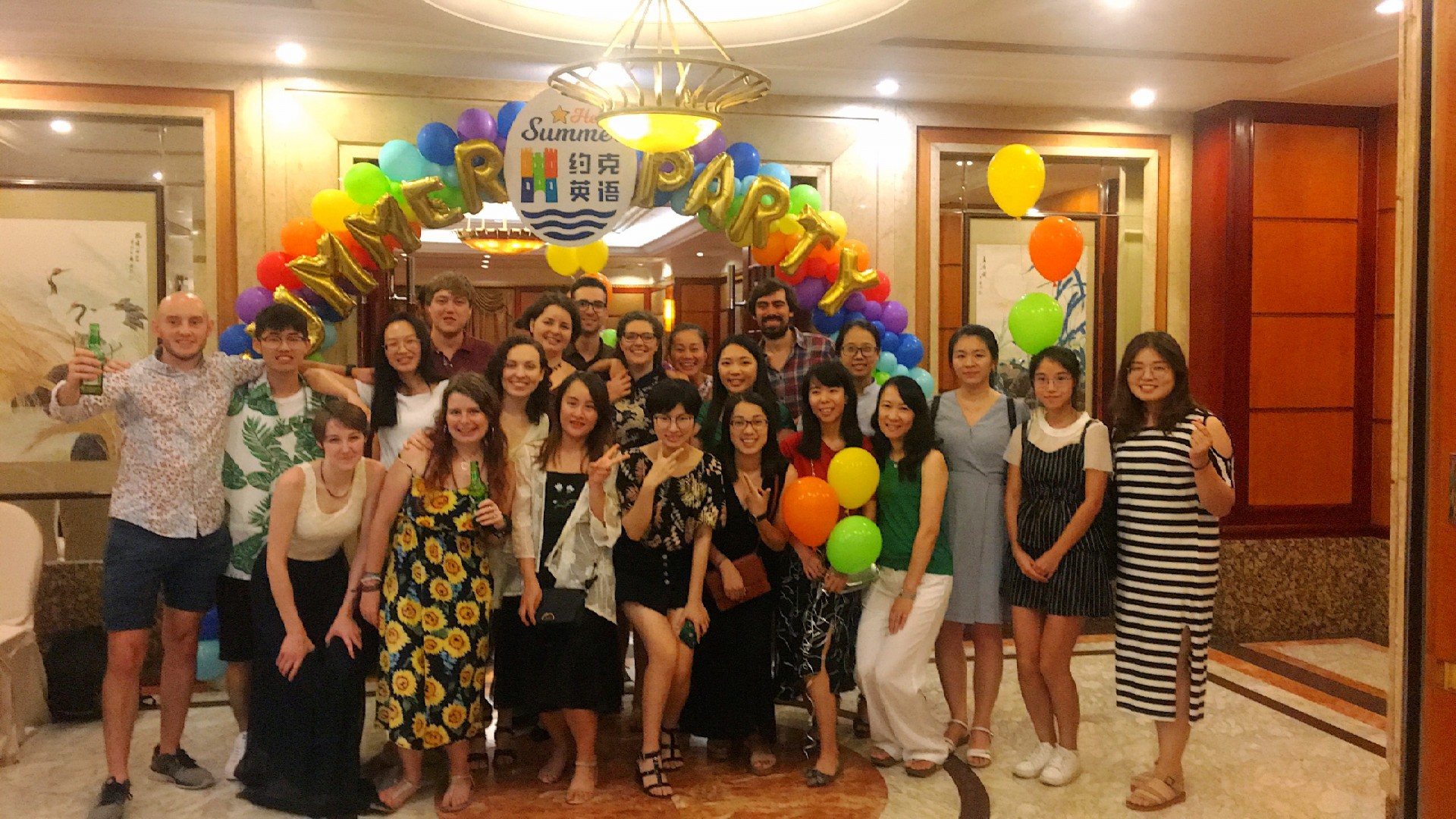 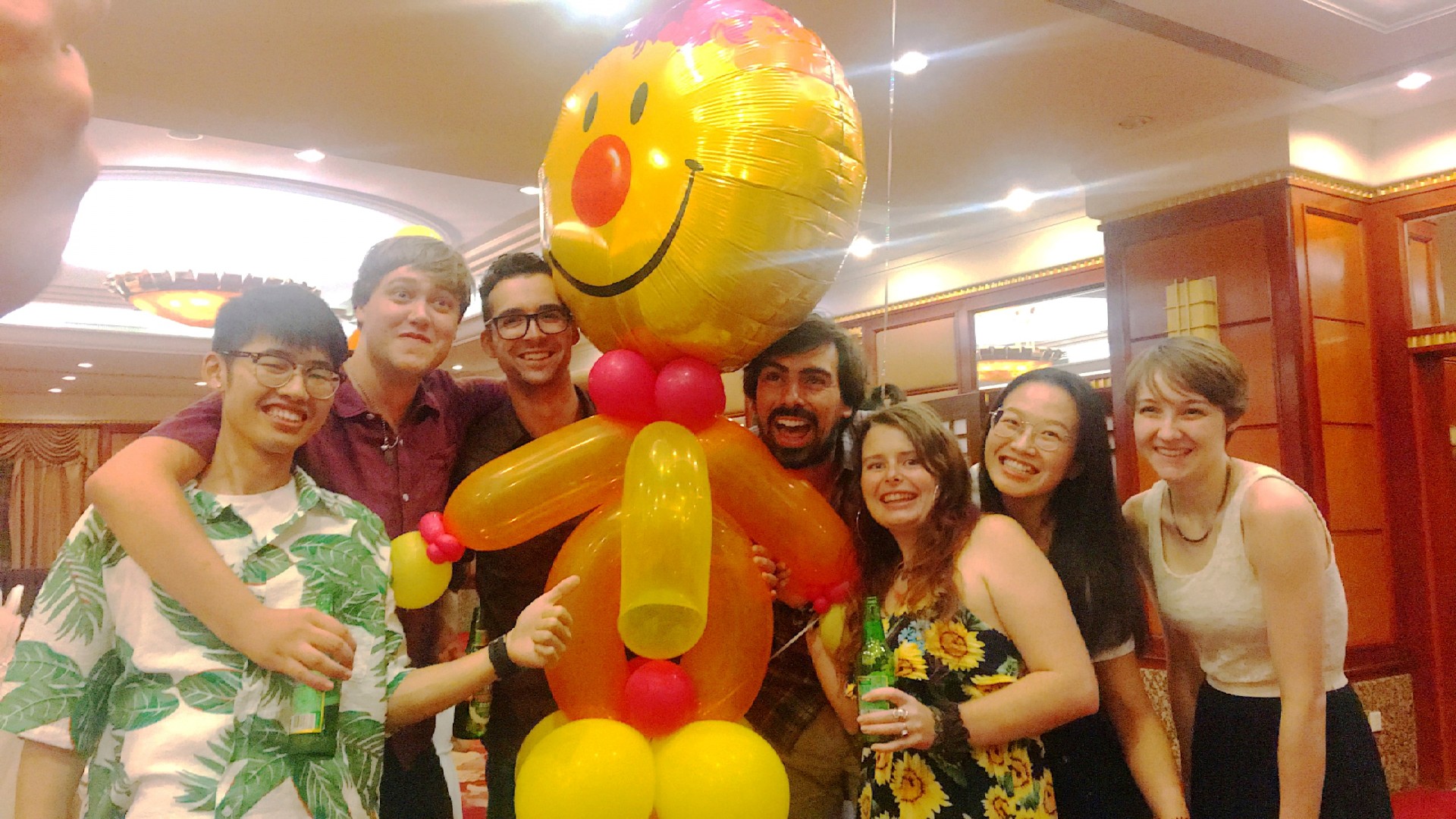 It was kind of difficult to decide where to go. I’d have been happy with anywhere to be honest, so long as it had a bit of adventure and at least some opportunity to stretch my legs, but I’d been given a strict remit. There must be beach and water. That narrowed the options slightly.

The trouble was, a lot of places involved either a rainy season or a significant travel time. Even within South East Asia, if you’re having to change planes twice, or get the train to another Chinese city first, you’re cutting out a decent portion of holiday time, especially when you’ve only got a week. The answer? No changes, only direct. Where? To Kota Kinabalu, Borneo, Malaysia. A mere 4 hours.

I’ll skip the whole getting there part. There’s not a whole lot to it aside from a relatively early bus and then sitting on the plane. Things even went smoothly for once! About the scariest moment was seeing a carbon copy Malaysian version of a teacher we work with. Even the bus from the airport to Kota Kinabalu centre was easy. Things certainly wouldn’t continue that way though. 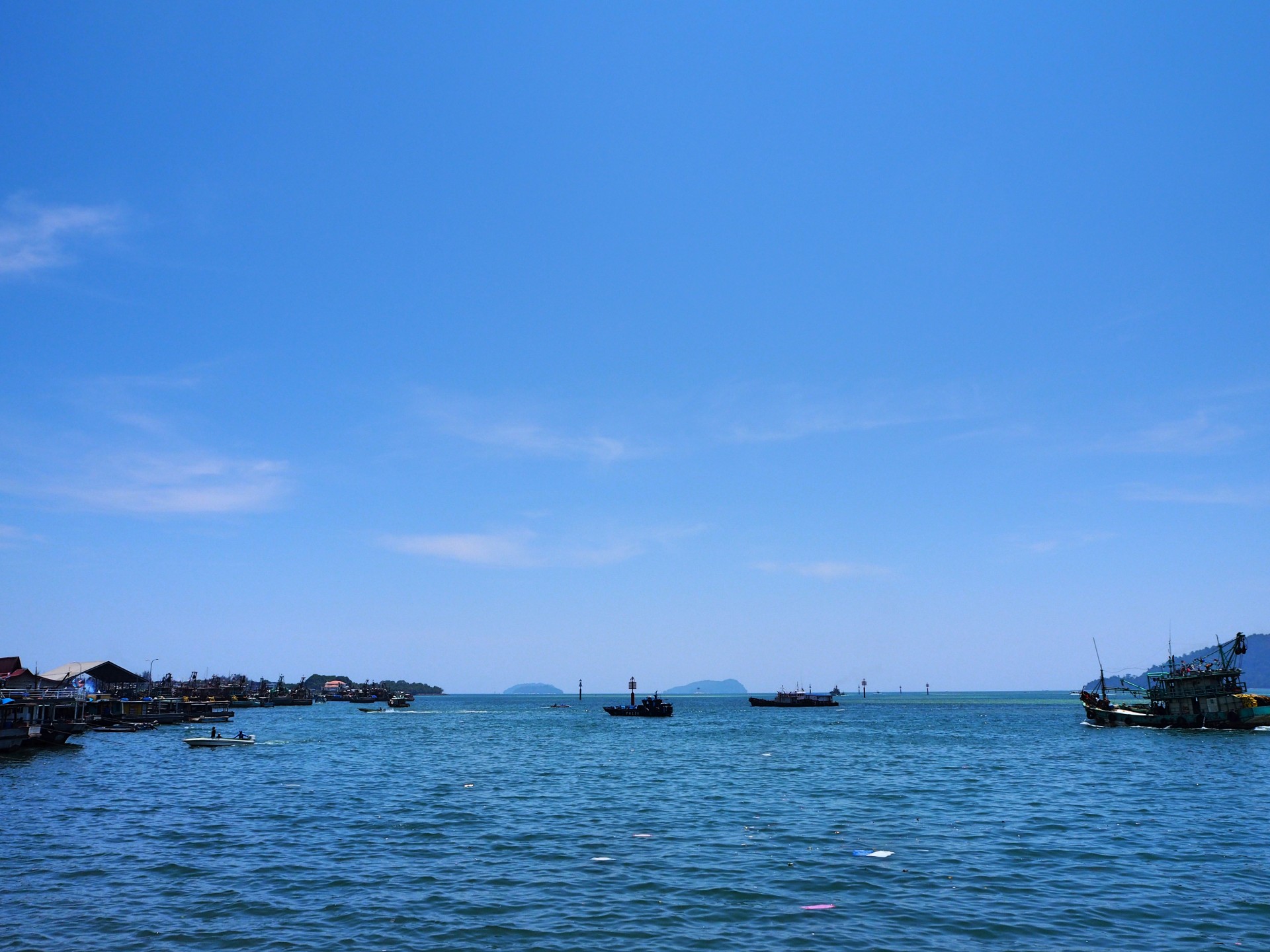 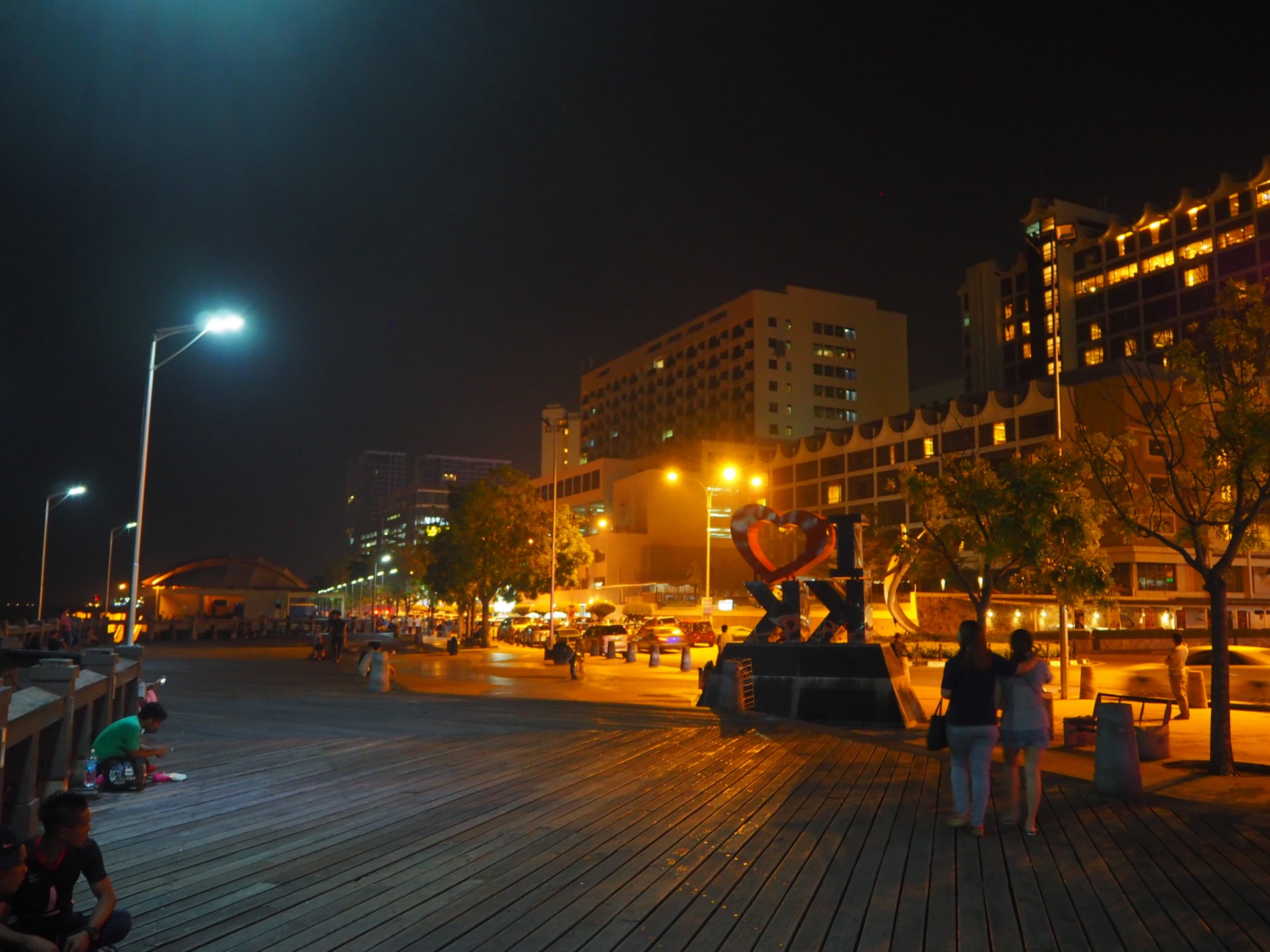 Still, it was late afternoon by the time we arrived, so we didn’t have too much time for exploring. As such, we made a quick trip around the centre and to the harbour market, scoping out the food options. Despite the enticing smell of the fish and raw meat sections, we eventually decided to dine elsewhere. Completely traditional double decker burgers from a quite obviously western catered place a few doors down from the hostel. At least it beats the Wendy’s Casey-Lee saw at the airport – she hadn’t stopped talking about it since we’d arrived.

We got around to moving more than a few hundred yards the next day. Back during World War II, Kota Kinabalu was pretty heavily bombed, so despite being a former British colony there’s not too much colonial architecture around. One of the few remaining pieces is the Atkinson Tower, a 50 foot high clock tower, unattached to anything else, which stands at the bottom of a hill overlooking the city.

Further up the hill, around a few twists and turns, is the signal hill observatory. The name makes it sound more fancy than it actually is – more of a viewing platform – but it’s a nice view. The slight breeze was nice too, in a city that definitely seems to be doing its best to rival Fuzhou for humidity. 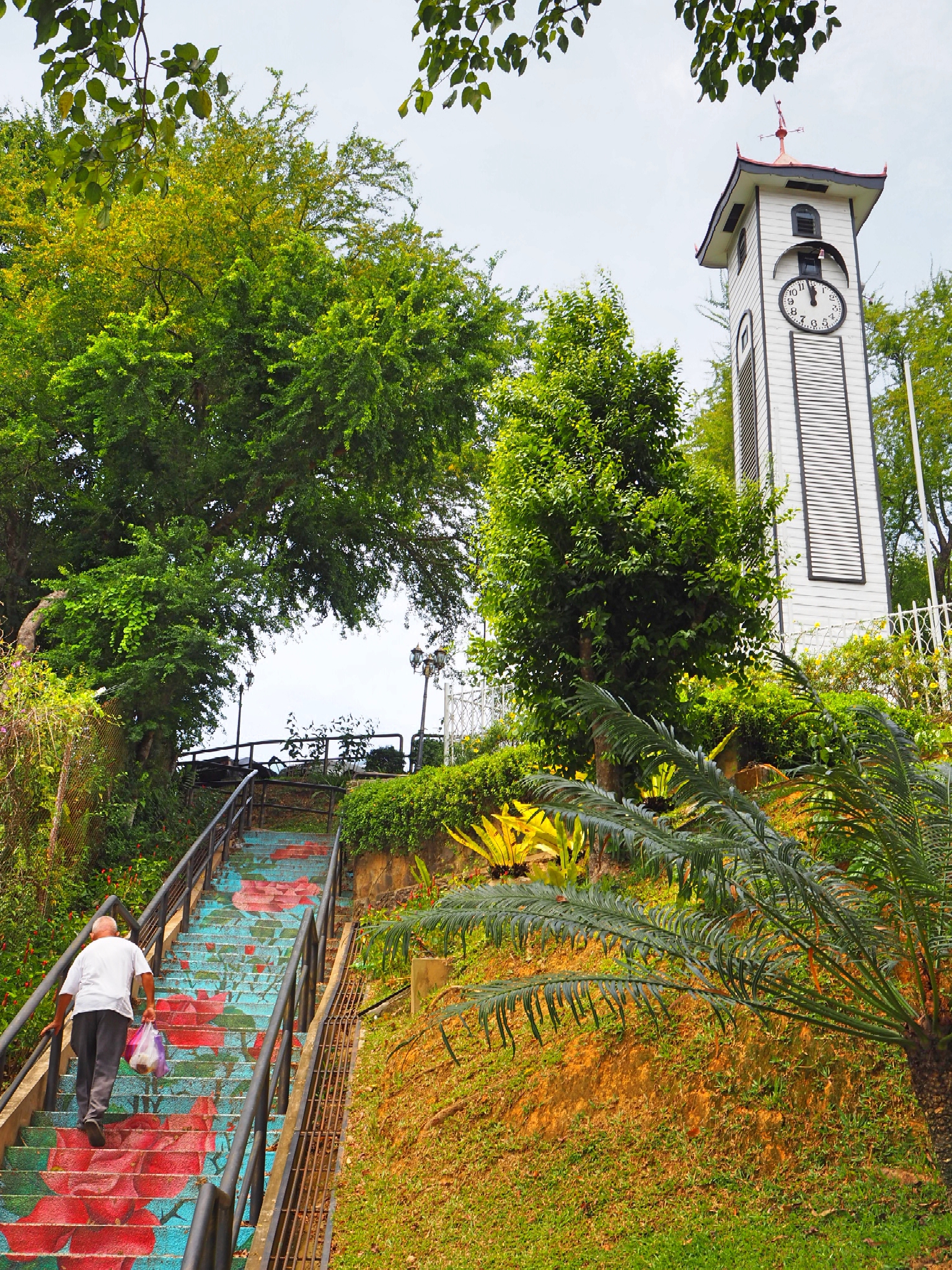 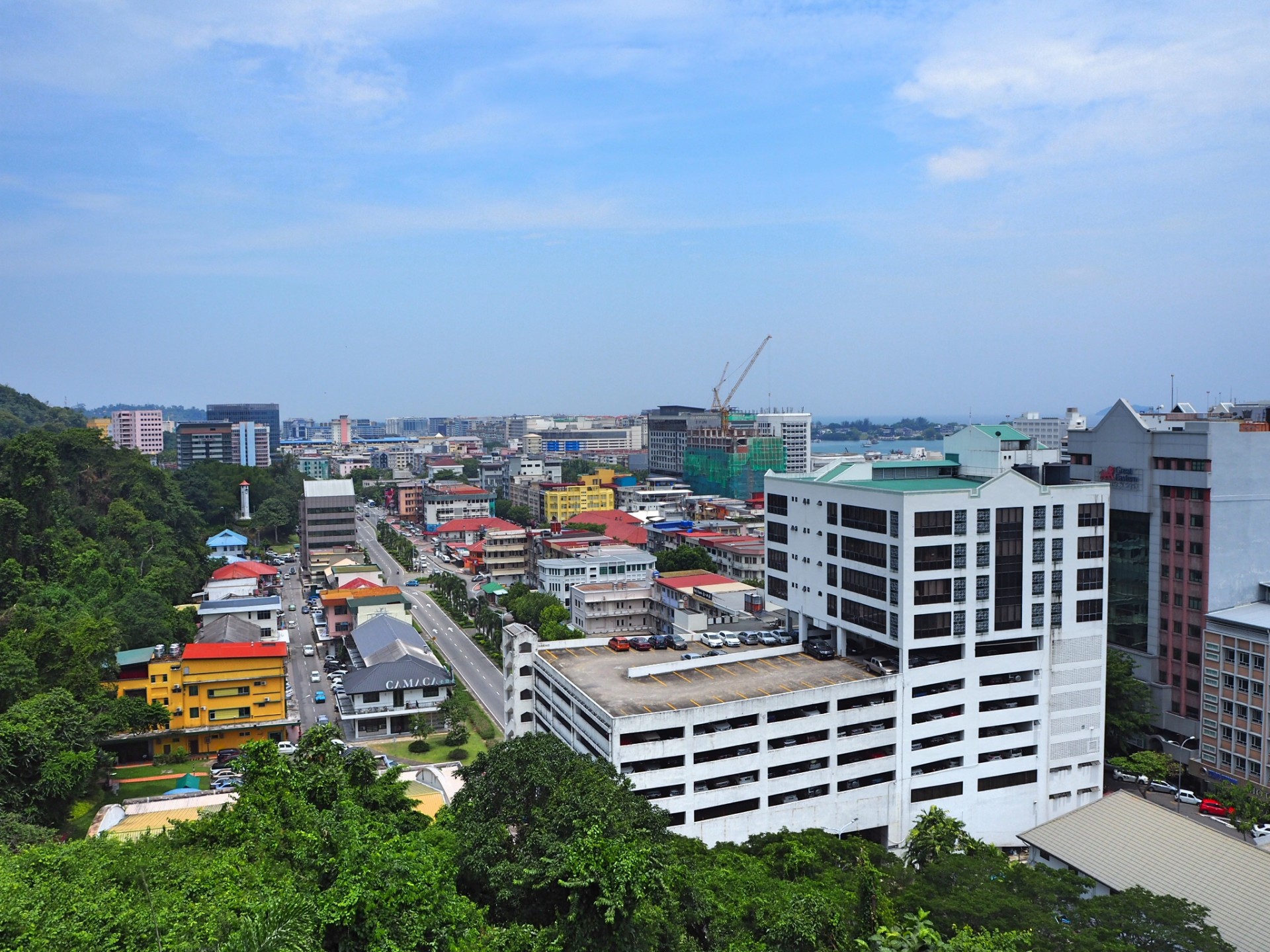 A view from a platform.

As the afternoon rolled round, we made our way out of the city and into the country for a lesson on some of Borneo’s indigenous populations. In our small minivan we barrelled around the low hills that sprung up in the interior, past small farmholds and stilthouses. Before we knew it, we’d arrived at Mari-Mari.

Mari-Mari is termed as a cultural village. Home to five of Sabah’s most prominent tribes, it’s definitely geared toward tourists, but not as a gaudy show. Mari-Mari is here to keep some of the traditions and cultures alive, and not let them be forgotten. So said our guide, Popoi, anyway. 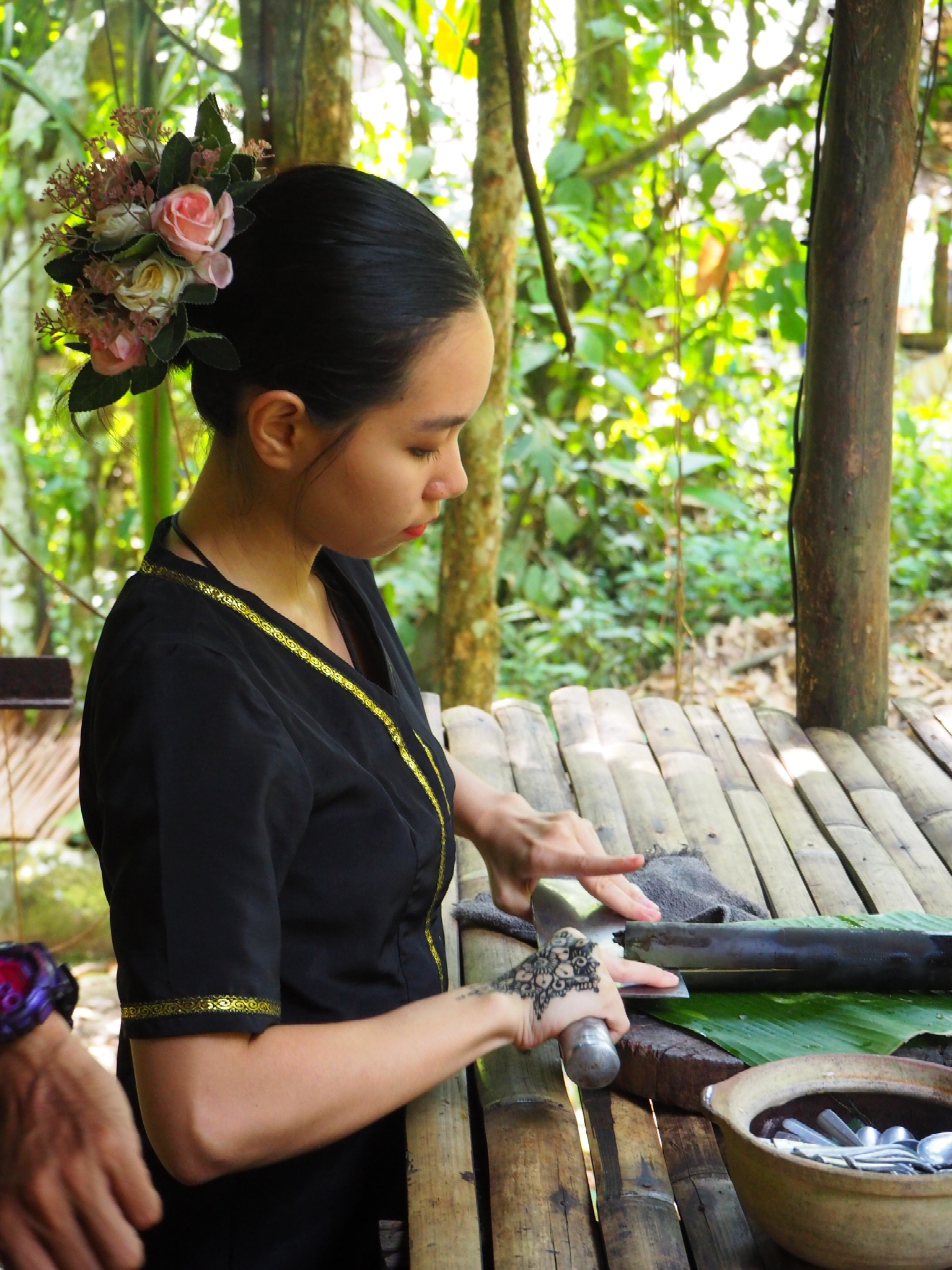 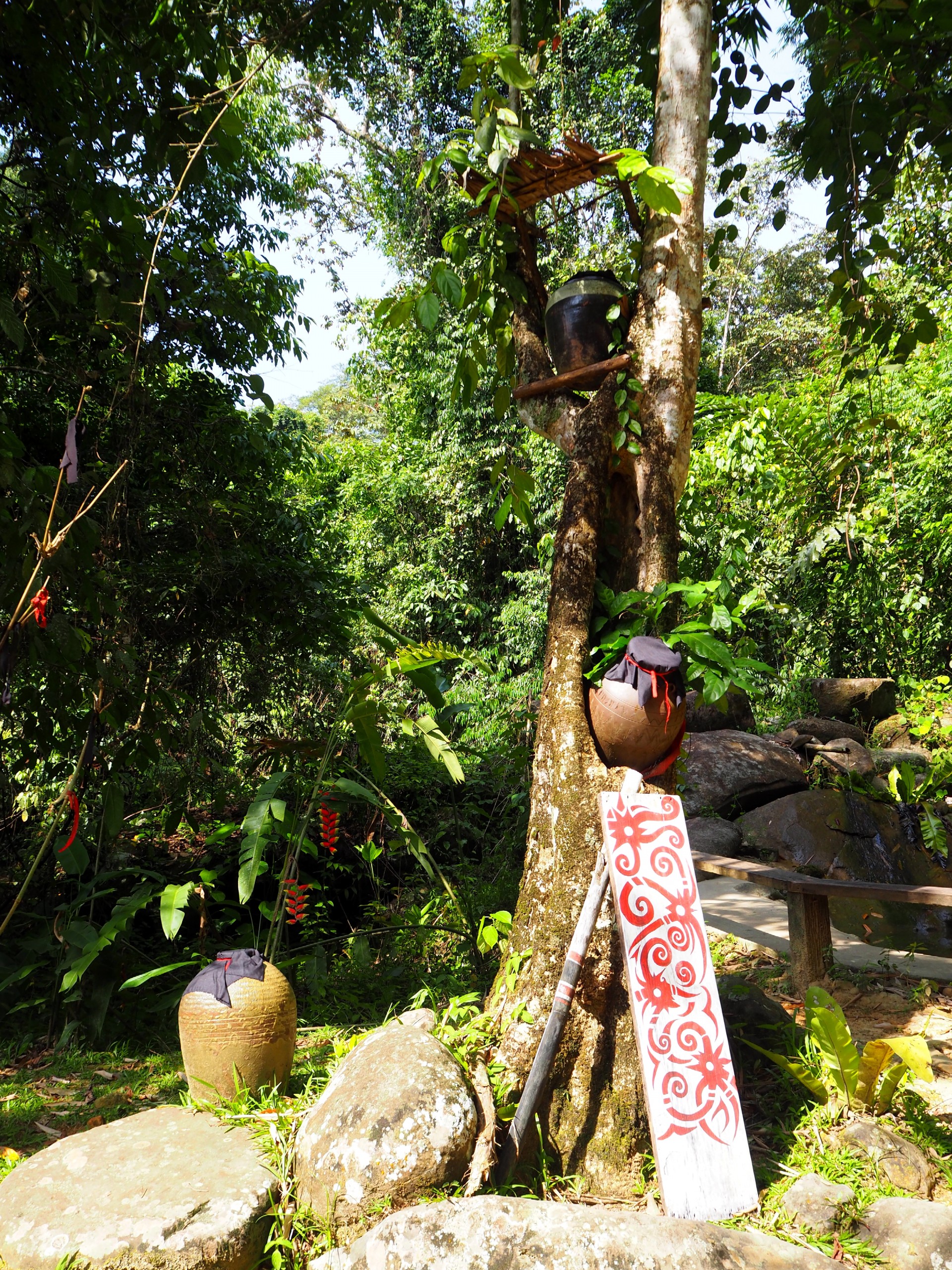 The higher up the tree, the more respected you were.

Popoi (not quite said like Pop-eye, he told us) was a skinny, stetson wearing, long haired man, who looked anything but traditional. He didn’t need to be though. Mari-Mari speaks for itself as you make your way around from tribe to tribe. Popoi provided the details and the comic relief. From little pointers about how not having sleeves meant a man was single (he said to my sleeveless self) to the processes of distilling alcohol, making traditional biscuits and how high to bury your family in the tree. Nothing was too much or too mundane for him to talk about.

All this talk about Popoi might give the impression that the village was deserted though. Definitely not. At the house of the Lundayeh tribe we were introduced to a young hunter and his bride. With the Bajau, I watched as two women sieved batter into a pan to make more biscuits, and proceeded to drop it everywhere to great embarrassment. A Dusun girl showed us some food cooked in bamboo shoots and with the Rungus we made fire. This is a massive ensemble cast of people who want to show off their culture. 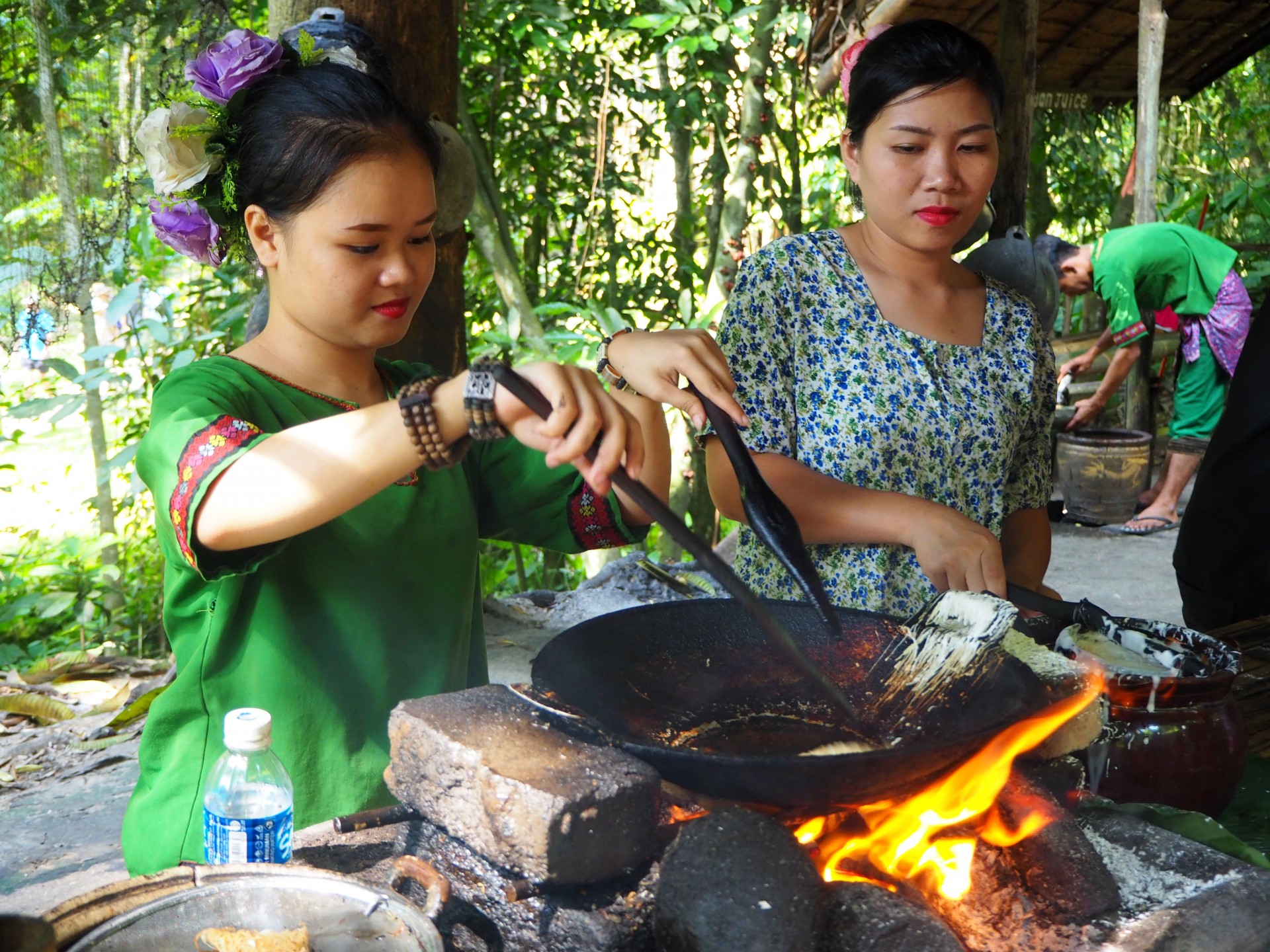 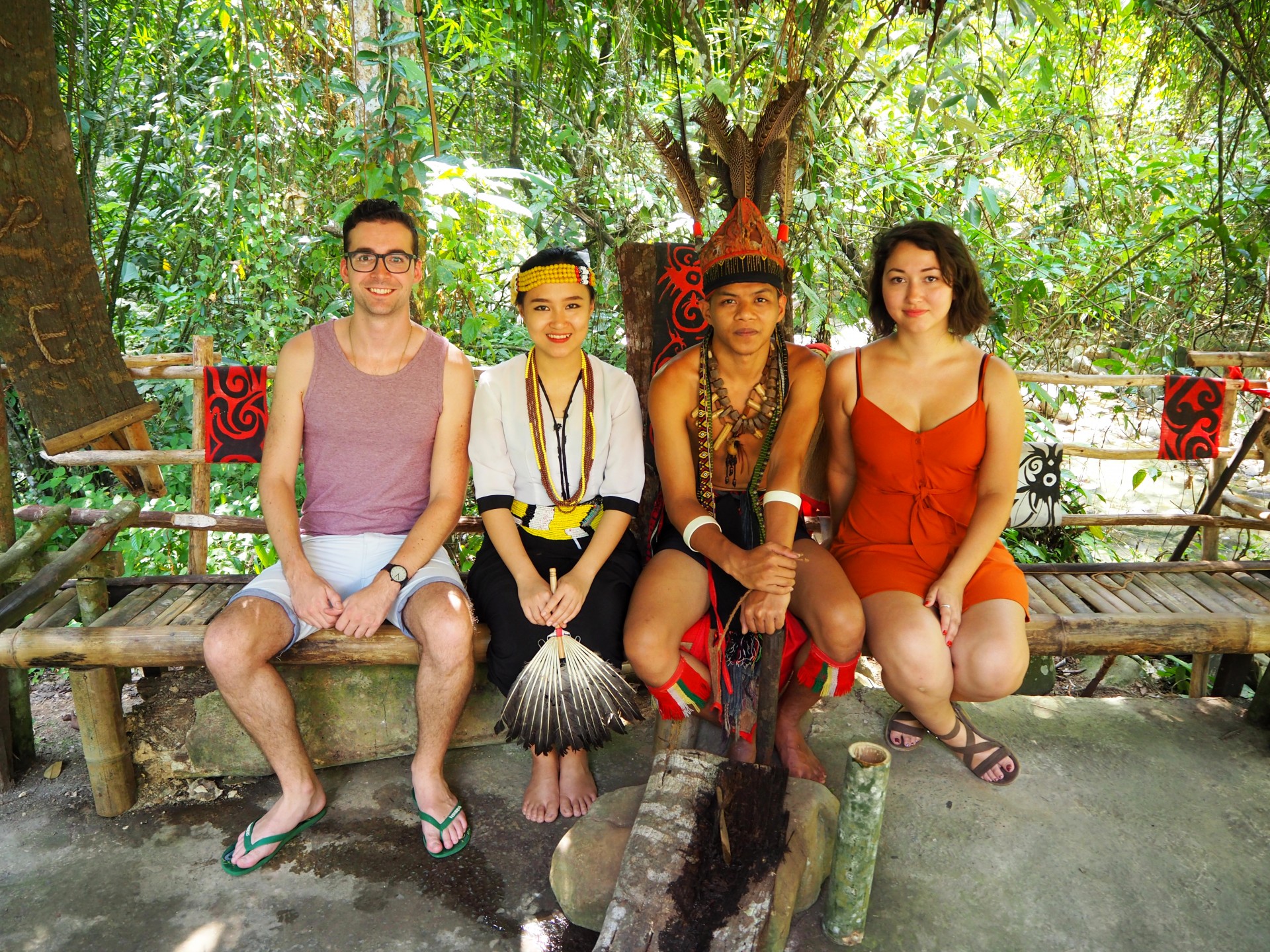 A hunter and his wife. Oh, and us.

On arrival at the Murut longhouse, the last of the tribes represented at Mari-Mari, we were greeted by whoops and chants yelling. This tribe was supposed to be the most aggressive of the tribes. Thankfully, Popoi said they no longer practise head hunting. I was pleased, because I suspect it would have been a rather more awkward affair had he not mentioned anything.

They turned out to be rather accommodating though, especially for people who have a reputation for chopping off heads and keeping them as trophies. We got a lesson in firing blow darts, helped a couple of dudes jump 10 feet in the air on a bamboo trampoline, and even got henna tattoos. So they’re not your regular head removers. 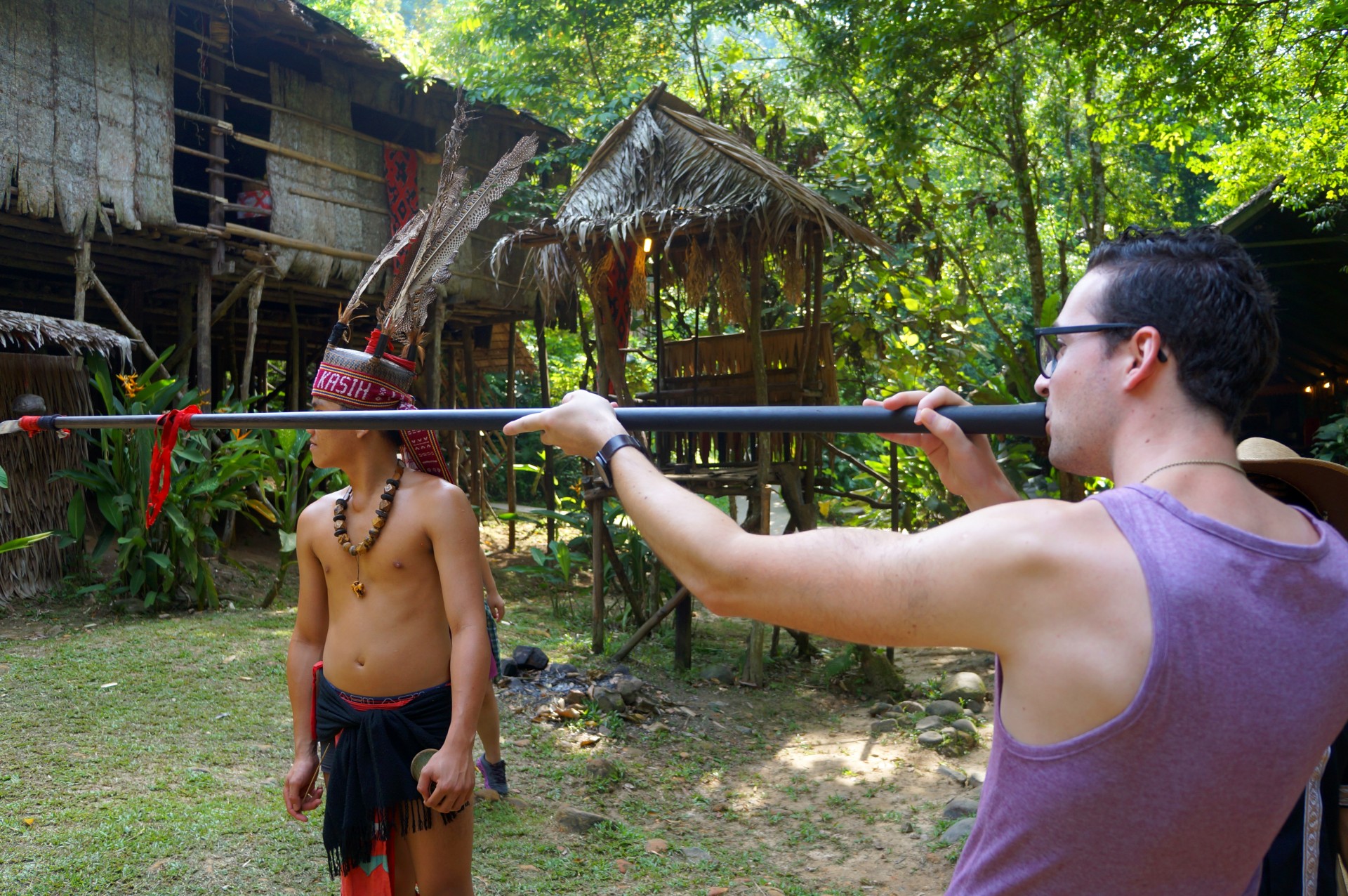 Testing out my blowpipe skills. I missed. 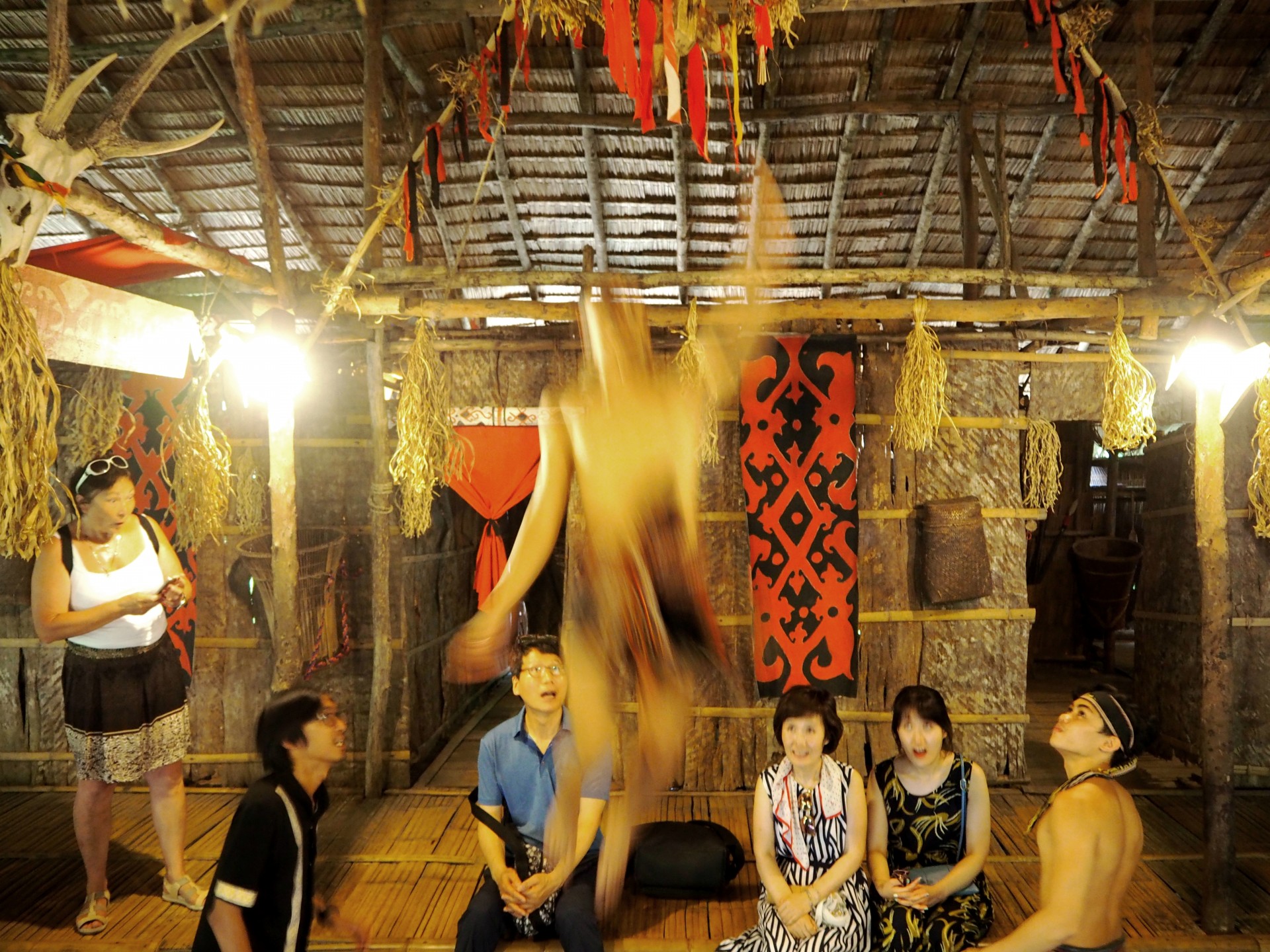 We ended on a pretty awesome musical, dancing, singing medley from just about everyone who we’d seen over the day, before making our way back to Kota Kinabalu. We had one more stop for the day though. A few miles out from the centre, just as the sun was going down, we got ourselves dropped off outside a mosque. The second main mosque in Kota Kinabalu, it might not sound like anything fancy, but its a stunning sight. Ensconced within a small lagoon, the ‘Floating Mosque’ as it’s known, is reflected perfectly in the clear blue waters, its towers reaching both up to the sky and down to the depths.

We hung around for a while, taking in the sunset, before taking the bus back to our hostel. A rather roundabout journey, at one point it seemed like it was going to leave out the other side of the city before finally coming back toward the centre. After what seemed like an age, we finally arrived back. 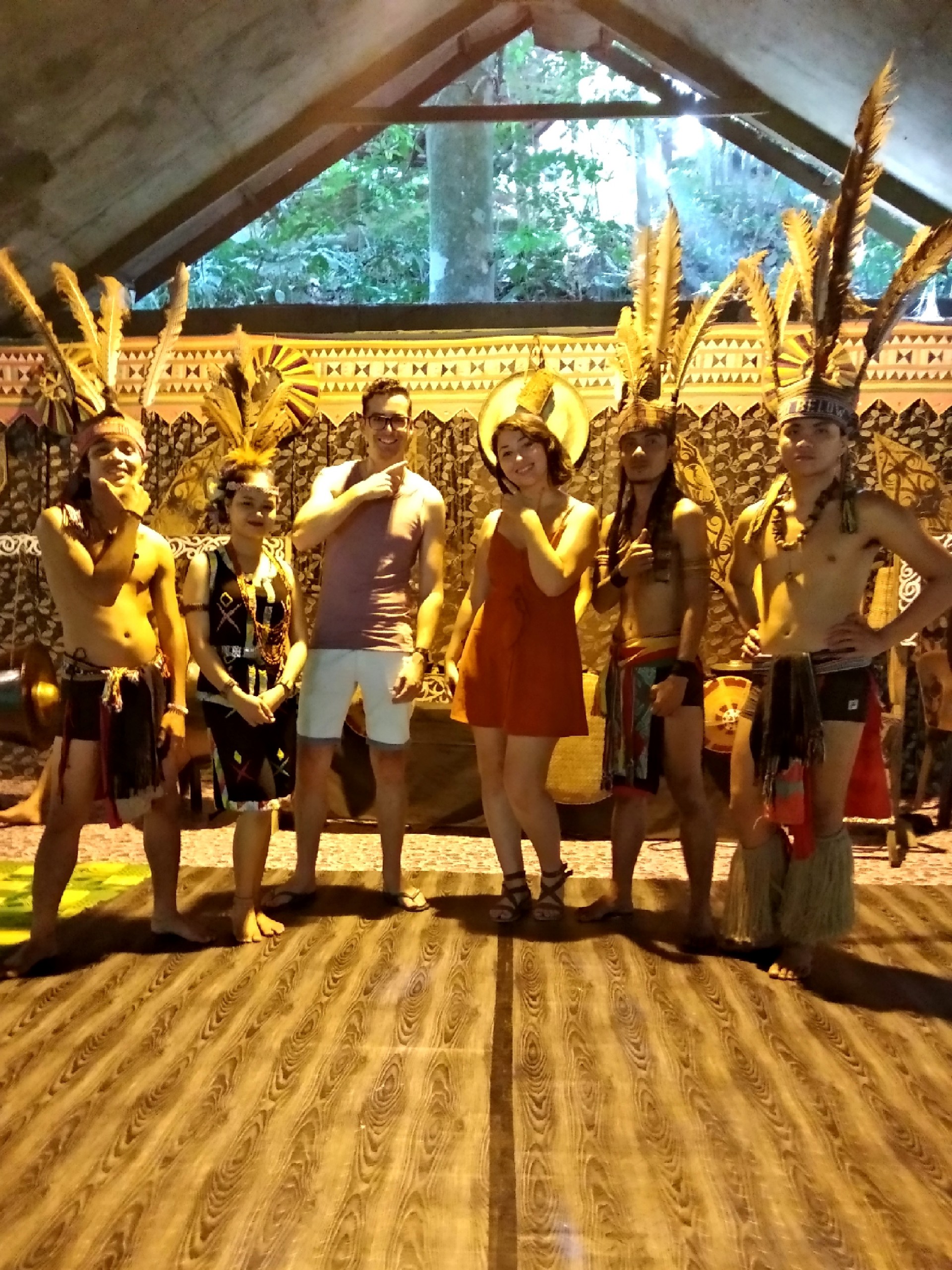 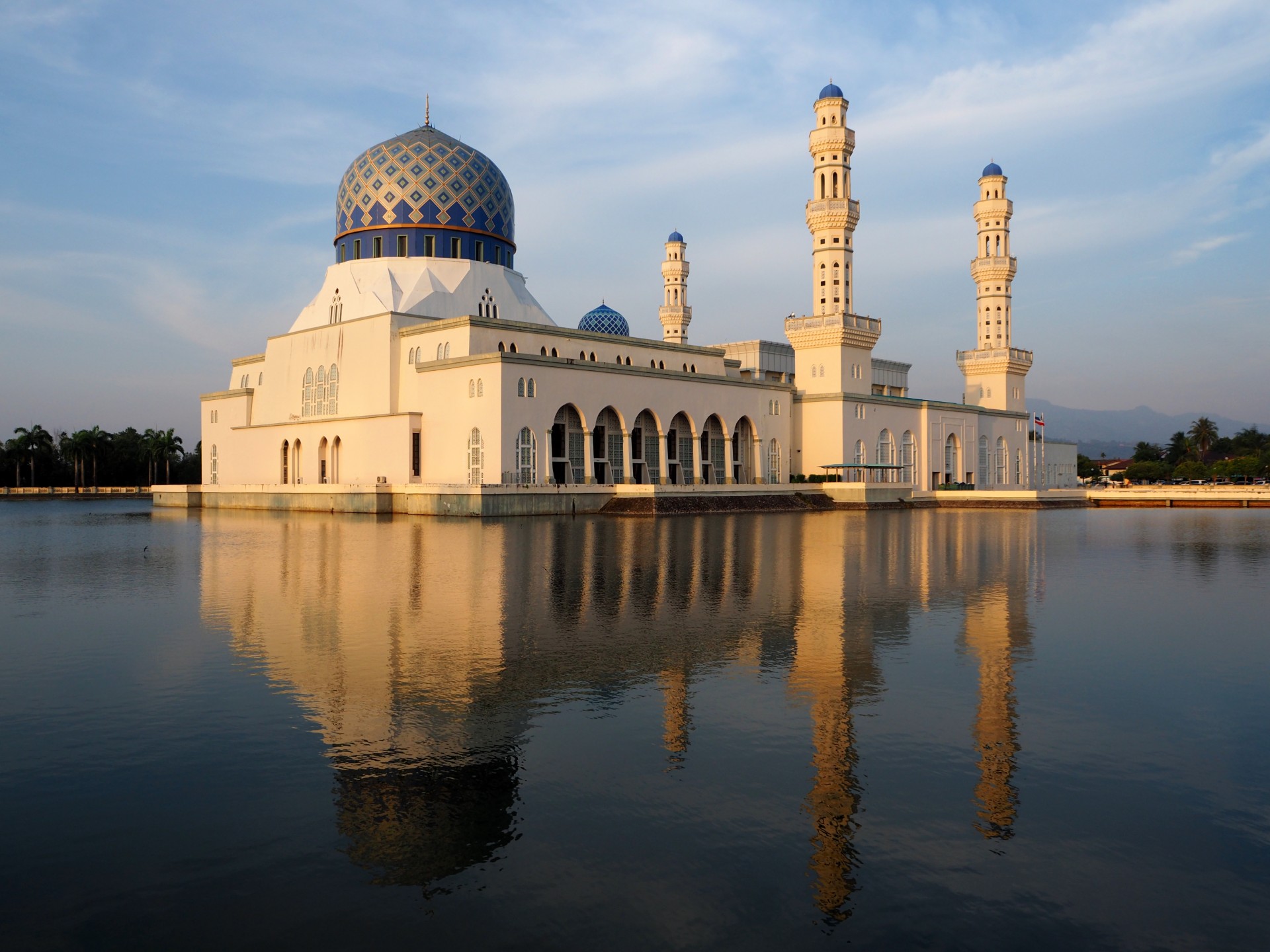