Ah, the final part of the Borneo trip. At long last I conclude what should have been a lot shorter considering I was there for only a week. If you haven’t read either of the first two, here they are in all their glory; Part One and Part Two.

With barely any rest, we’d opted to go to Mount Kinabalu the next day, mostly so we’d have two days left to relax and go to the beach. This plan, too, went awry. Honestly, there’s a common theme in all my holidays…

After yet another early wake up call we went to the bus station (fortunately nearby for this trip), only to be told that there was no bus to the park that day. We were confused as there should have been, but details were thin on the ground and he only spoke Malay, so we got in an interpreter. Since the receptionist at the hostel couldn’t leave, and she was confused too, she sent the hostel cleaner, a kindly elderly woman with a limp, to help us. With her help we found out that apparently there’d been some sort of incident on the road. 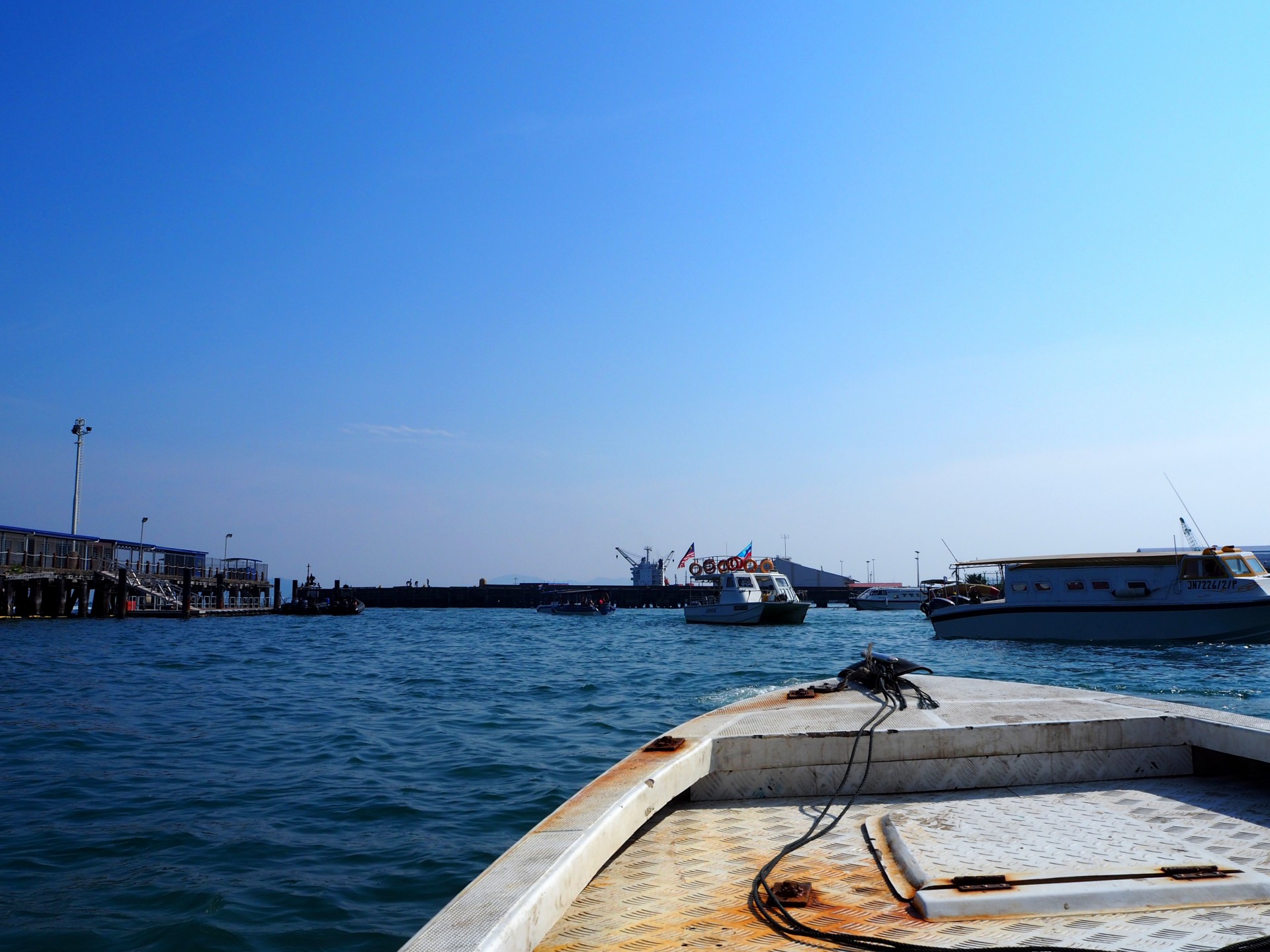 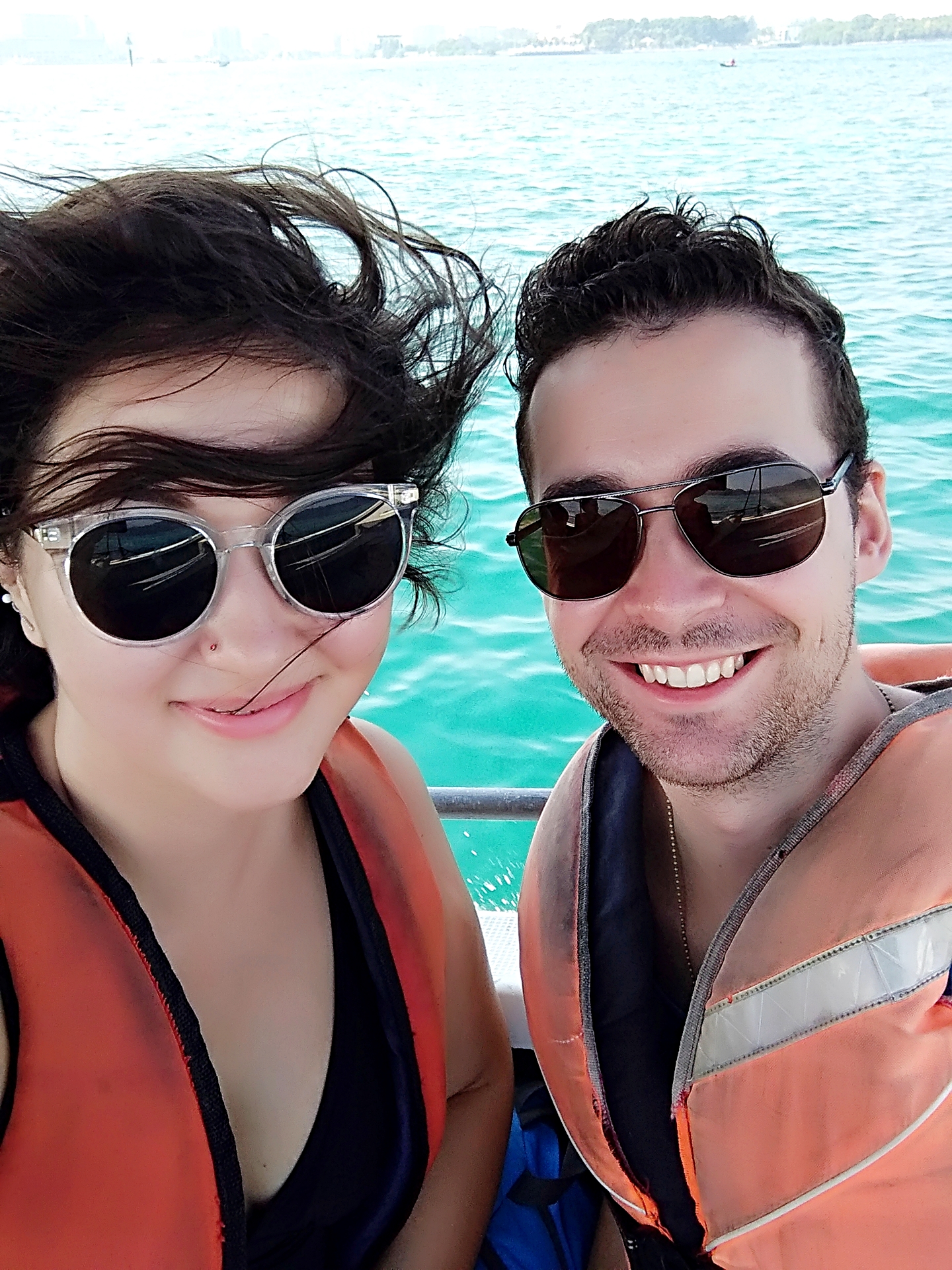 Off to a beach.

Without too much thinking, we made our way down to the pier instead, chose some islands, and took a bumpy speedboat across the the crystal blue water. The sky shone over the waves on what was a glorious day. At last, we were in for some relaxation.

It didn’t quite all pan out. We first stopped on Gaya, the largest of the islands in Tunku Abdul Rahman national park, which was absolutely empty. When we realised we could only go to one beach, we thought we might as well also take a stroll to a lighthouse, through the rainforest. I mean, why not? We asked the tourist information desk how long it would take to get there.

“No one goes to the lighthouse.” he said matter-of-factly.

That one he didn’t answer. A few minutes later we found out for ourselves. Ten metres in and the mosquitoes had already found us. We retreated to the beach rapidly. 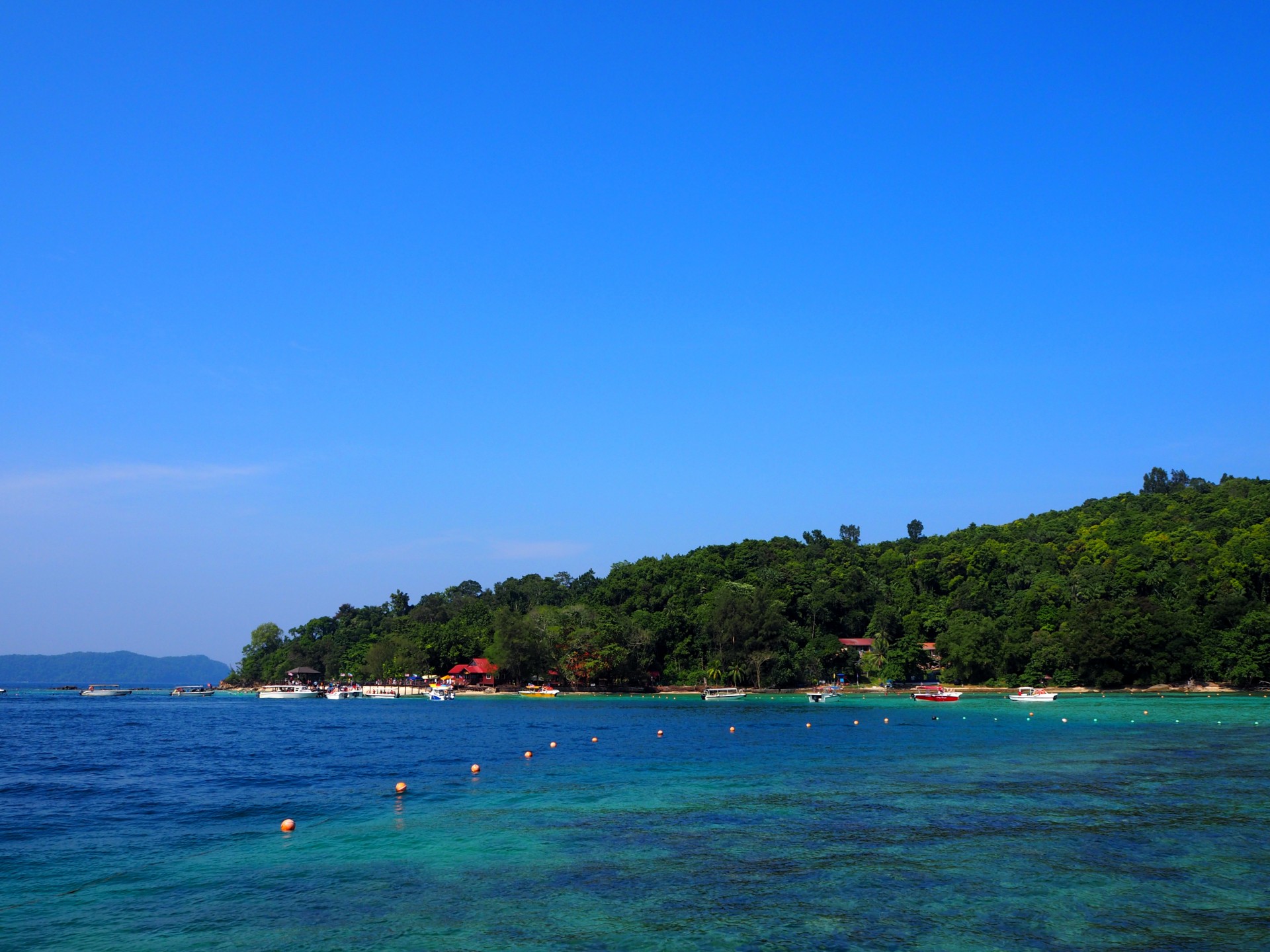 A first glimpse of paradise.

The beach at Gaya was lovely and completely devoid of other tourists, especially to begin with. After a while though, we had to catch our pre-booked boat to another island. We picked up our stuff, walked to the end of the jetty, and then promptly watched as our boat left without us.

We weren’t actually sure it was ours, as they’d stopped for a grand total of about five seconds. No sign. No call. Nothing. It wasn’t till we’d waited for a while that we came to the conclusion it probably was. Returning to our friendly tourist info guy, we managed to get them to come back for us. In an hour. 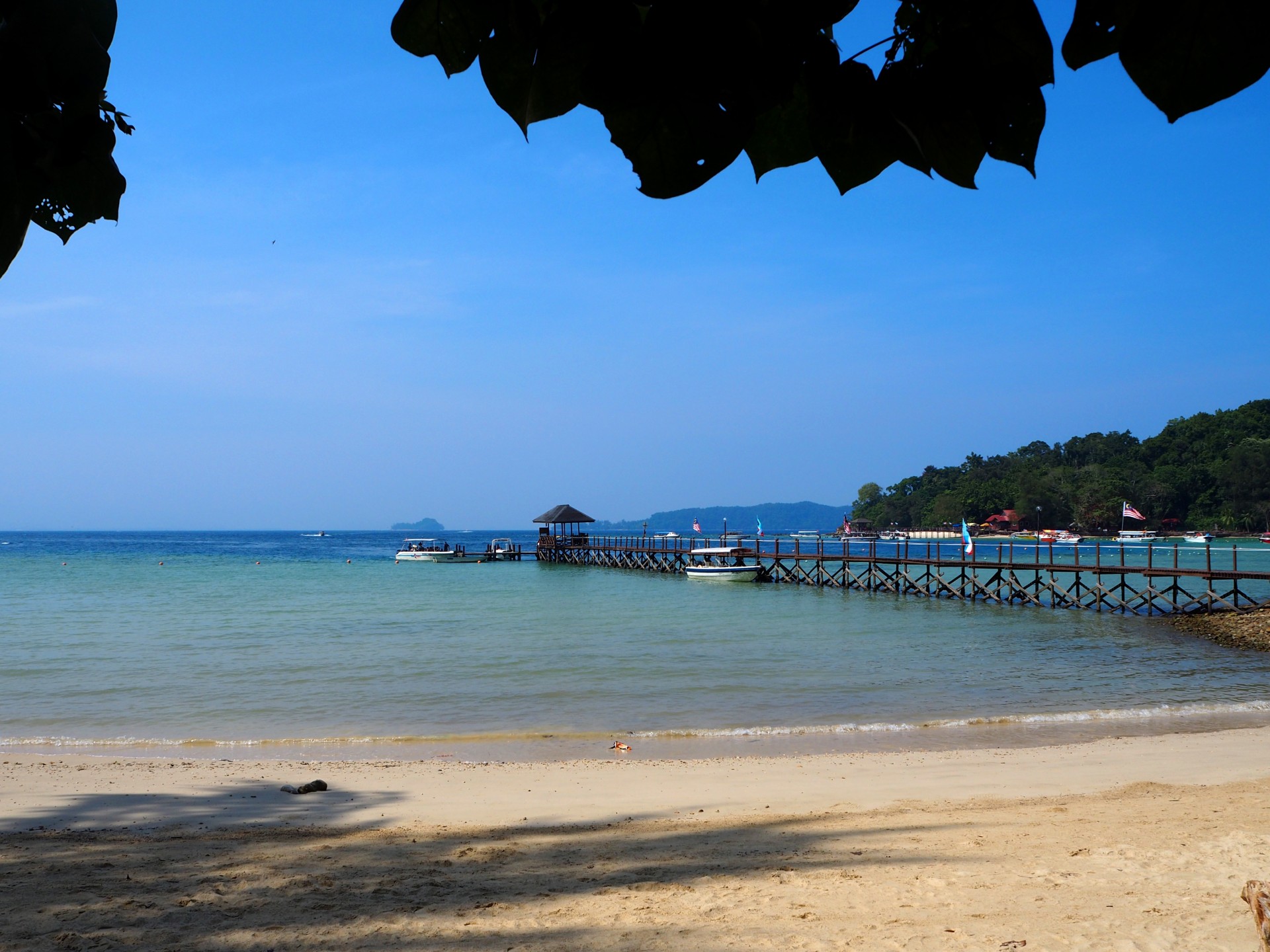 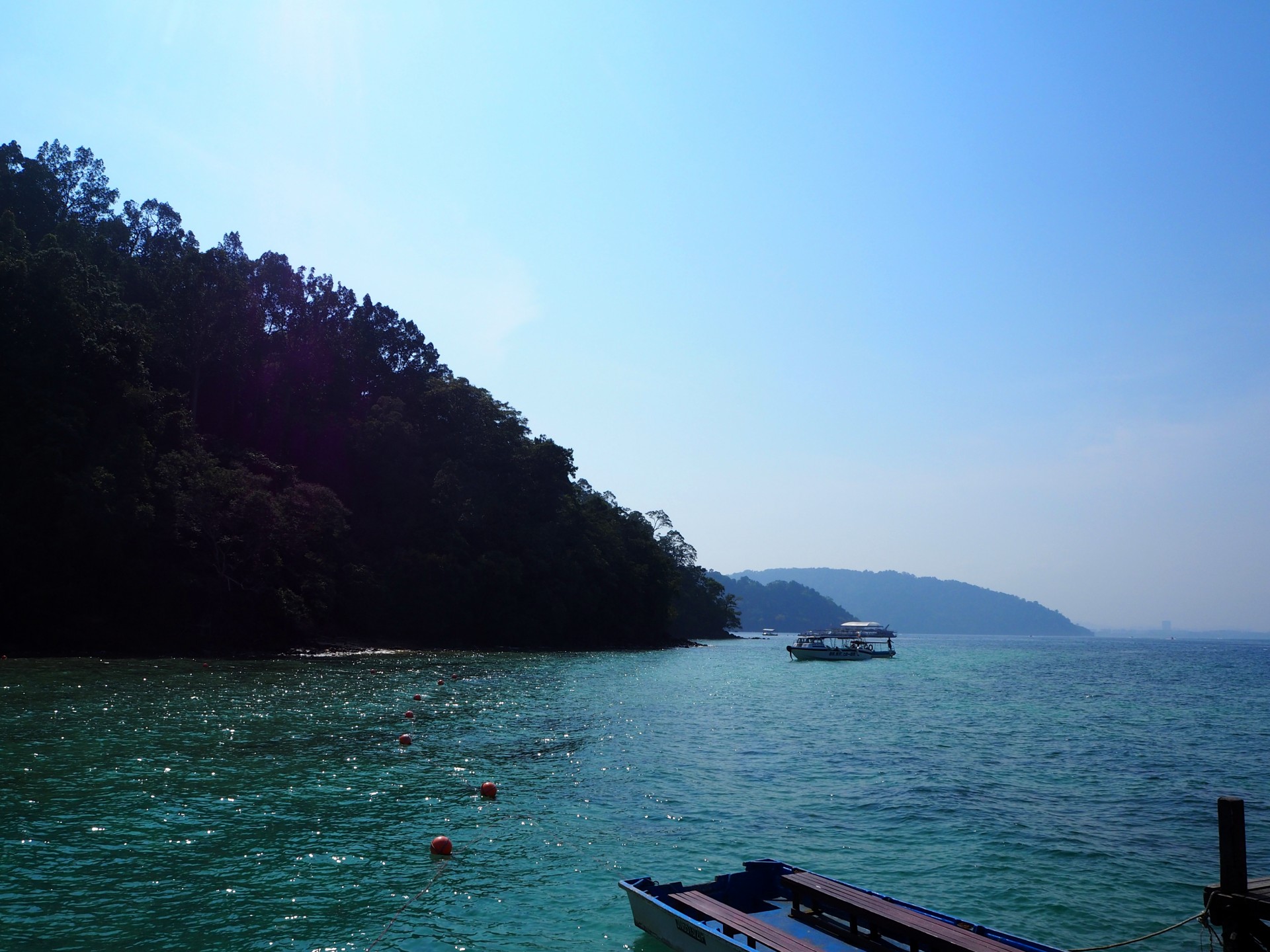 Pink shirt (as he came to be known), who picked us up, was very apologetic. And a very striking pink shirt it was, too. I suspect it wasn’t the first time he’d dealt with tourists being left behind. He took us to Sapi, where we had to stay for half an hour, before organising us to Mamutik, our intended destination. While things progressed smoothly with him, once his guidance was gone we had to contend with everyone else again. Our boat made a pit stop at Manukan to let people off, but afterward our new driver decided he was driving back to the mainland already. We directed him back before too much damage was done.

By the time we arrived on the smaller Mamutik, it had gotten significantly cooler, but unfortunately for me the damage had already been done. Plenty of time in the water, coupled with our subsequent sun exposed boating adventures, had left a beautiful shade of tomato over my normally pasty white chest and shoulders… 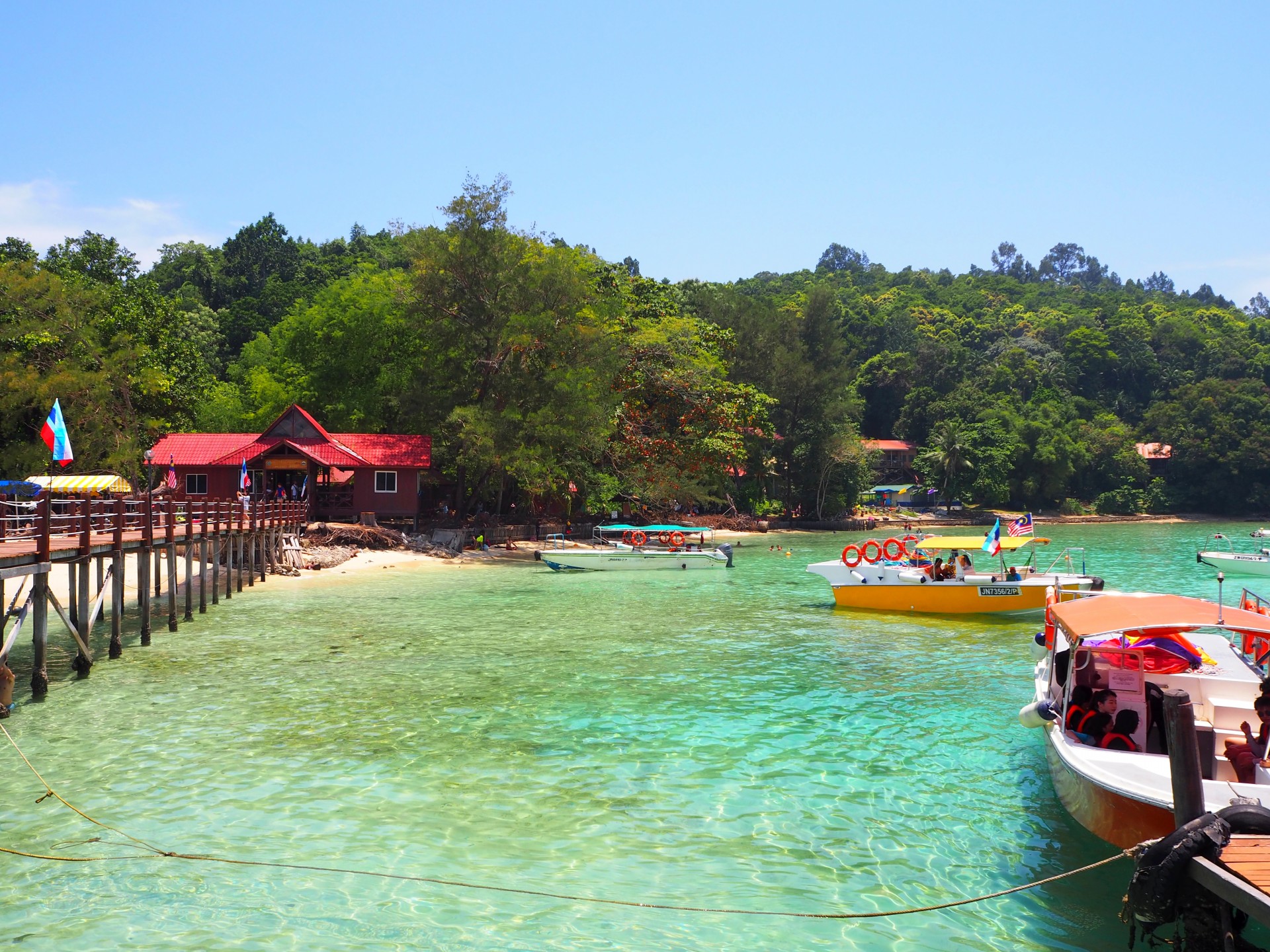 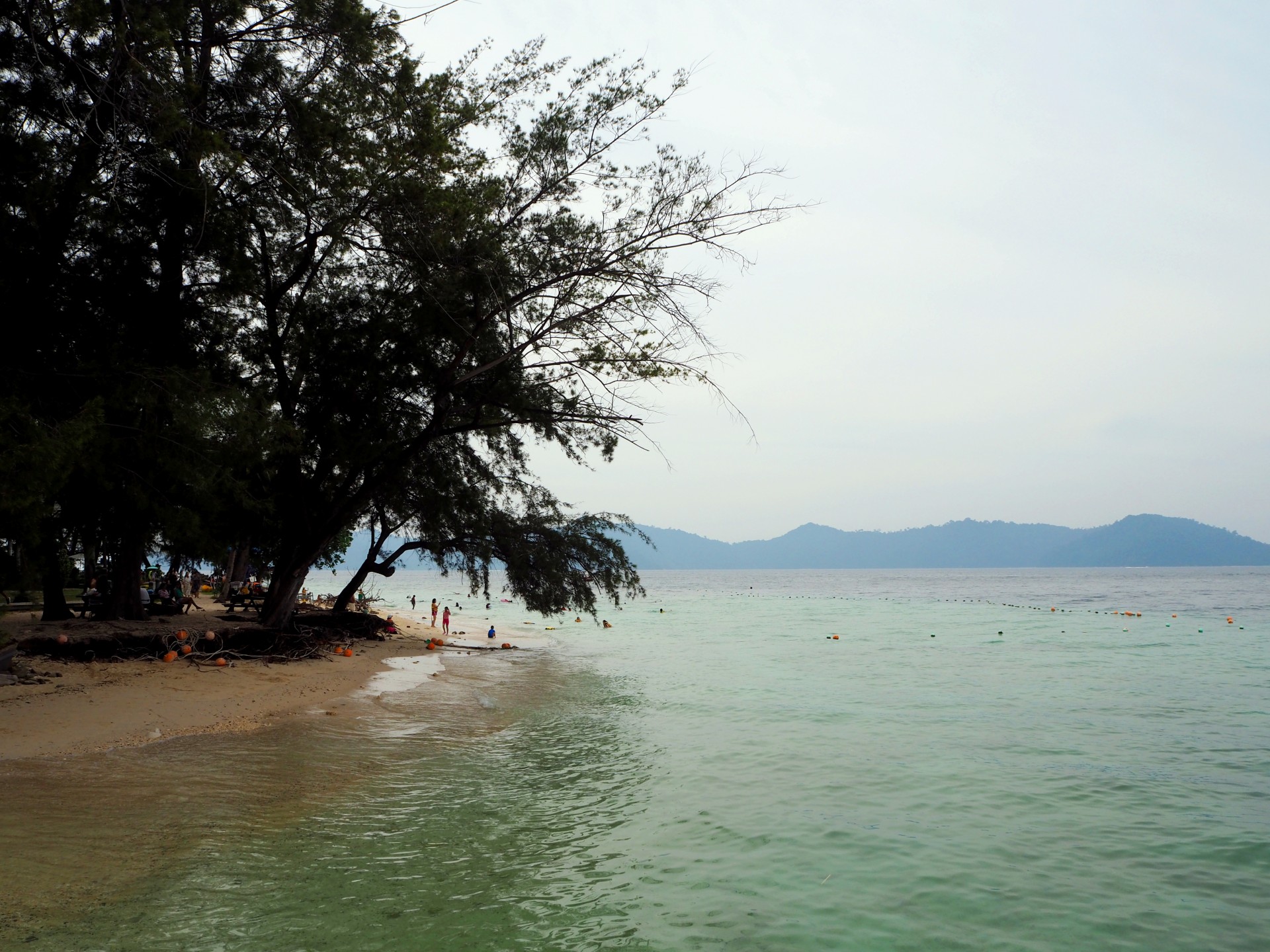 A bit less sun by the time we arrived on Mamutik.

By morning, fever had kicked in on the exhausted elements of my body. There would be no Kinabalu park again. We took the day off instead – lazy breakfast, smoothies and the like – before coming across the market.

It turns out that Sunday is market day on Gaya street, where everything from the usual tourist tat, to actual everyday useful stuff and slightly sad looking pets, are sold. Most eye catching though, was the stall of man named Poh Loh, and his calligraphy. 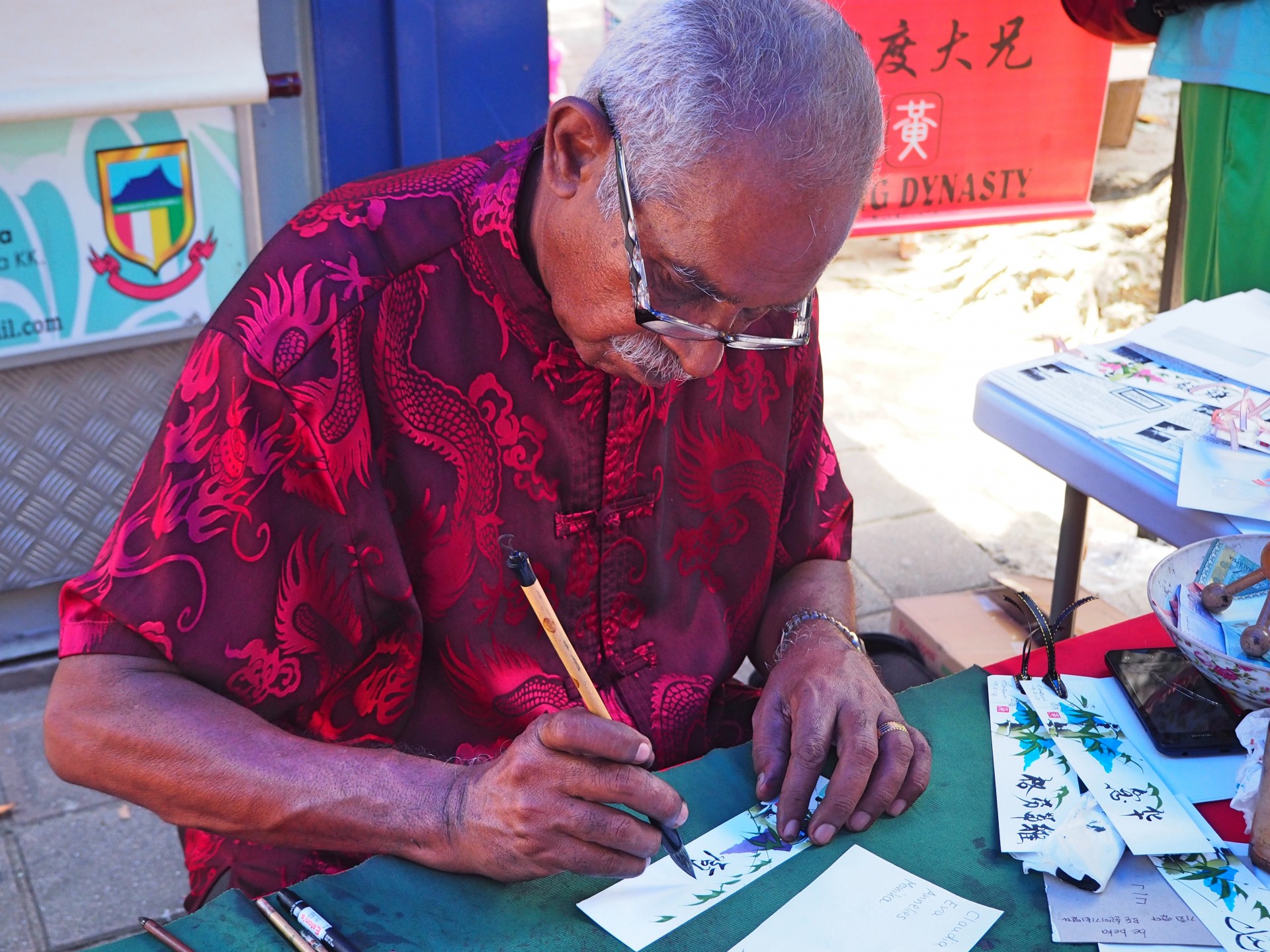 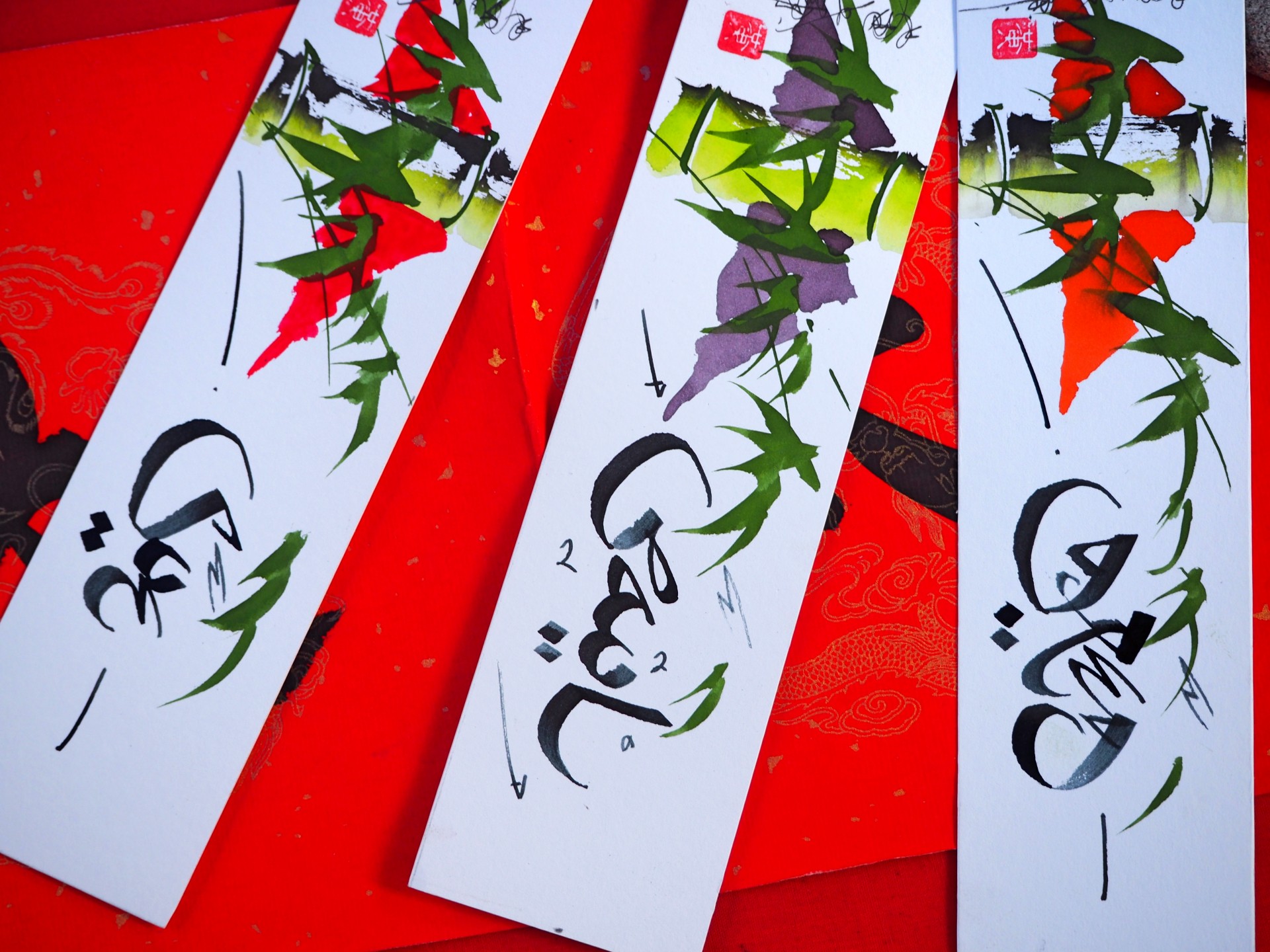 Some of Poh Loh’s creations.

Appearing the most relaxed man in the world, Poh Loh makes bookmarks. Highly uninteresting it may sound, but his bookmarks are very popular, mainly due to his skills in both Chinese and Arabic calligraphy, which are self taught. Each of his bookmarks are hand painted by himself, and then personalised with whatever the buyer would like.

Casey-Lee wanted some of his calligraphy, a bigger piece he had sat behind him, but he didn’t have anything to put it in. Poh Loh said if we waited till he finished up, he would give us another picture for free, and Casey-Lee could name her price for the calligraphy. So we did. And found out all about him in the process. Like how he does everything pretty casually because he wants to enjoy it. And how his (very cheap) souvenirs, that he only sells at the Sunday market, support him being able to spend his time learning new things. He strongly believes that if you enjoy what you do, and do it well, then the work will come to you. And watching him, who could disagree? 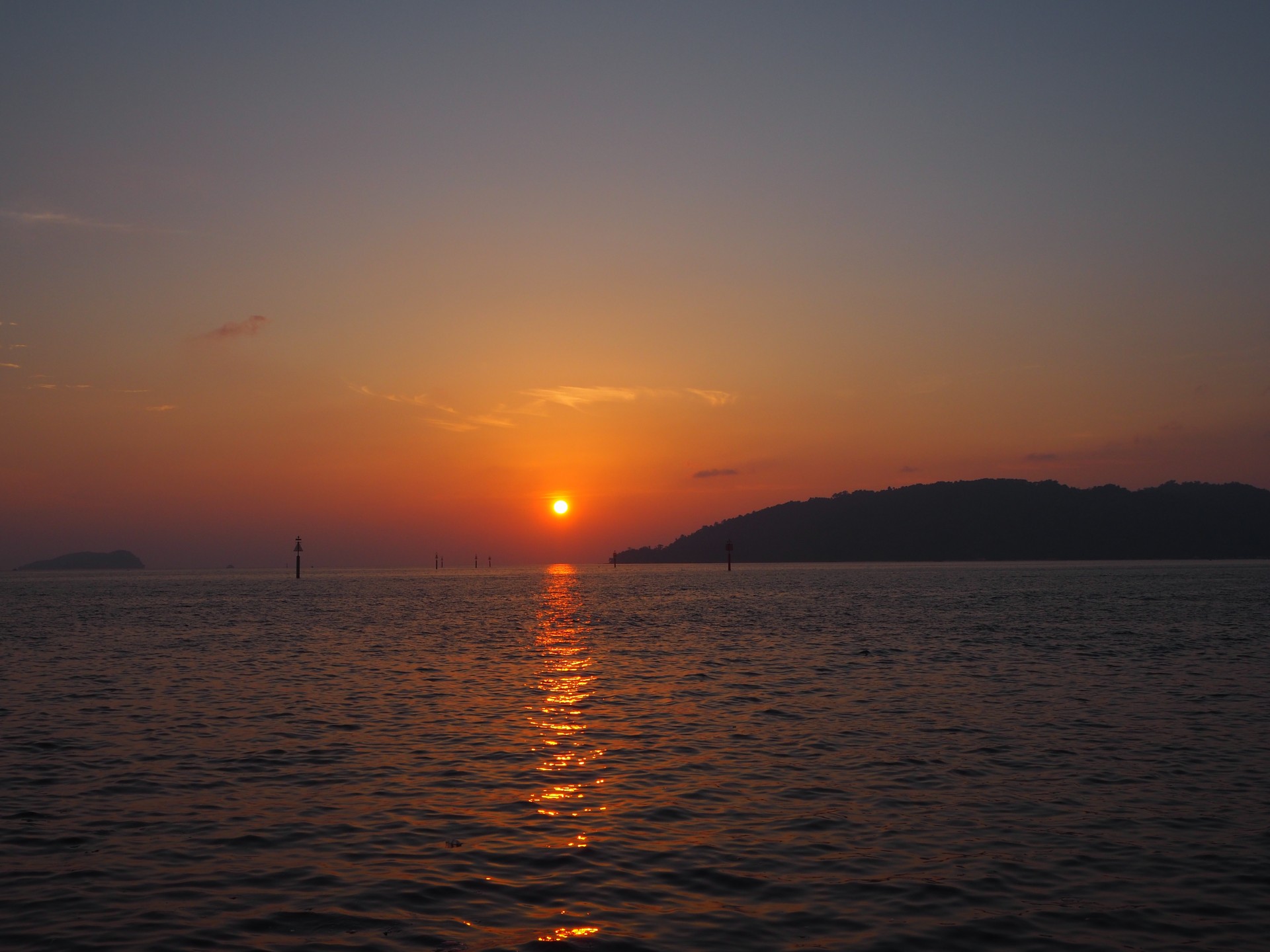 Sunset from the harbour. We dodged a giant rat to get here. 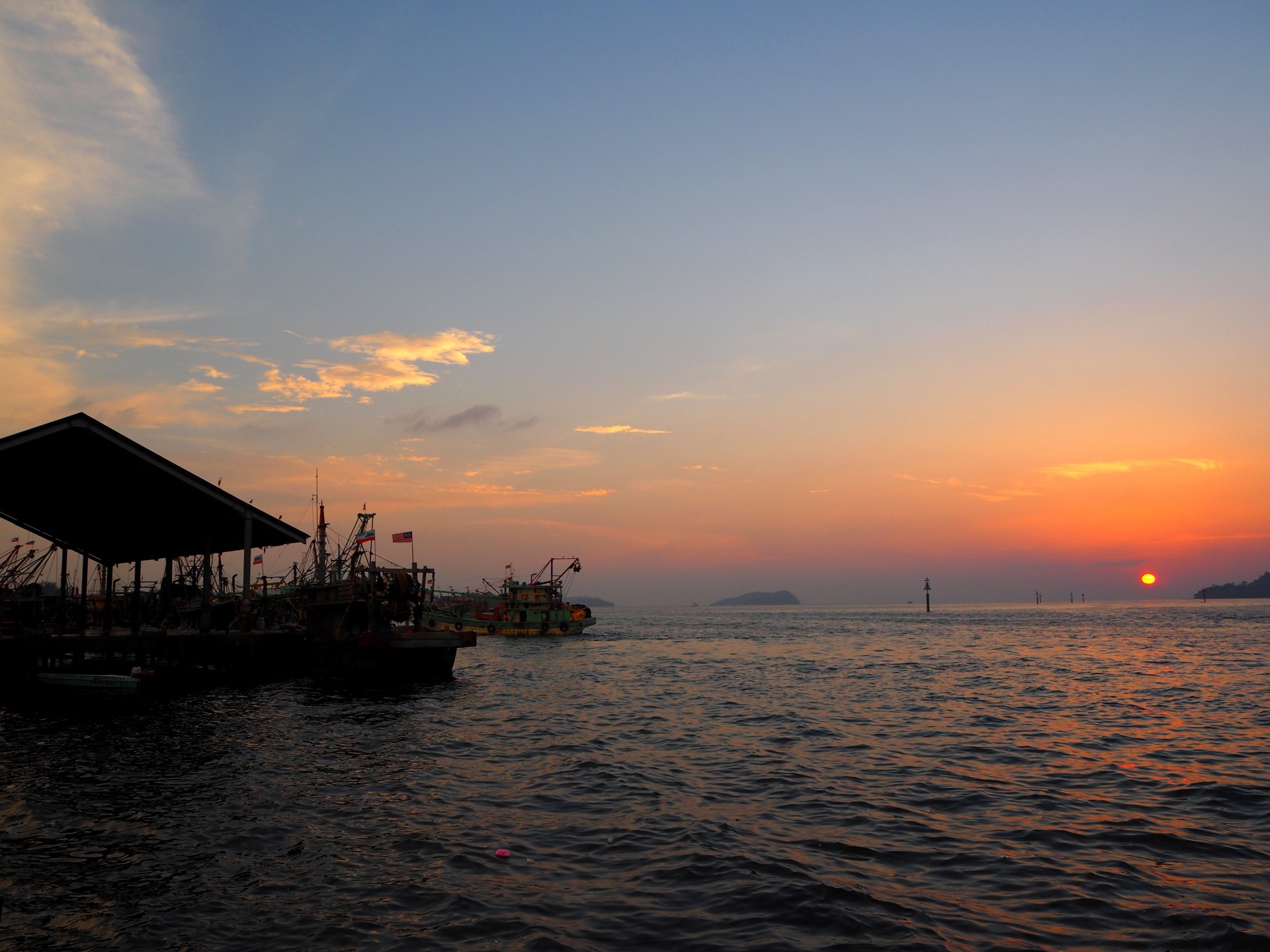 Finally, on our last full day in Borneo, we managed the journey to Kinabalu park. Hooray! At 7.30 we ventured down to the same minibus stand we’d been to a few days earlier, but this time there was actually a bus! The bus to the park doesn’t depart until full, so we still had to wait for a while, but this was mitigated by an encounter with a man named Serge.

Serge was a Swiss man who now called Aruba his home. He had a wealth of stories to tell and we eventually somehow ended up talking about Suriname. Serge had lived there for many years when the country became independent, and he spoke with sadness about the violence of the time. He had happier stories though – ones which had taken him around the world working for various companies, and even the UN, or his hilarious description of native Surinamese women throwing their breasts over their shoulders so they could wash clothes in the river without them in the way. 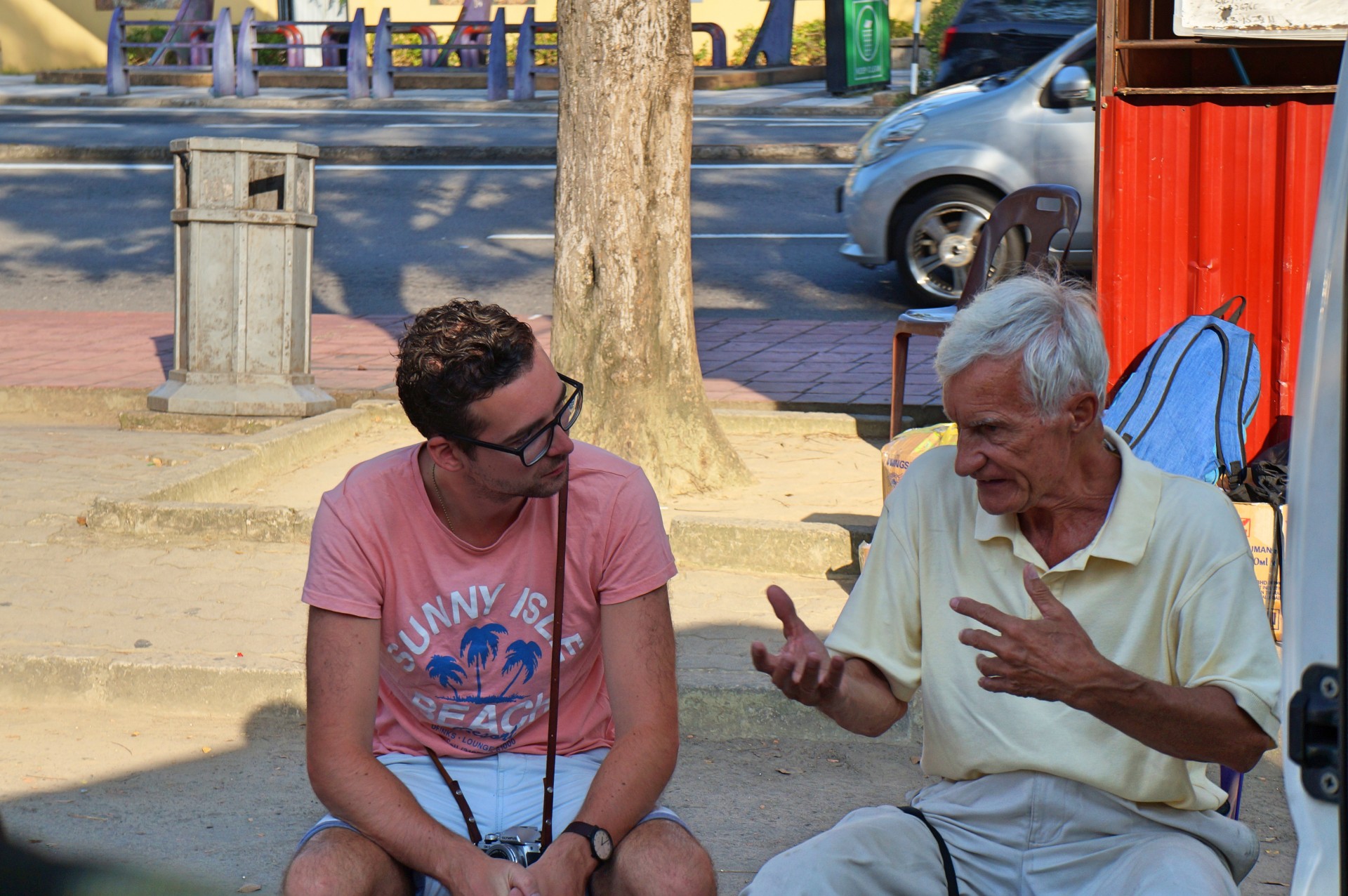 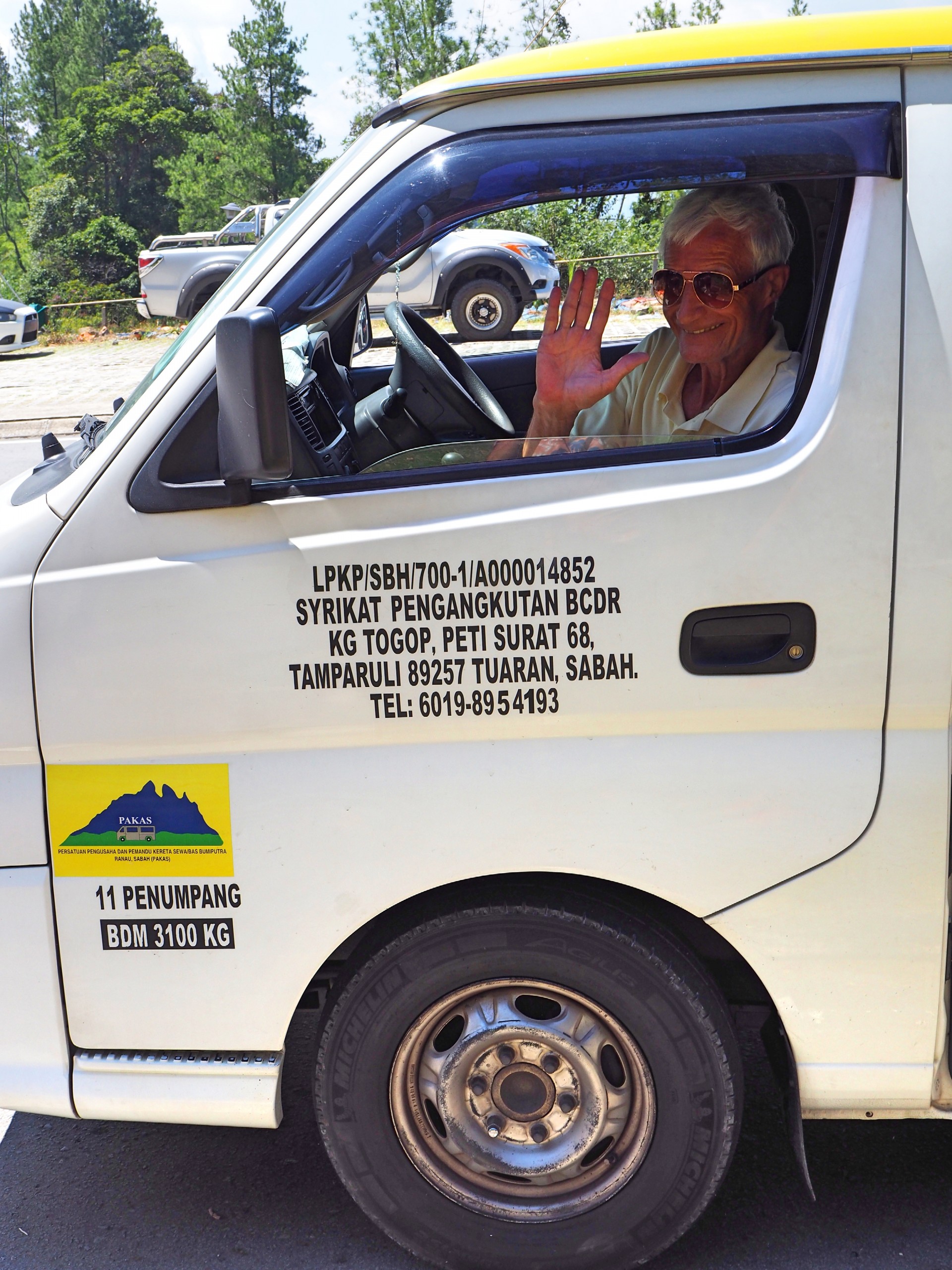 It was still another few hours before we reached the park, partly due to a toilet stop in a random village where I ran the length and back just to get a photo of Mount Kinabalu without the roadside pylons. Mostly though, it was because our driver was pretty slow. Almost ponderous. To be fair, he did have a pretty good reason for this – to be safe. Winding around mountains at high speed in an old minibus is hardly sensible, and apparently a minibus crash had been the reason for the road being closed two days earlier.

As a result of our slow start, it wasn’t particularly early when we arrived at the park. We knew we had to get back for 3PM for the last bus, but planning where to go took an immediate hit when we realised we didn’t get any sort of map with our ticket. Apparently we had to specifically request one, said a couple of hikers we met shortly later. Doh. With the aid of modern technology, I took a picture of their map and we were on our way. Or kind of on our way, at least. Casey-Lee did manage to hit her head on a tree and fall over within five minutes of setting off… 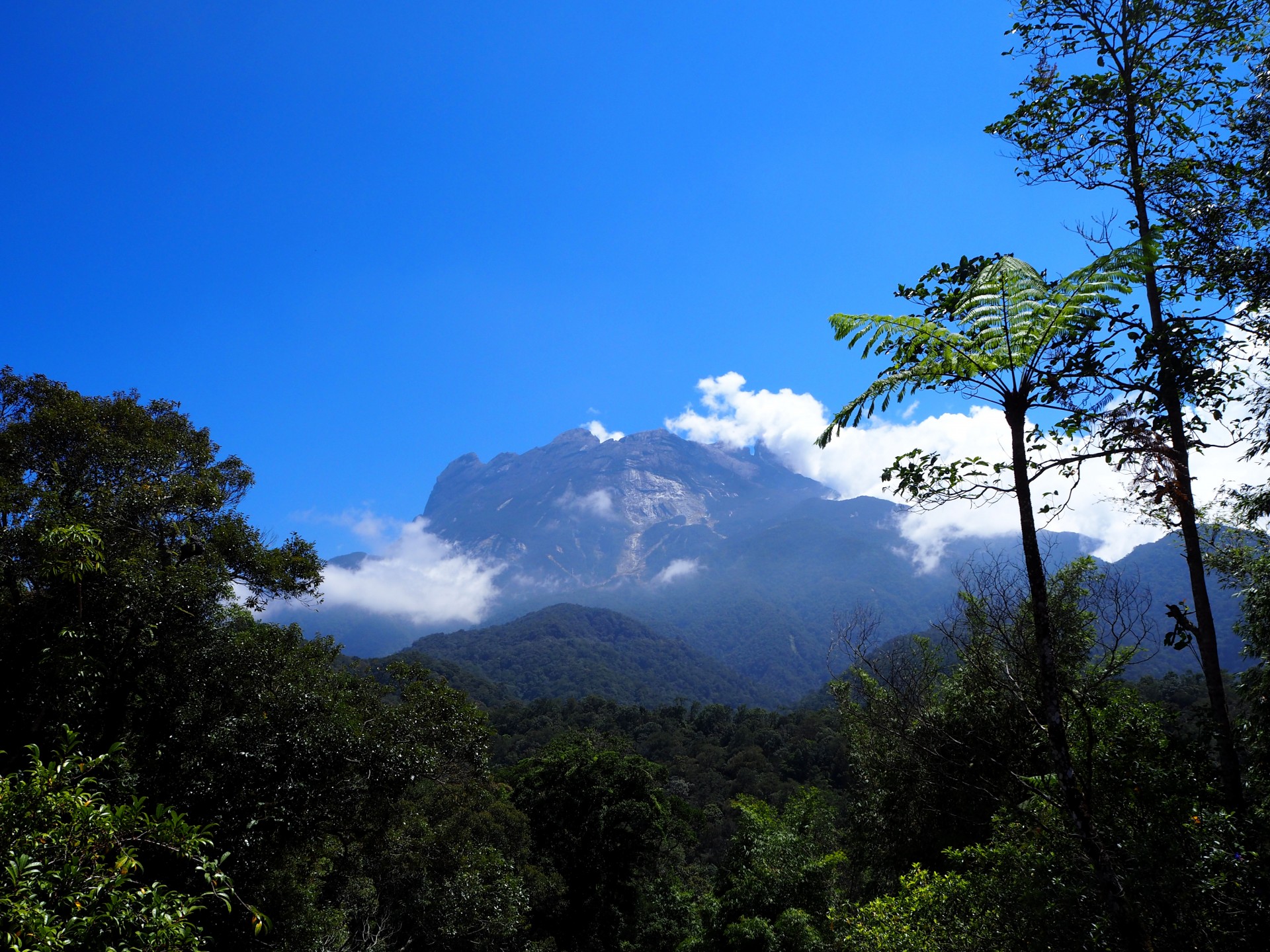 Kinabalu Mountain view from just inside the park. Once further in, we’ll see no more. 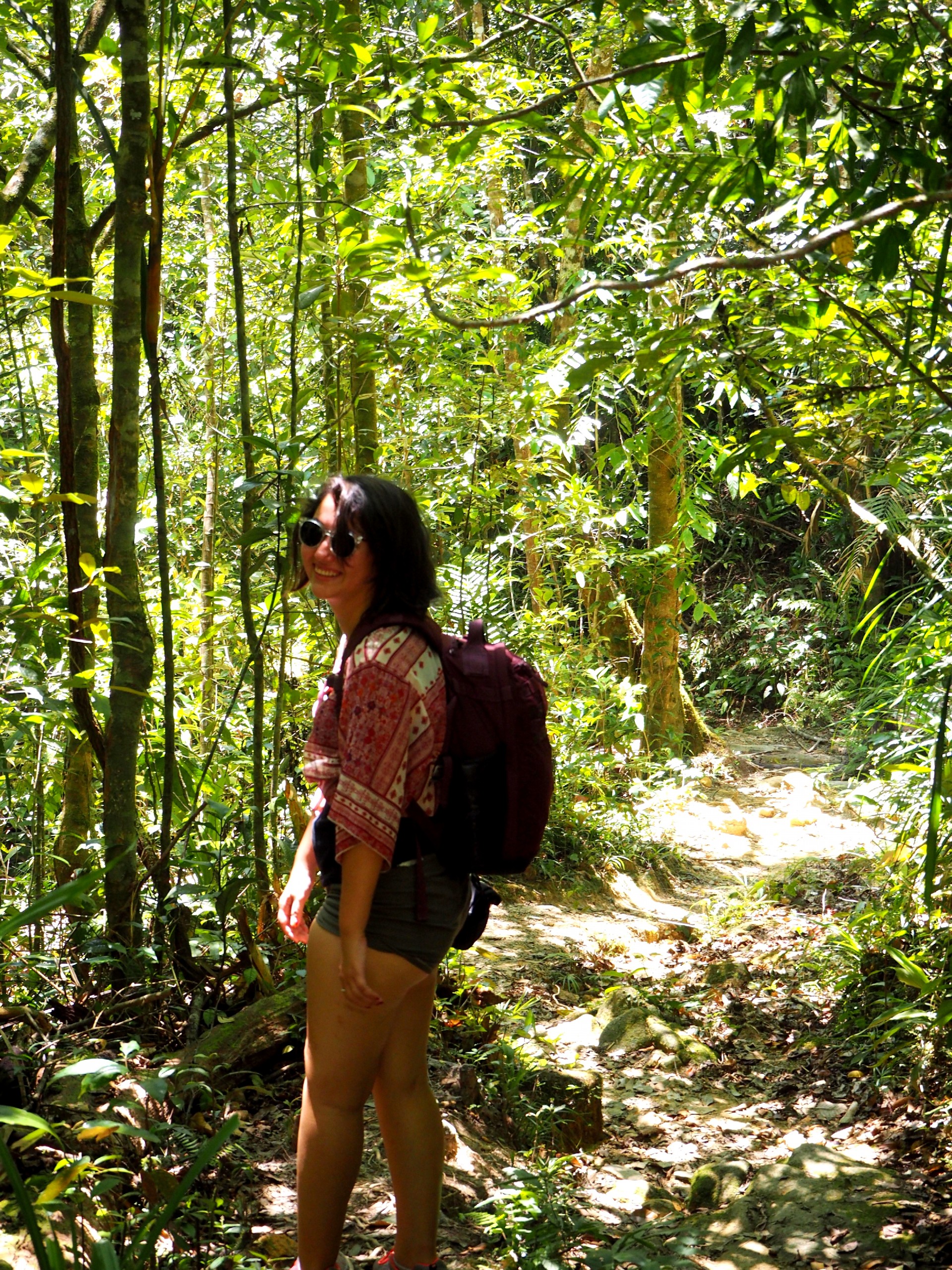 Straight after falling over.

Like much of the national park, the early trails were all under the forest canopy, and while beautiful, we did hope to get an opportunity for some views of the mountain or our surroundings. With this in mind, for the way back I persuaded Casey-Lee that we could take the Kiau View path back, and promptly regretted it.

From the distance on the map I could roughly guess how much time it would take to get back, but knew we’d have to move at a decent pace. The main problem was that the map was so vague that along the way I had no indication of how far we’d gotten. Since we didn’t want to miss that last bus we rushed the whole route, only briefly stopping a few times. For all the effort, the so called “Kiau View” had barely any views to speak of anyway, the dense foliage and thick mist preventing any sight off the ridge further than a few metres. 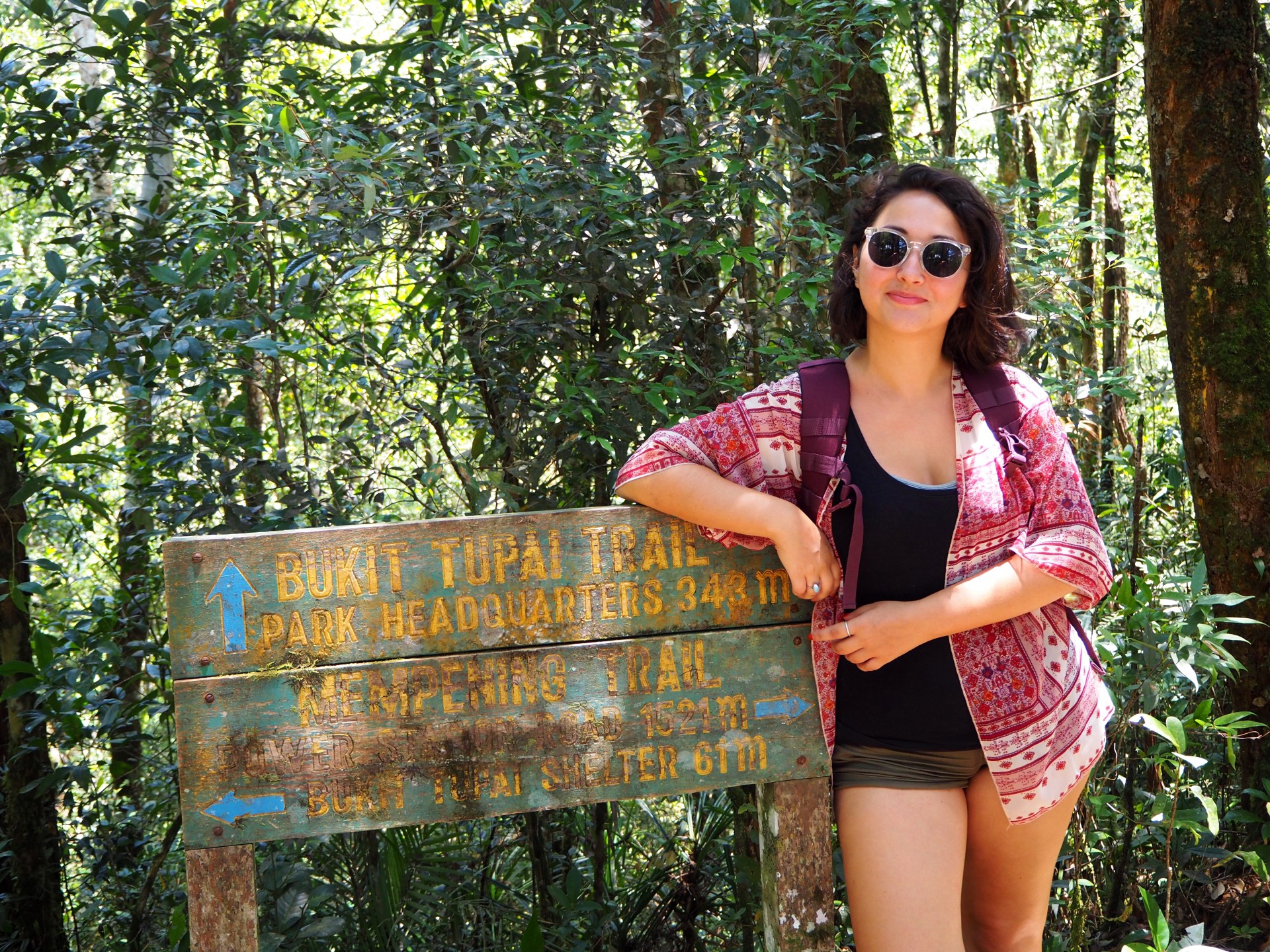 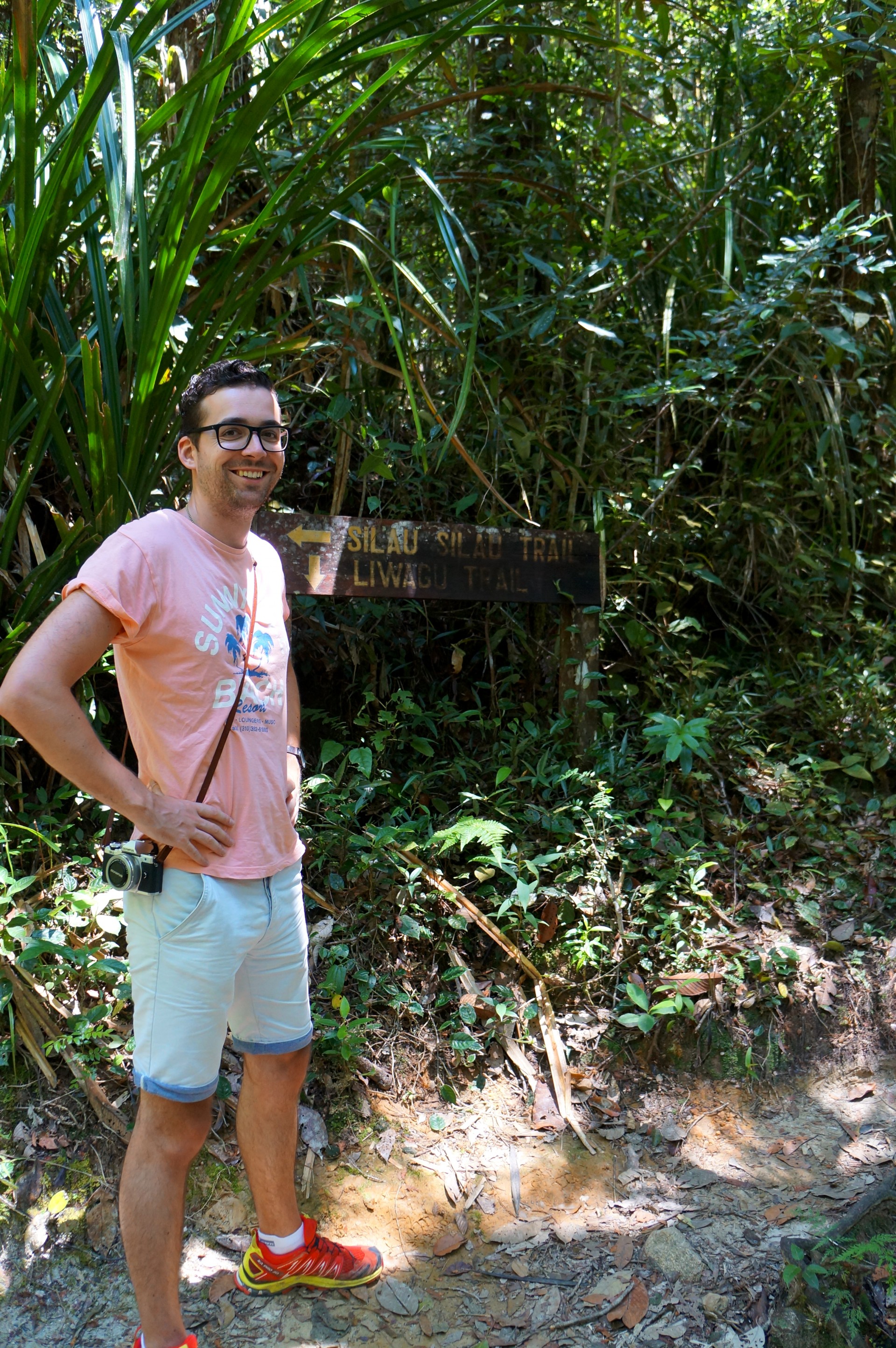 Our efforts weren’t completely in vain at least. We arrived, impressively, well in time for the bus. And despite the lack of views, Kinabalu park had been the stretch of legs that I’d needed for months.

Sadly, at some point we did have to leave Borneo and go home. We tried to have a lazy morning (and a last bit of relaxation) before our flight, but I put paid to that by deciding I wanted to buy a painting I’d found that morning. Oh, and trying to convince the guy that taking it out of the frame so I could transport it was a good idea. After that, it was merely a case of navigating our way back to the airport and flying back to Fuzhou. At least that bit went smoothly… 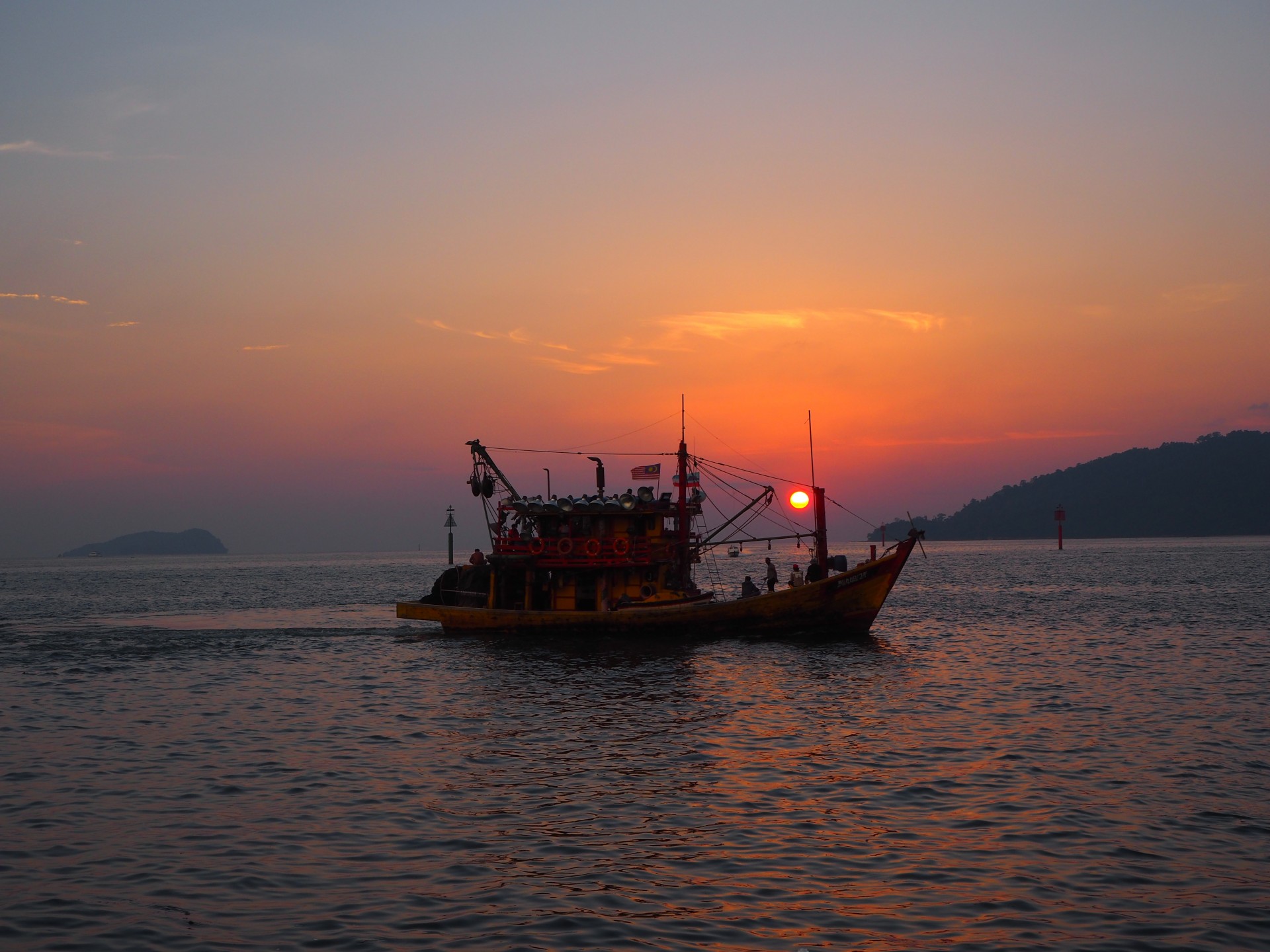 A sunset and a boat!