As the title says, this is Borneo Part Two. If you’ve missed out on Part One, probably best to read that one first. It is chronological, after all. Part Three next week!

We took the early bus to Sandakan the next morning. The previous evening we’d come up with a plan to enable us to get the most out of our time in Borneo, but hopefully still have enough lazy days to rest up after Summer Course. The first part of it was the early bus. Just before the end of the 5-6 hour journey, we planned to get off at the Sepilok Orangutan Rehabilitation Centre, in time for the day’s second feeding. That didn’t happen. Instead, our grand plans went awry almost immediately.

The bus took the same road into the interior as our trip to Mari-Mari, only further. Further up the winding mountainsides, further through the dense forests and further into isolation. Odd towns dotted the roadside, but once more than an hour from Kota Kinabalu, the little farmsteads disappeared. 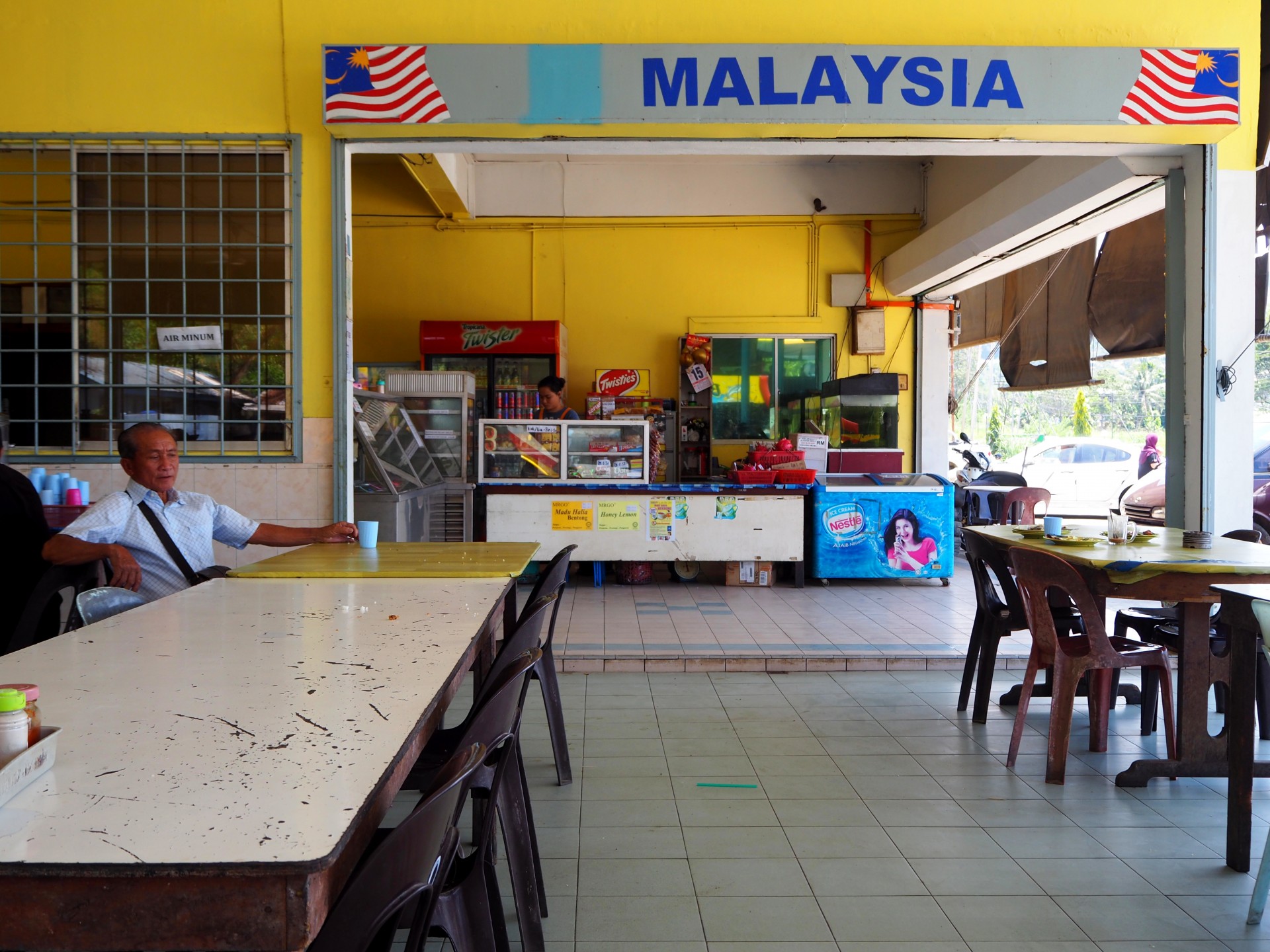 A quick pit stop and a reminder of where we are. 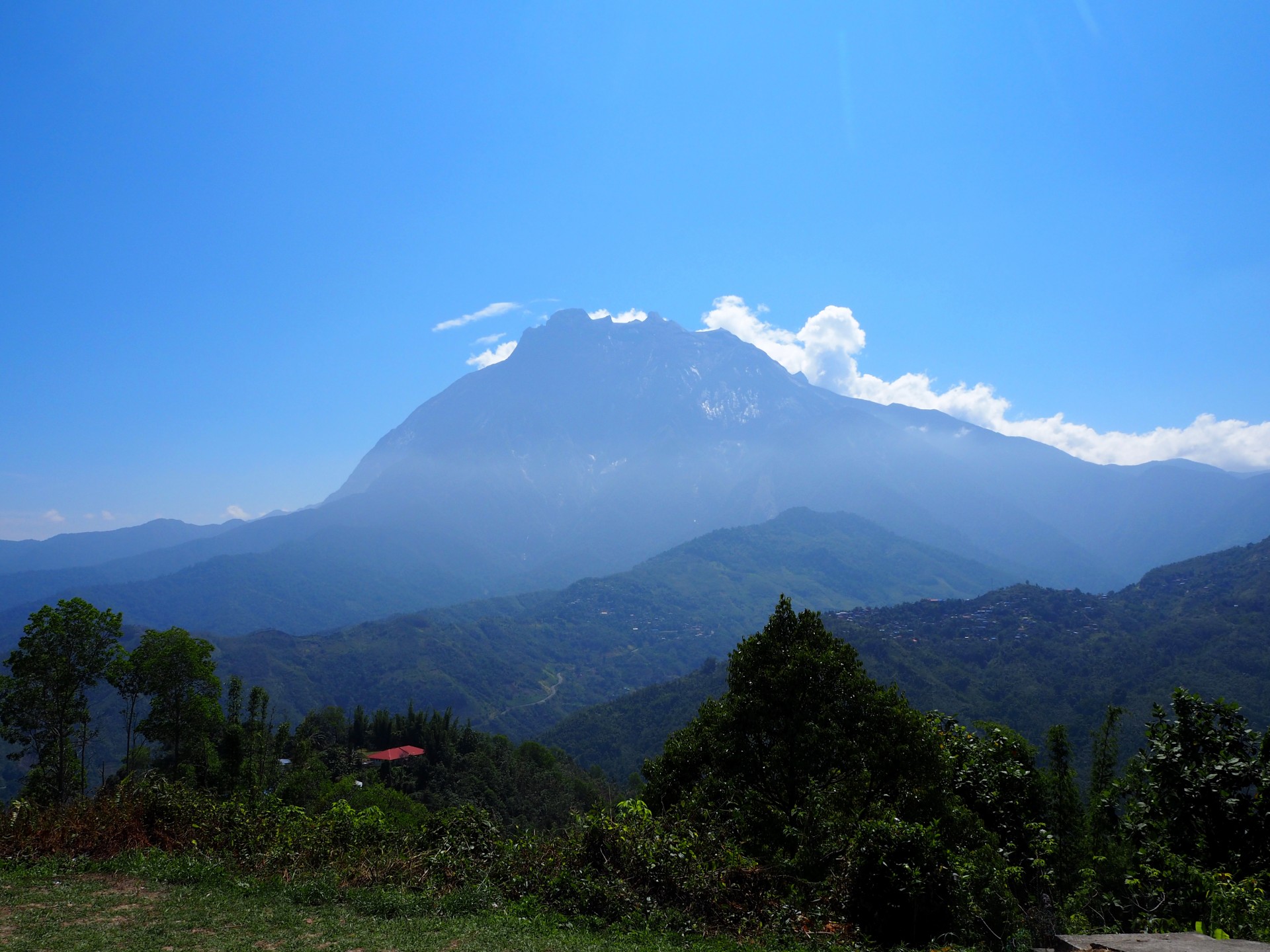 Finally! Not a roadside pylon in sight…

A couple of hours out, as the bus twisted around the undulating slopes, Malaysian Borneo’s most famous landmark loomed into view. Mount Kinabalu. From a distance it dominated the horizon, towering above the tiny mountains surrounding it. Close up, it was even more impressive. Rising up to its full 4095m, waterfalls cascaded over the edge and its onyx slopes glistened in the sunlight like nothing else around.

Once clear of the mountain, the road descended back toward the rainforest. Only, there was little to be seen. For the majority of the rest of the way to Sandakan all we could see were plantations. Endlessly depressing palm oil plantations stretching from horizon to horizon, where jungles and wildlife should have been. Normally palm trees signal sun and sand, but here they seemed more of an arbiter of death. And since I was on the lookout for our early stop off, I was forced to continue to watch in bleak dismay. 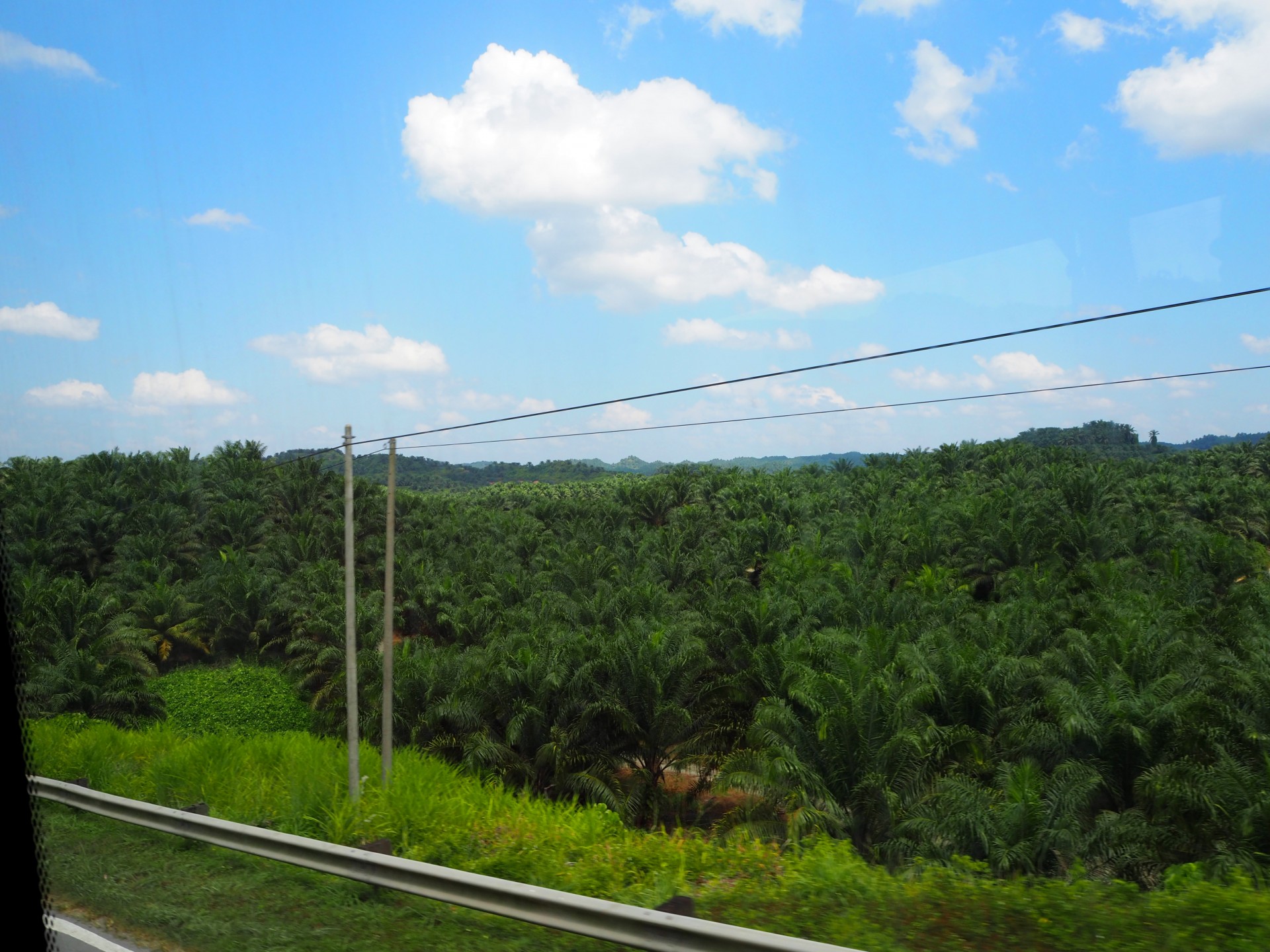 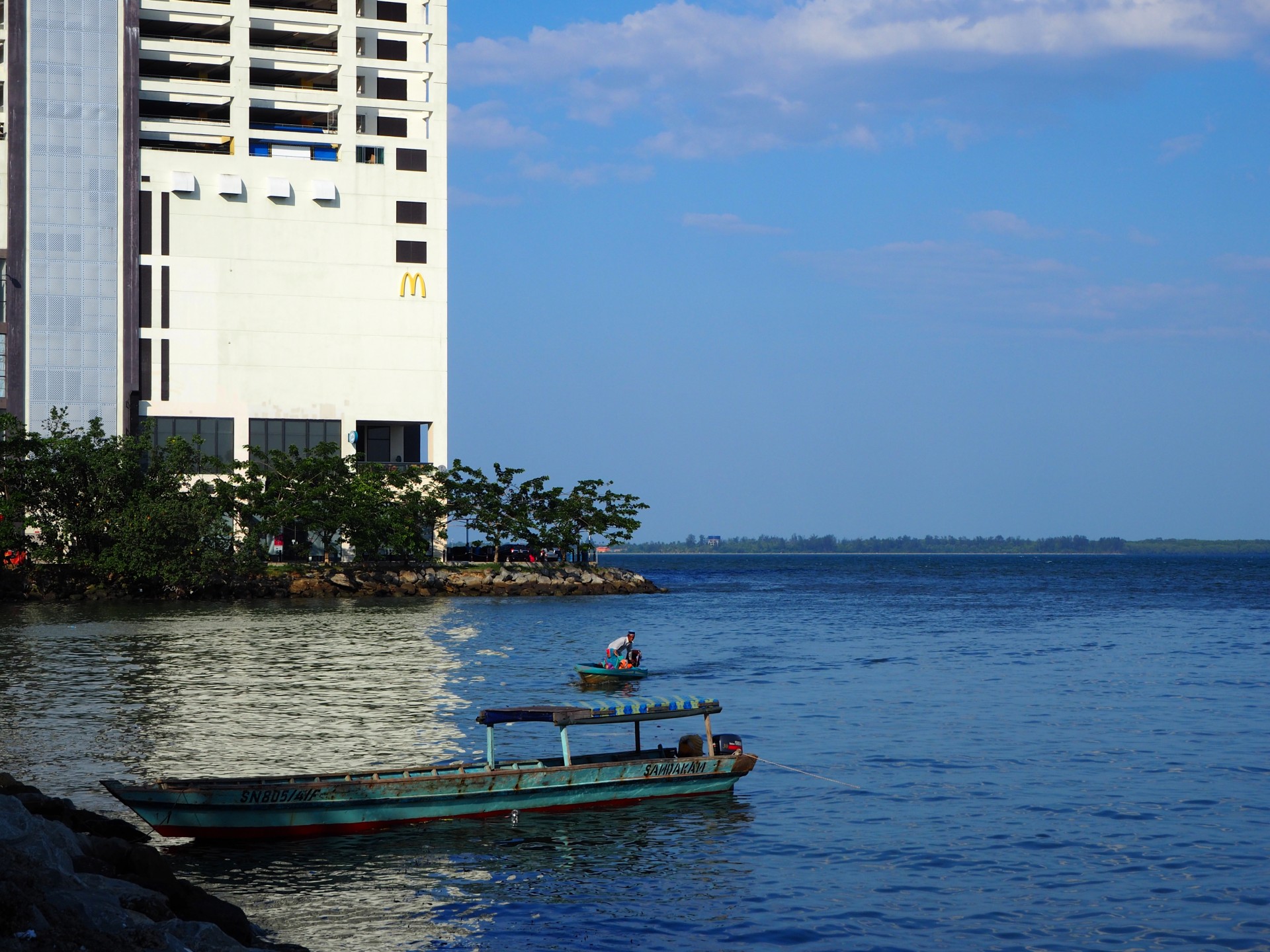 Dinner by the water.

This section of the road seemed to continue forever. So long, in fact, that by the time we reached the turn off for the orangutan sanctuary, we’d missed the feeding time and it would have been closed. The decision was made to continue to Sandakan, and at least get an earlier evening.

Sandakan has obviously changed a lot over the years. Once capital of the British colony of North Borneo, it was heavily bombed during World War II and is known mostly for the infamous Death Marches, where thousands of sick and malnourished POWs were marched across Sabah. Almost all died.

Now the town seems almost peaceful. Aside from our taxi driver, of course, who seemingly wanting to make up for our slow bus steamed in at top speed, Sandakan was a sleepy port town where we only had mild difficulty finding our hidden hostel. Dinner by the seafront and some sunset views from a lookout point only 80 steps above (actually 239, to Casey-Lee’s chagrin) helped us push the plantations from mind. At least till the next day. 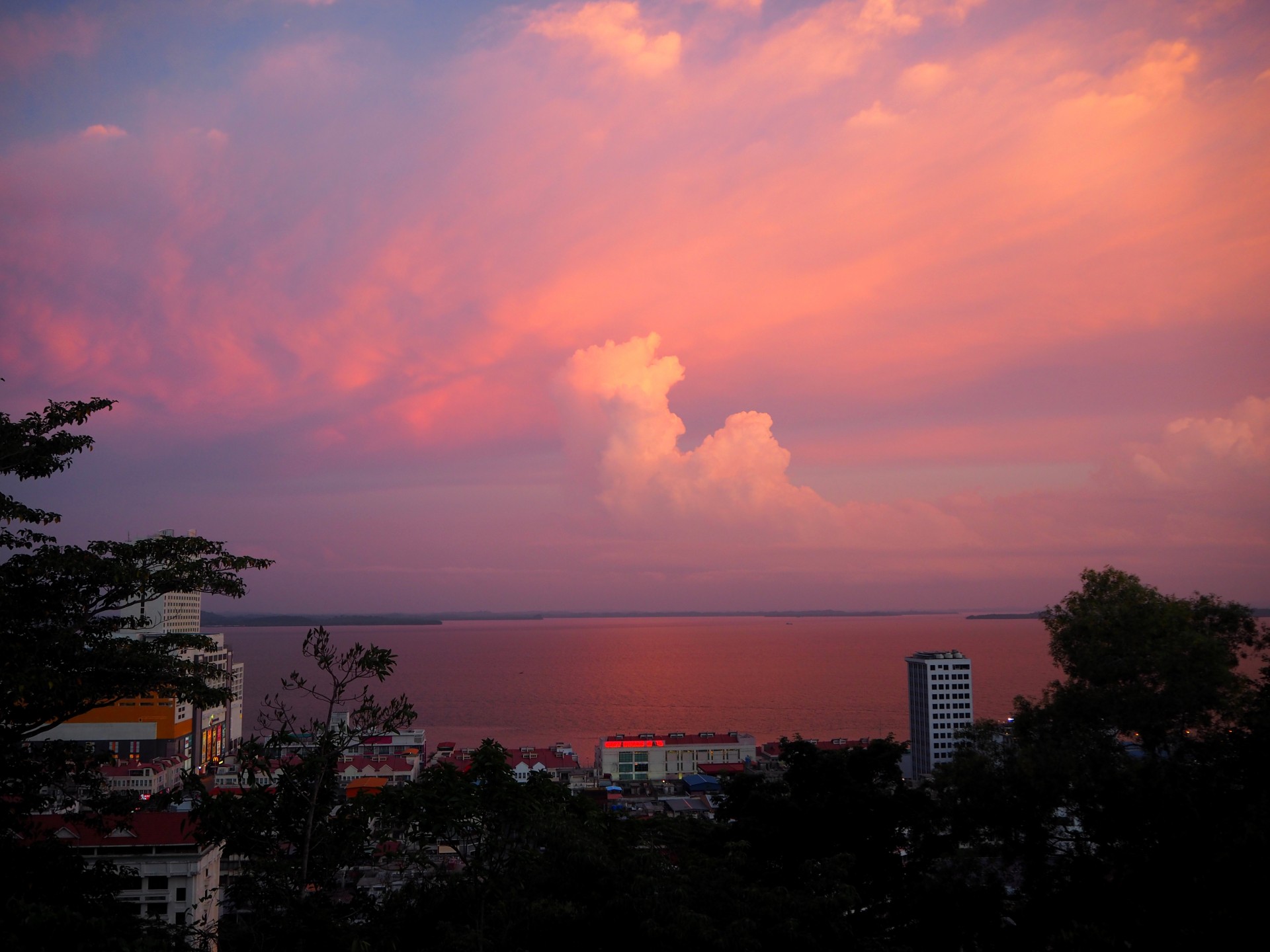 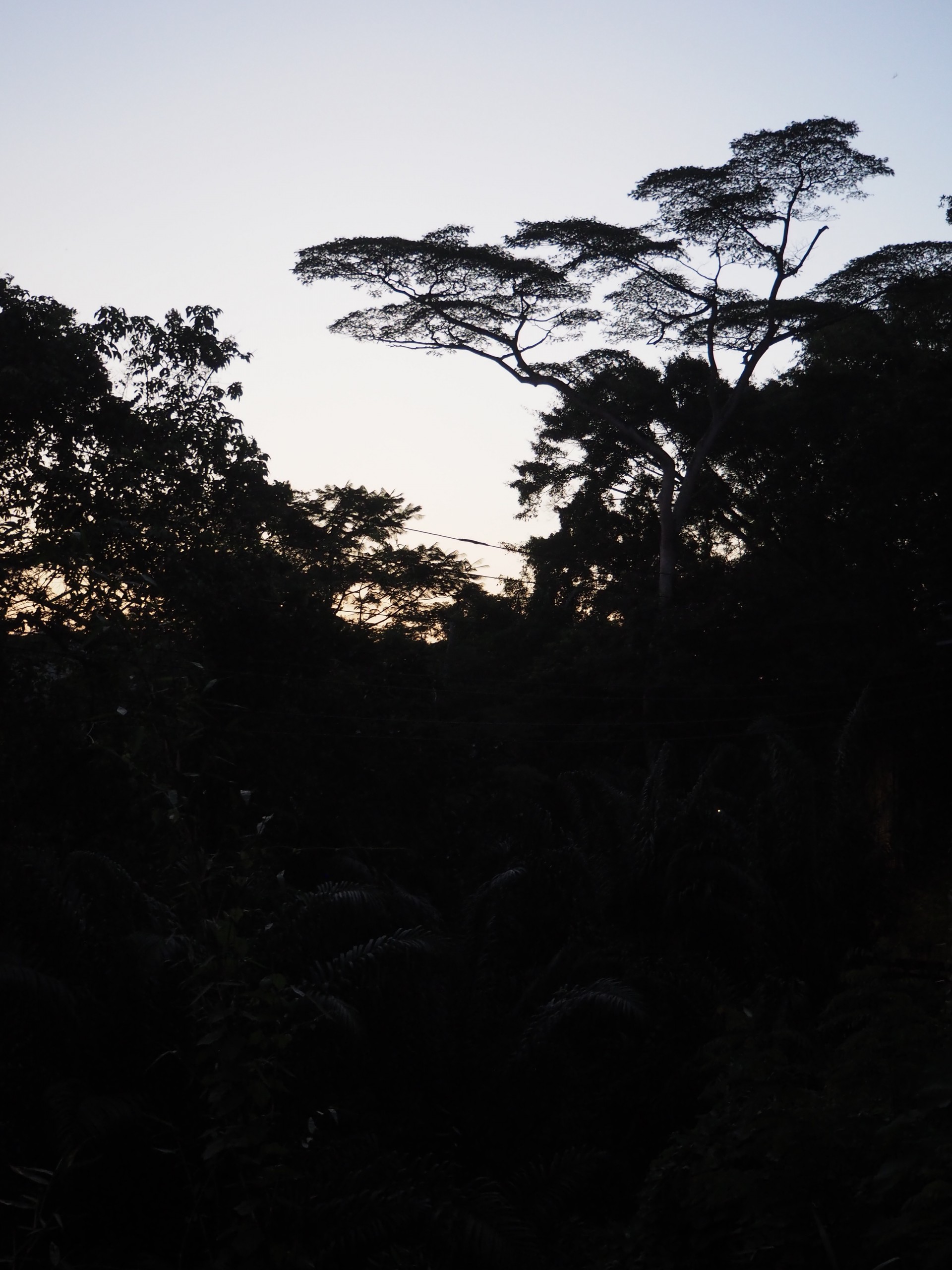 Descending in the dark.

Our stay in Sandakan was short lived – early in the morning we said our goodbyes, accidentally left our key deposit behind, and set off for Sepilok, finally, to see the orangutans. Taking a taxi so we could get there early, our laid back driver presented a question that would be revisited several times over the trip.

“A Brit and a Canadian? How does that work?” 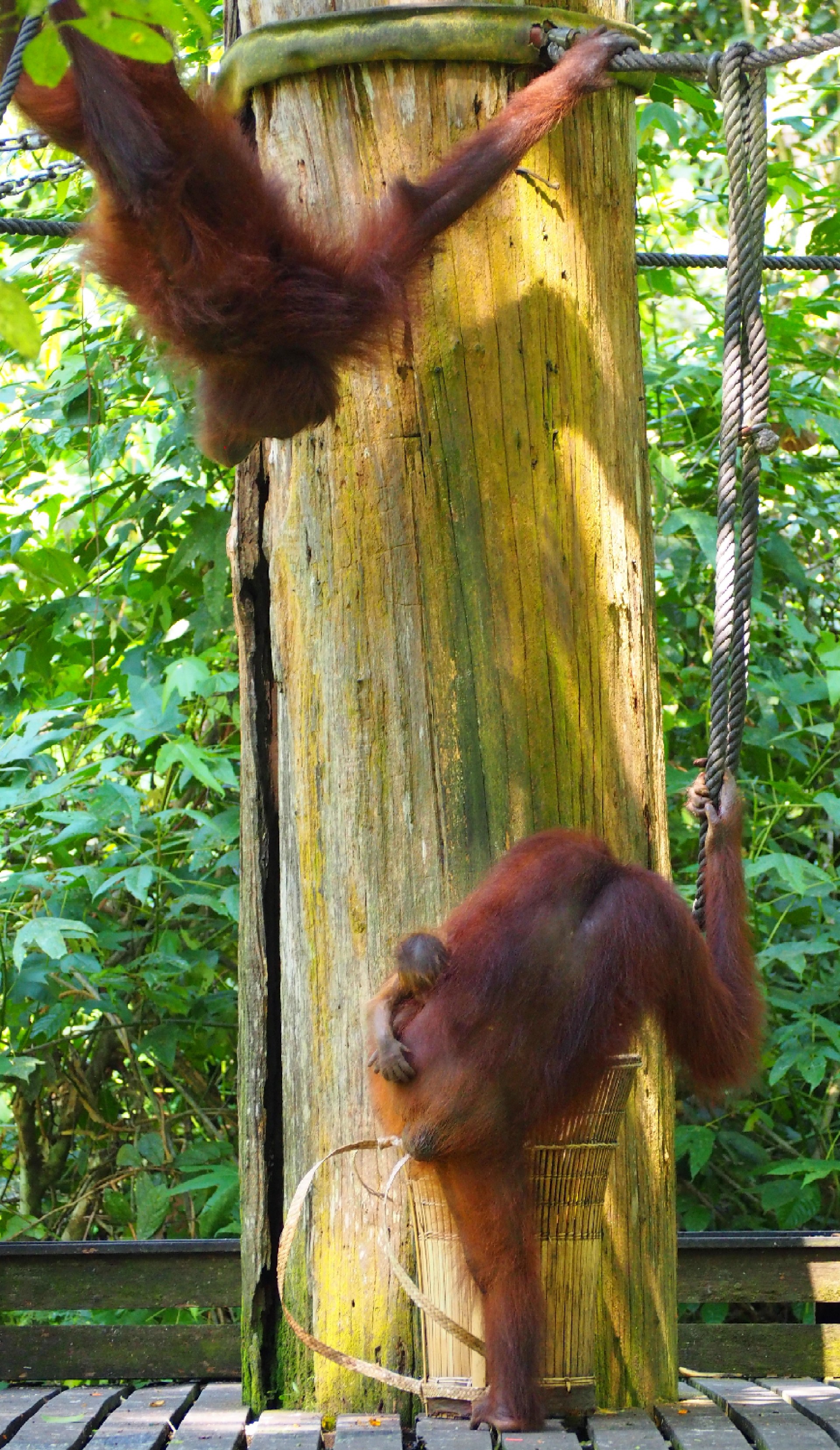 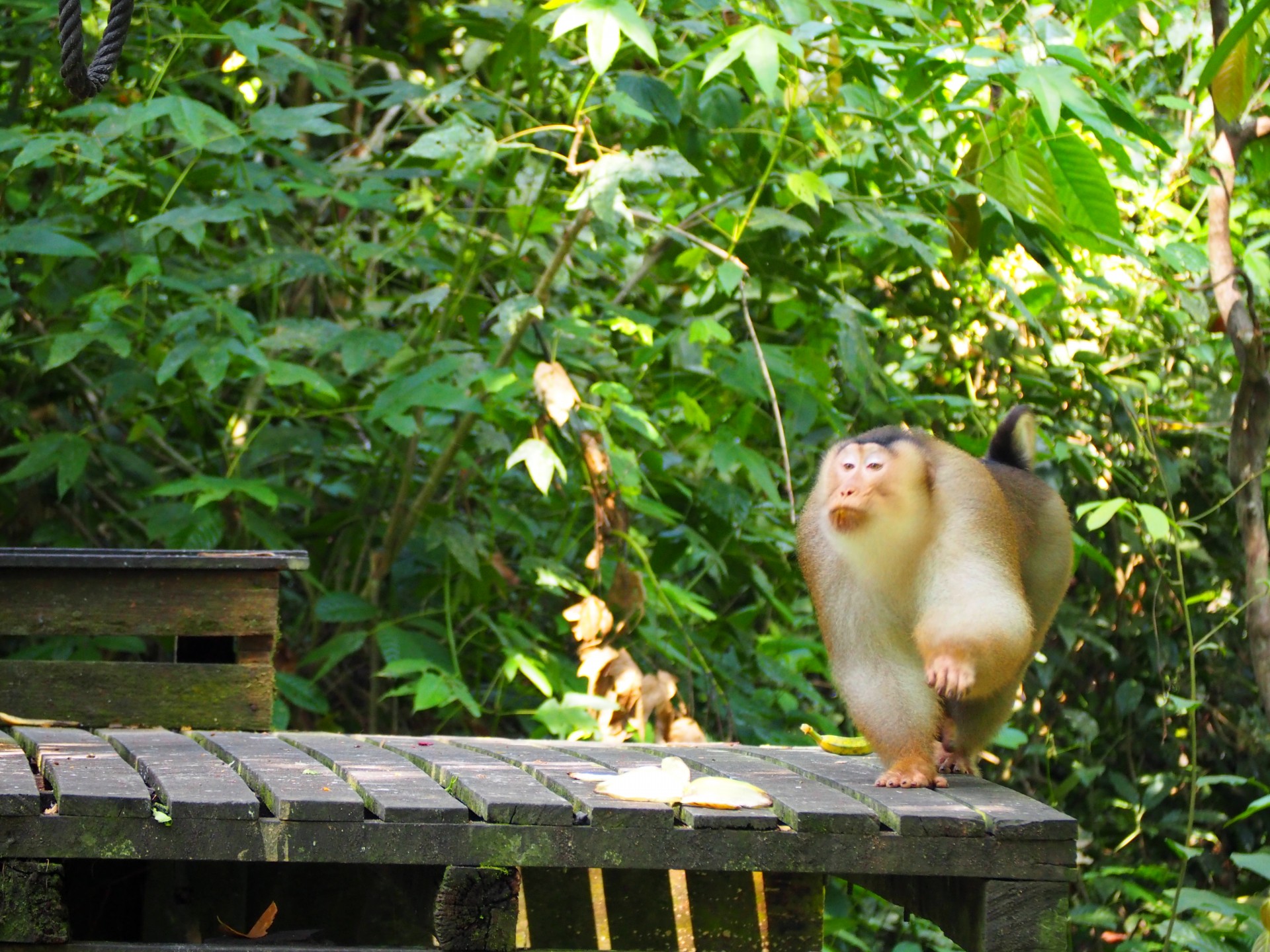 After a bit of a kerfuffle making sure we weren’t taking anything we shouldn’t be, we headed into the rehabilitation centre. It wasn’t feeding time yet, so we stopped by the youth sanctuary and promptly squashed ourselves amidst the dozens of others taking photos. Here, behind a glass pane, we got our first sight of the great ginger giants. Using practise ropes, the apes here swung from platform to platform, sometimes graceful, sometimes incredibly ungainly. They seemed pretty chilled out, so much so that when a large monkey appeared in search of food to steal, one of the youths offered him theirs.

Moving over to the feeding site, the monkeys there were already preparing a heist. These were in for a fight though, as just as the food arrived a female orangutan, complete with clinging child, arrived to impose her will on proceedings. While she remained interested, the monkeys (and particularly one large, self important one who fancied himself the boss) quaked in fear of retribution. As soon as her interest waned, the gang swarmed in and took the leftovers. 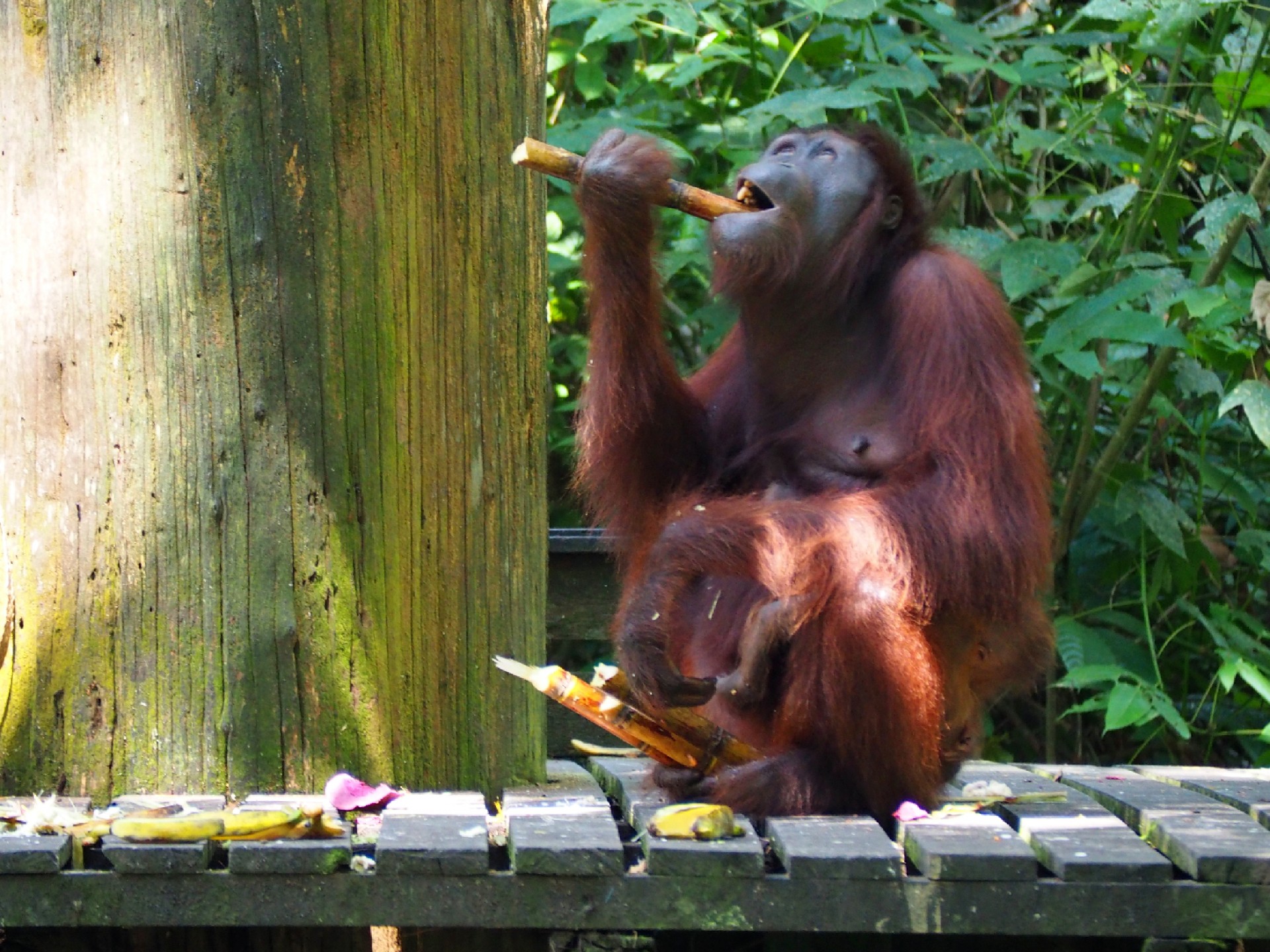 She’s not worried about the monkeys. 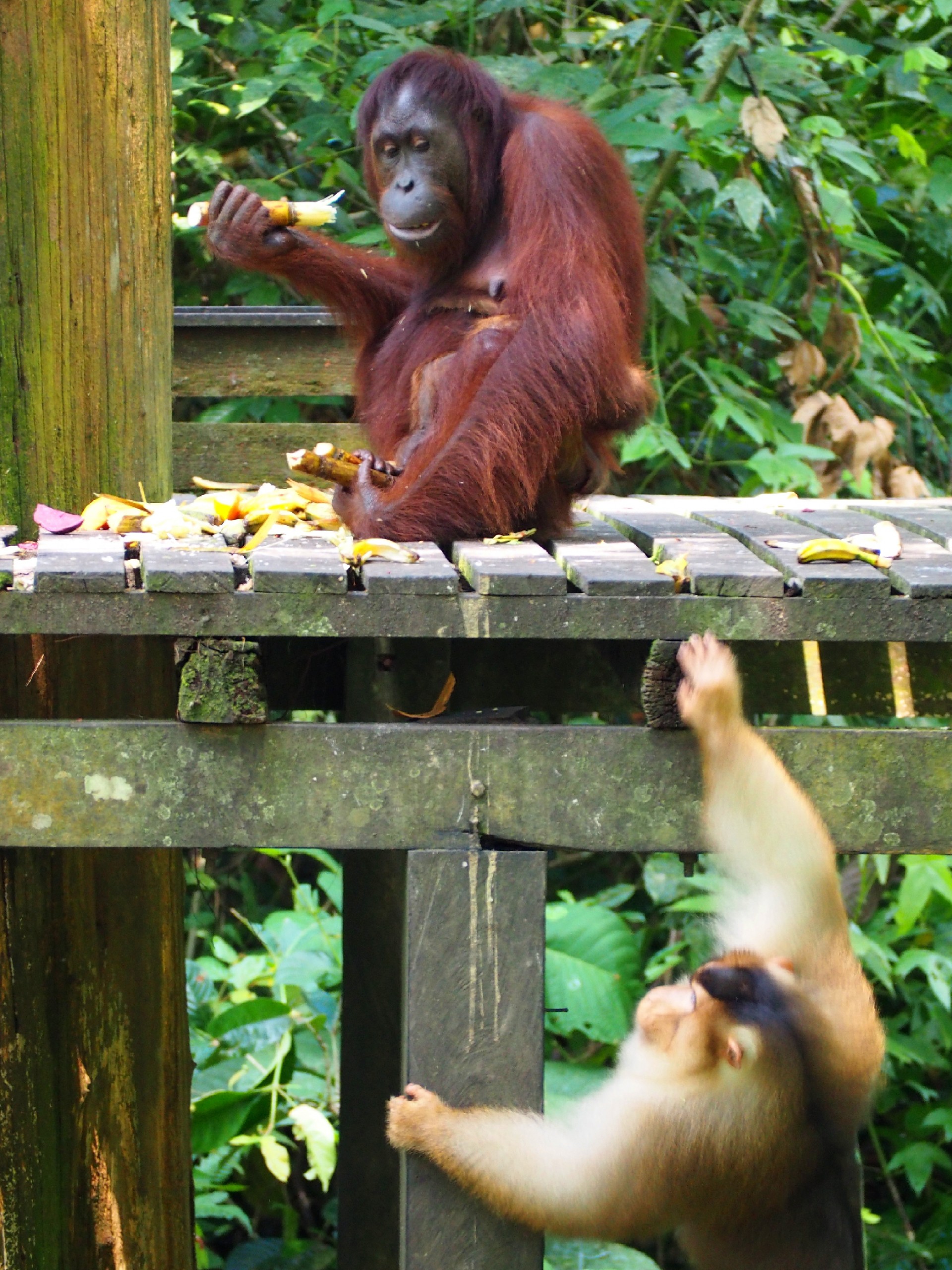 But they’re worried about her.

From here we were off into the jungle proper. Borneo is regarded as a place with great biodiversity, but such is the scale of deforestation there are not as many places to see it as may be thought. Strangely, this does apparently make it easier to find wildlife – the animals have just been squashed into smaller and smaller areas. One of the most accessible areas is Sukau, along the Kinabatangan river, only a couple of hours away.

We’d booked our trip with Mr Aji, a name that had cropped up time and time again when I’d searched for good agencies on the net, as a man who was remarkably in tune with the environment, and could imitate practically very call of the wild. Legend has it that the great Sir David Attenborough sought him out when filming in the area. Crucially, tour groups would be small. We met his son Jerry in the Sepilok car park. 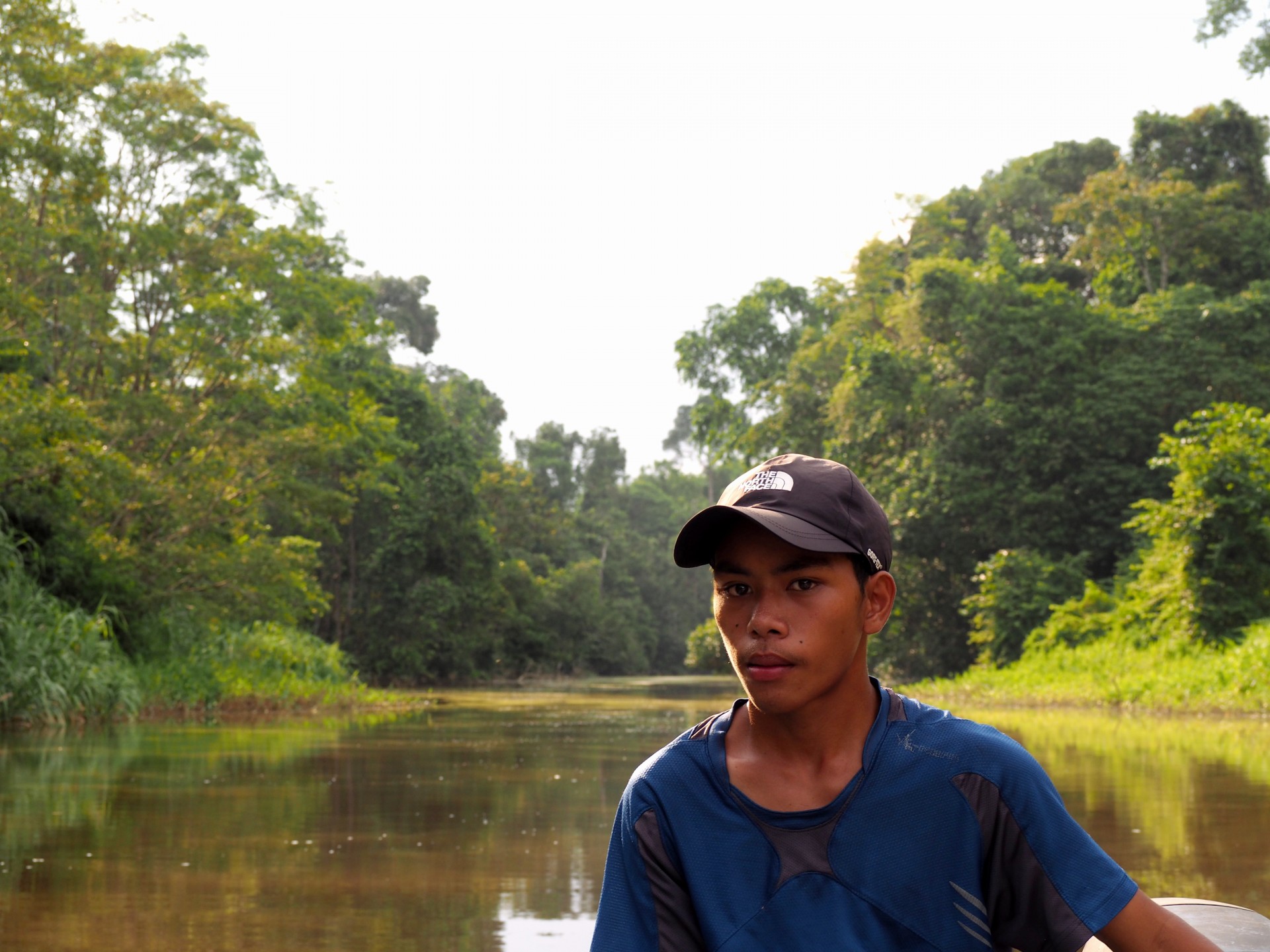 Someone’s got to drive the boat. 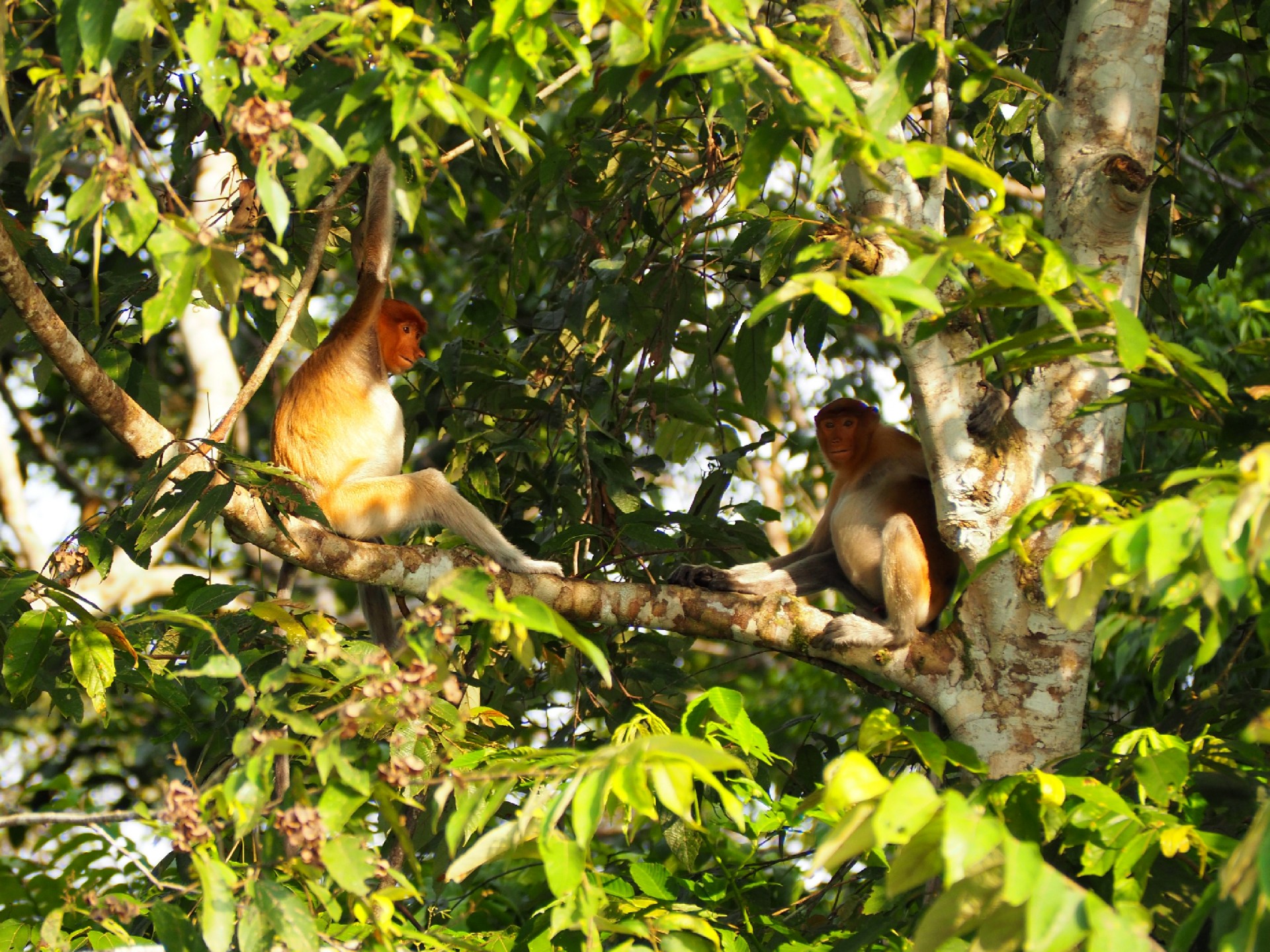 Interrupting these proboscis monkeys and their chat.

Mr Aji Expeditions is a family run affair. Jerry, the younger son, dressed in shirt and driving a saloon, was obviously more part of customer relocation and tour organisation. Wafi (like Wifi, he told us), with his floppy sun shielding hat and camo clothes, was part of the tour experience. This family organisation was good and bad. Good because Wafi was able to carry on his father’s desire to protect the wildlife of Borneo. Bad because we would actually be taken around by Mr Aji.

It seemed a shame, but the slightly shy Wafi made up for it as he grew on us over our two days. He might be missing his father’s reported eagle eye though. Early on in our boat trip that afternoon we spotted an orangutan hanging lazily in the trees. Or was it what it seemed? After a few minutes of swapping binoculars about, and Wafi being as unsure as the rest of us, we came to the awkward conclusion that it was probably a leaf. A leaf, damnit. 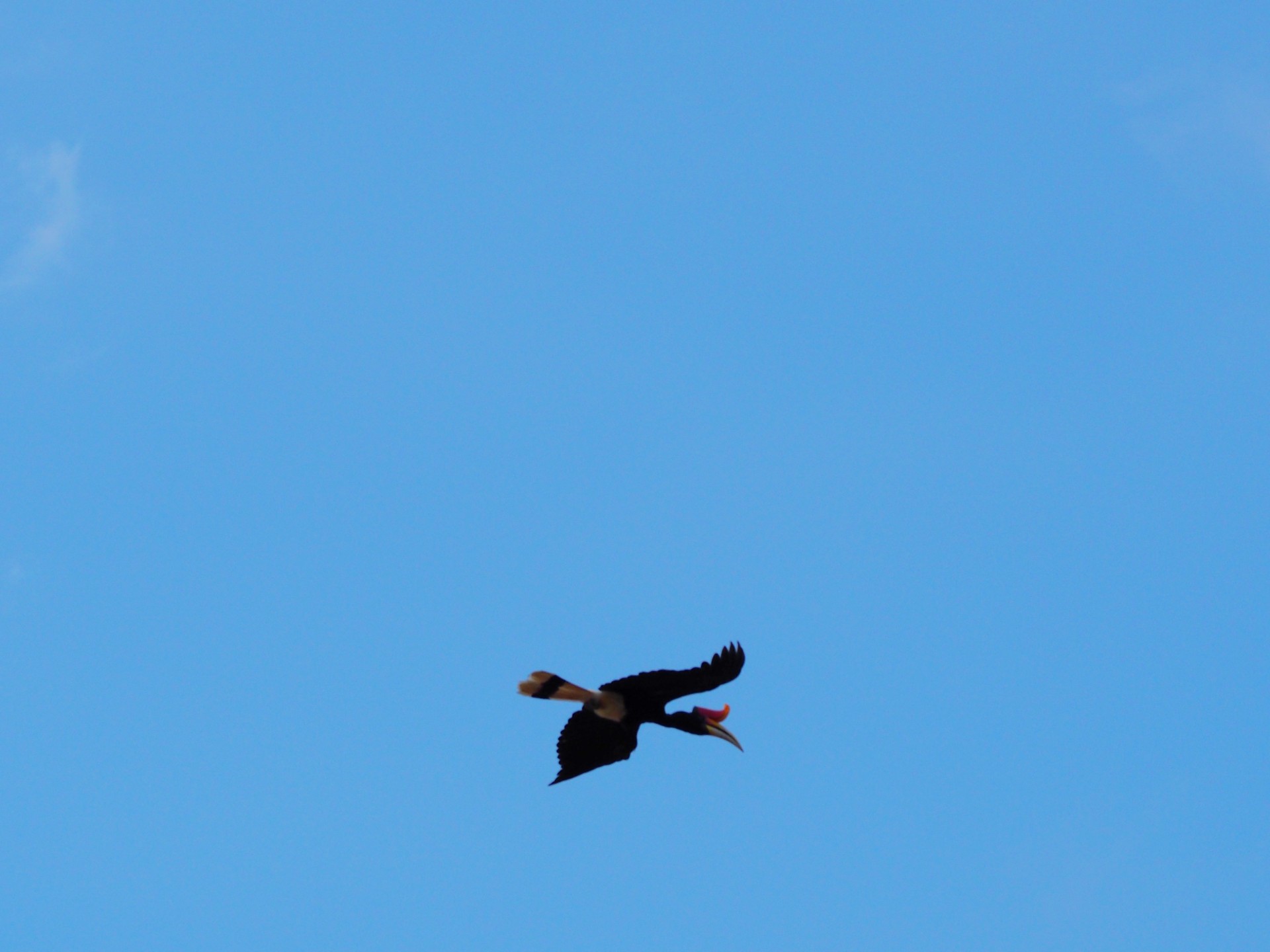 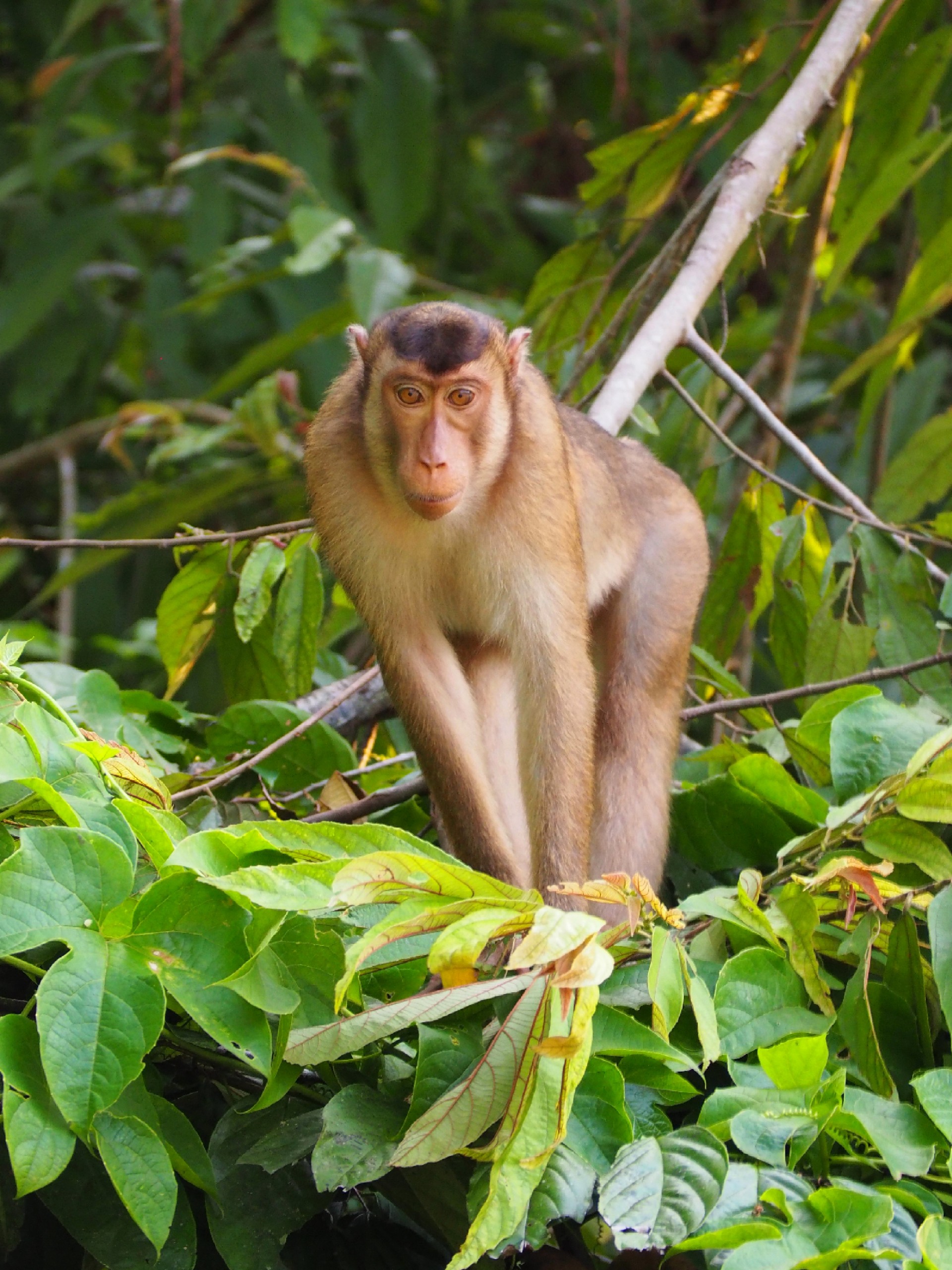 Unimpressed by our presence.

That was the first and last time we got close to seeing an orangutan in the wild. They’re pretty shy, too. We saw loads of other stuff to make up for it though. Bright orange proboscis monkeys with their slightly ridiculous looking droopy noses. Rhinoceros hornbills, which look like they’ve been torn straight from a documentary about dinosaurs. And then dozens and dozens, family upon family of both long tailed and short tailed macaques. Each one slightly more bold than the last, almost stepping onto the boat as I did my best not to take too many pictures. I failed.

After all that, we almost topped it off with seeing pygmy elephants after a tip off from one of Wafi’s friends. Alas, it was not meant to be – we sped crazily down the river but they were gone. We had to make do with boring jungle sunset instead… 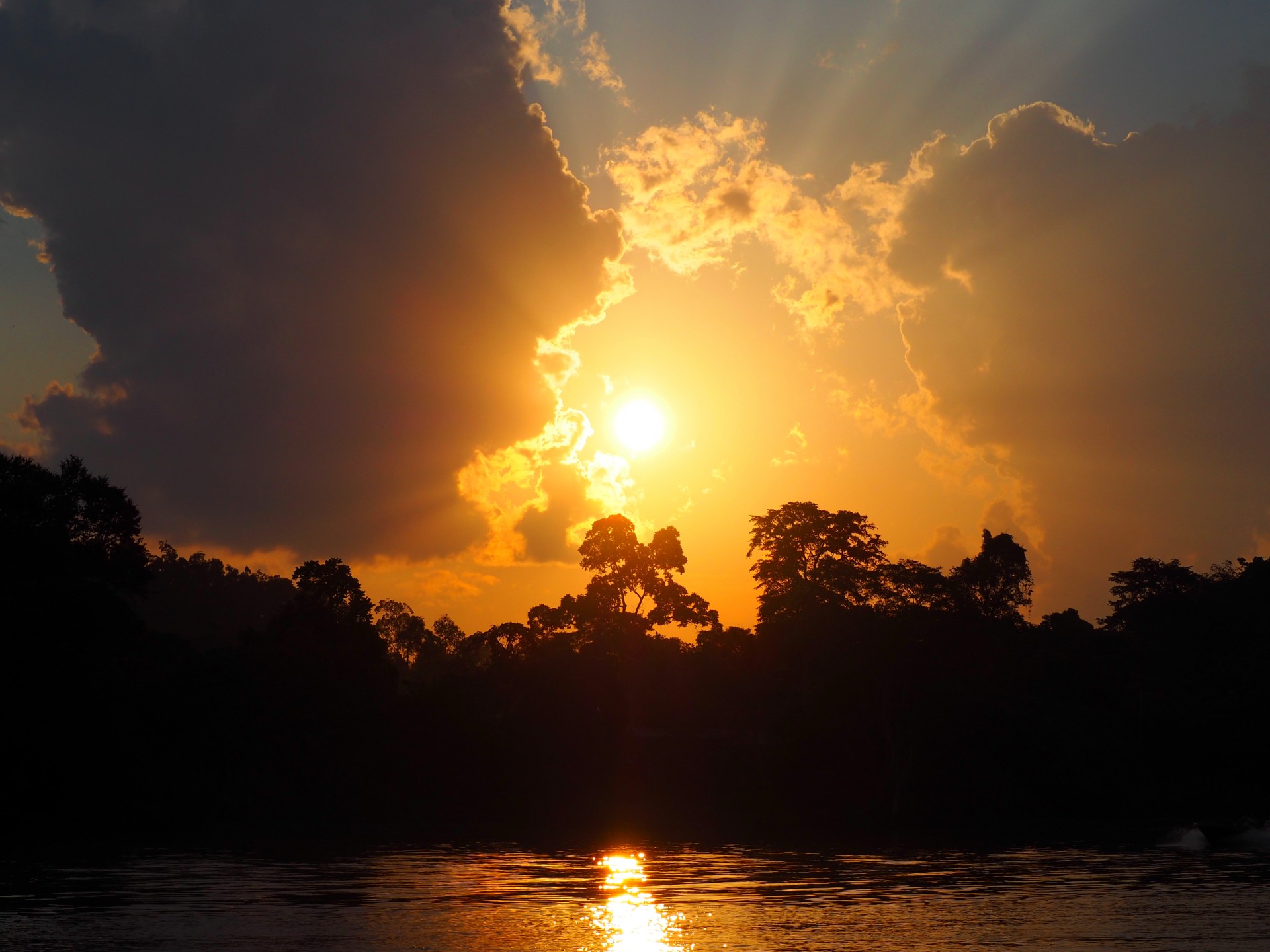 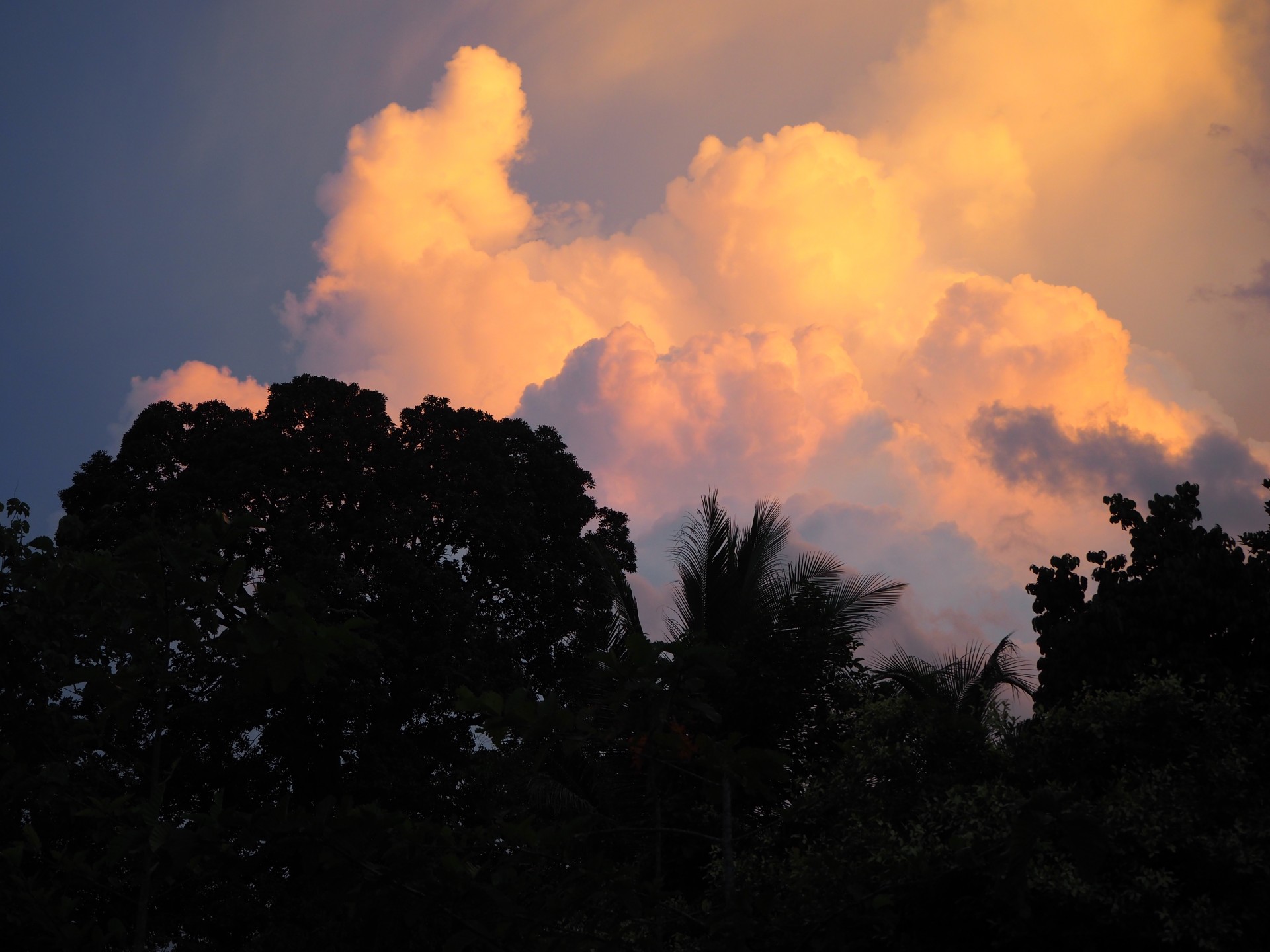 As if that wasn’t all enough excitement in the evening, we went out into the jungle to look for danger. No, literally, Mr Aji (we joined with the whole group this time) told us to make sure kept our torches on and not brush the plants, because some of the spiders can paralyse within 30 minutes. Cue a slightly awkward hour of jungle navigation as my torch spluttered, coughed and eventually died. All while I was at the back of the line…

Early the next morning we went for another jungle walk, this time with Wafi. In the daylight the rainforest depths seemed slightly less foreboding and menacing as we took more notice of the giant trees that had been standing for hundreds of years, orangutan nests and (occasionally) butterflies, too. In fact, in what was a pretty relaxing stroll, the most exciting moment was a fleeting glimpse of a giant monitor lizard darting into the trees. 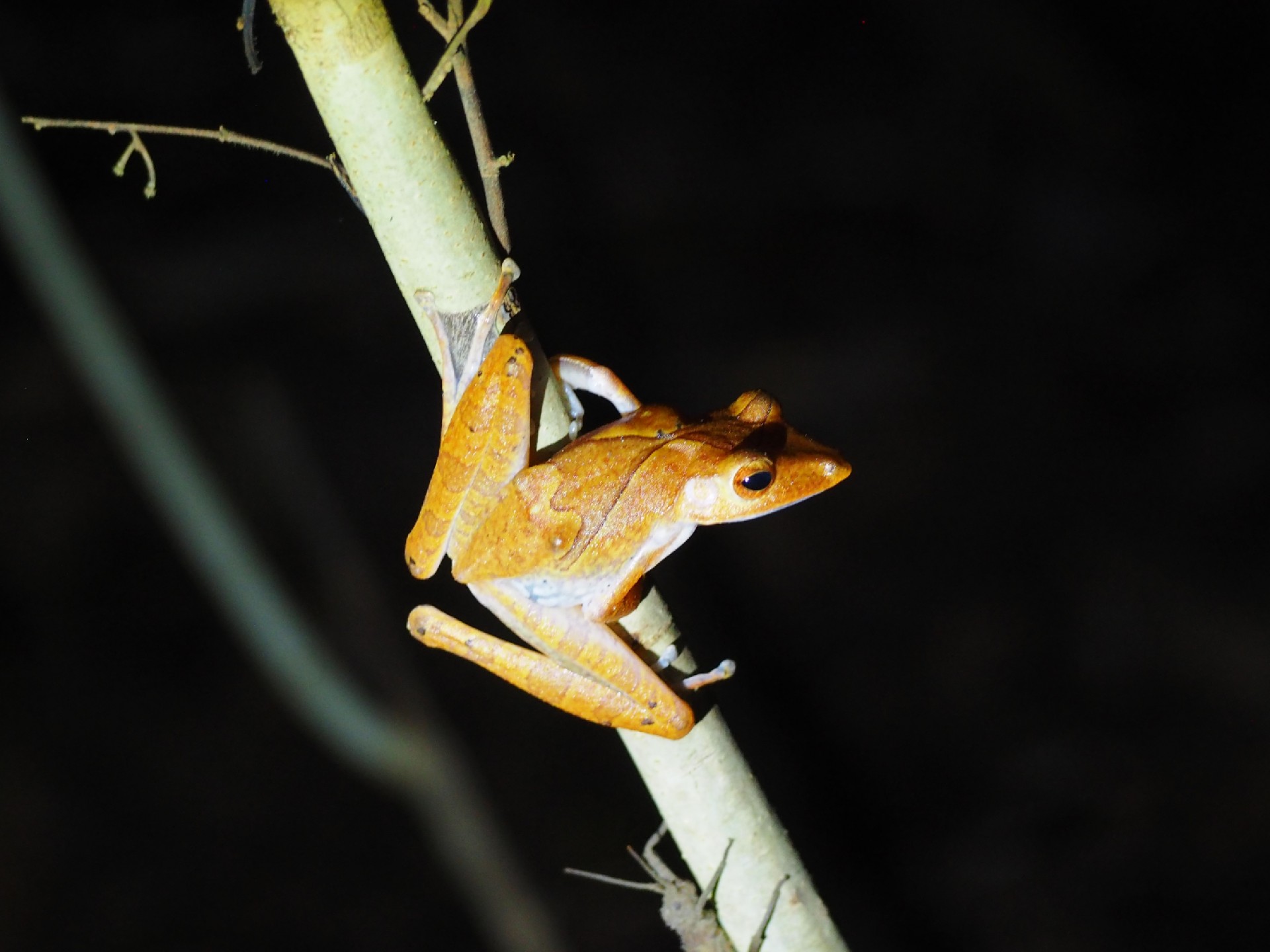 Frog in the night. 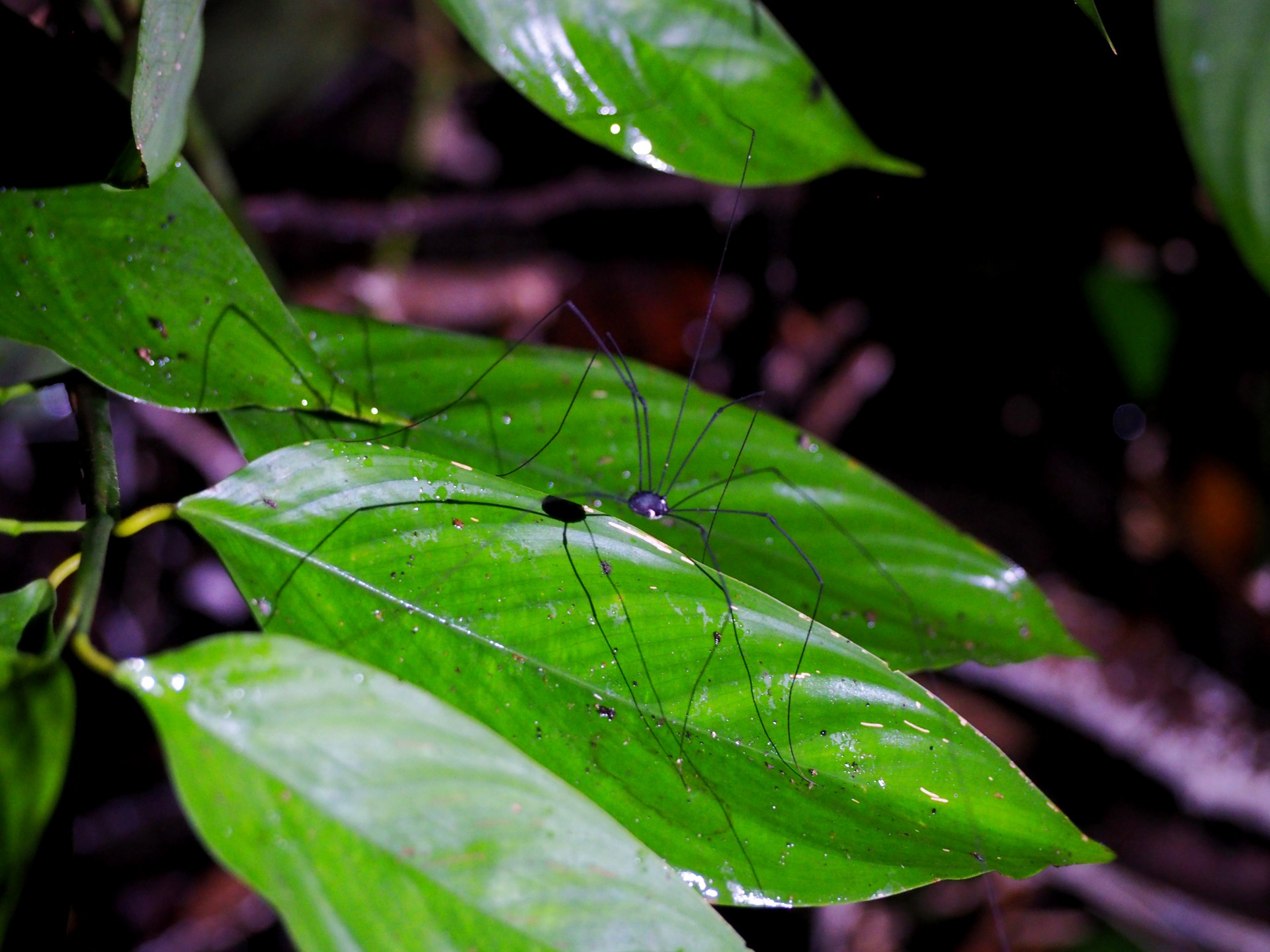 This one’s not going to kill me straight away.

Soon after, we had to leave. Our main objective for the rest of the day was to get back to Kota Kinabalu. Despite missing out a couple of days earlier we still harboured vague hopes of a visit to the sunbear sanctuary nearby, another animal at threat due to deforestation. Worries about getting the bus back put paid to that one, though.

It was probably a good thing too, if only because getting the bus back turned out to be a bit more of an adventure than planned. We’d gotten dropped off at a major junction in the road, where you could apparently flag down the plentiful buses quite easily. Only, it wasn’t that easy. It was baking hot, especially standing at the side of the road. Those buses coming from Sandakan also turned out to be pretty full, too. If we didn’t get one soon, we’d be in trouble because afternoon departures are few and far between. 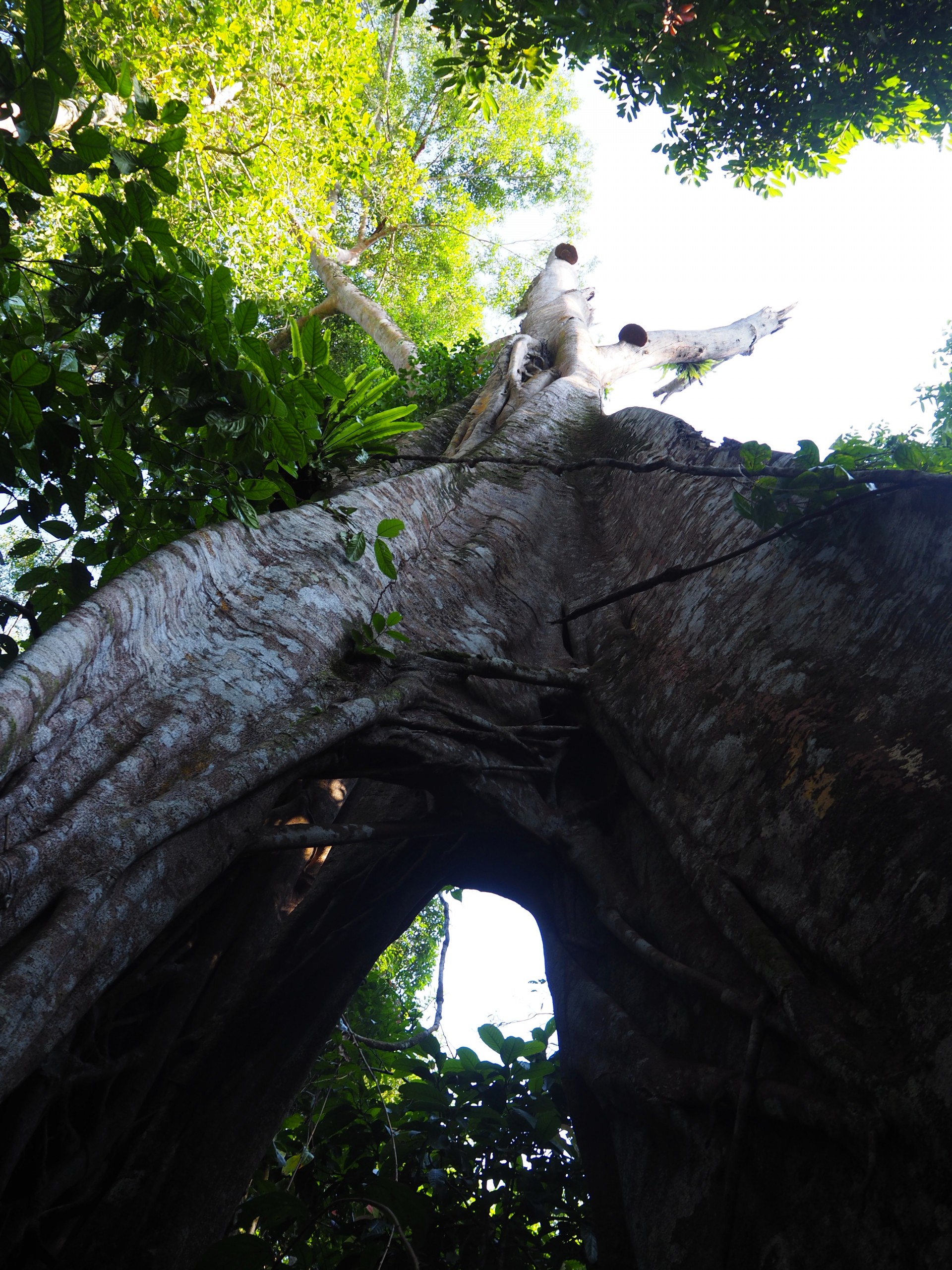 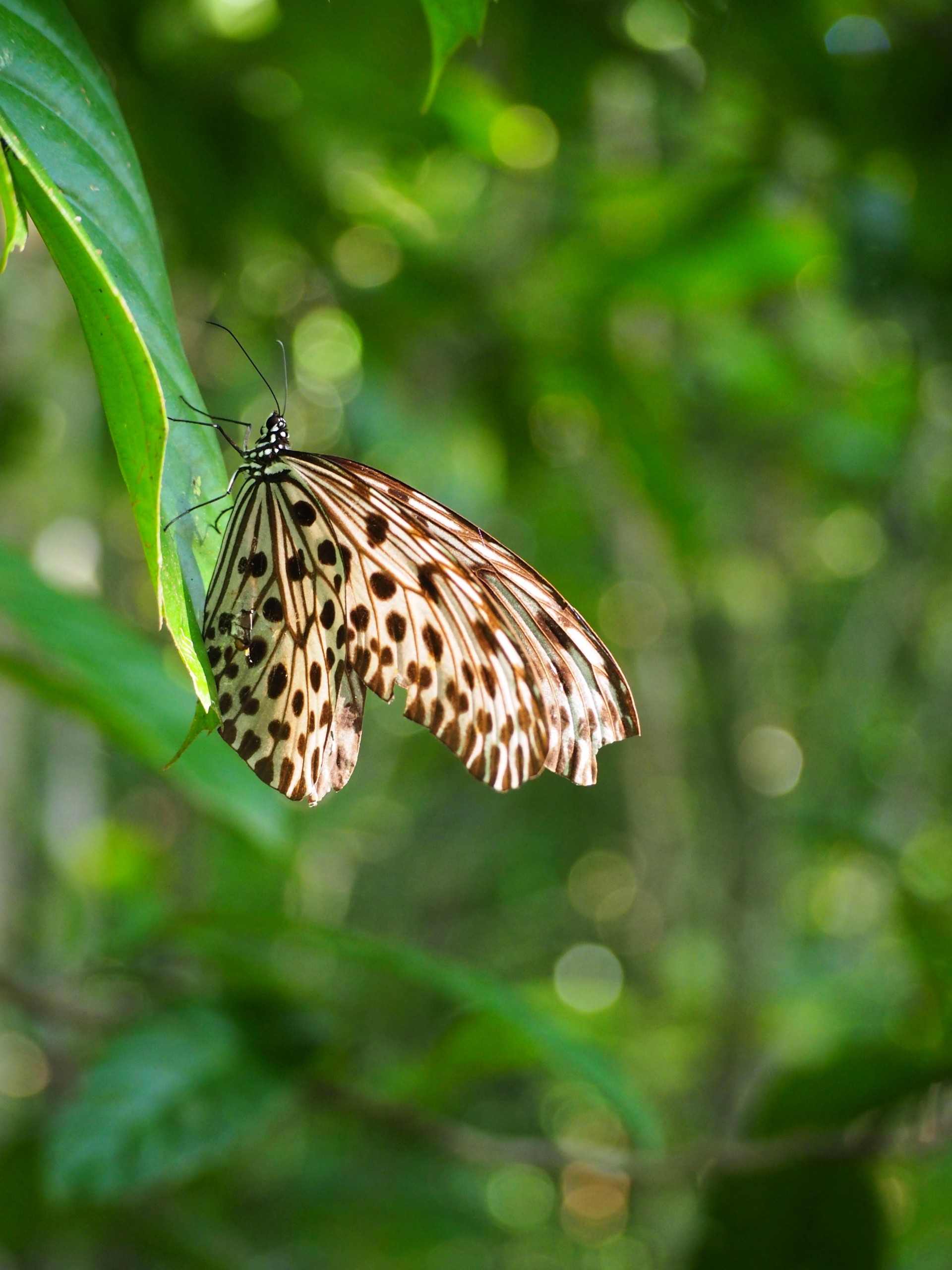 Amazingly it kept still enough for my photos!

Luckily, with the help of a random man in a red shirt, we negotiated our way onto a bus. Part of the way at least. Things went awry right at the start, when a few miles down the road it seemed for a few minutes like we were being thrown off in place of two women at a bus stop, only to be invited back on again.

Now the bus was packed tight, and since we weren’t allowed to stand up we were unsure what was going to happen. Fortunately, we gained a seat when the conductor gave us his seat. The other? Well, that was the step in front of the door, of course. Extra comfy. This was how we stayed for the rest of the journey. Casey-Lee on the front seat. Me perched on the floor. 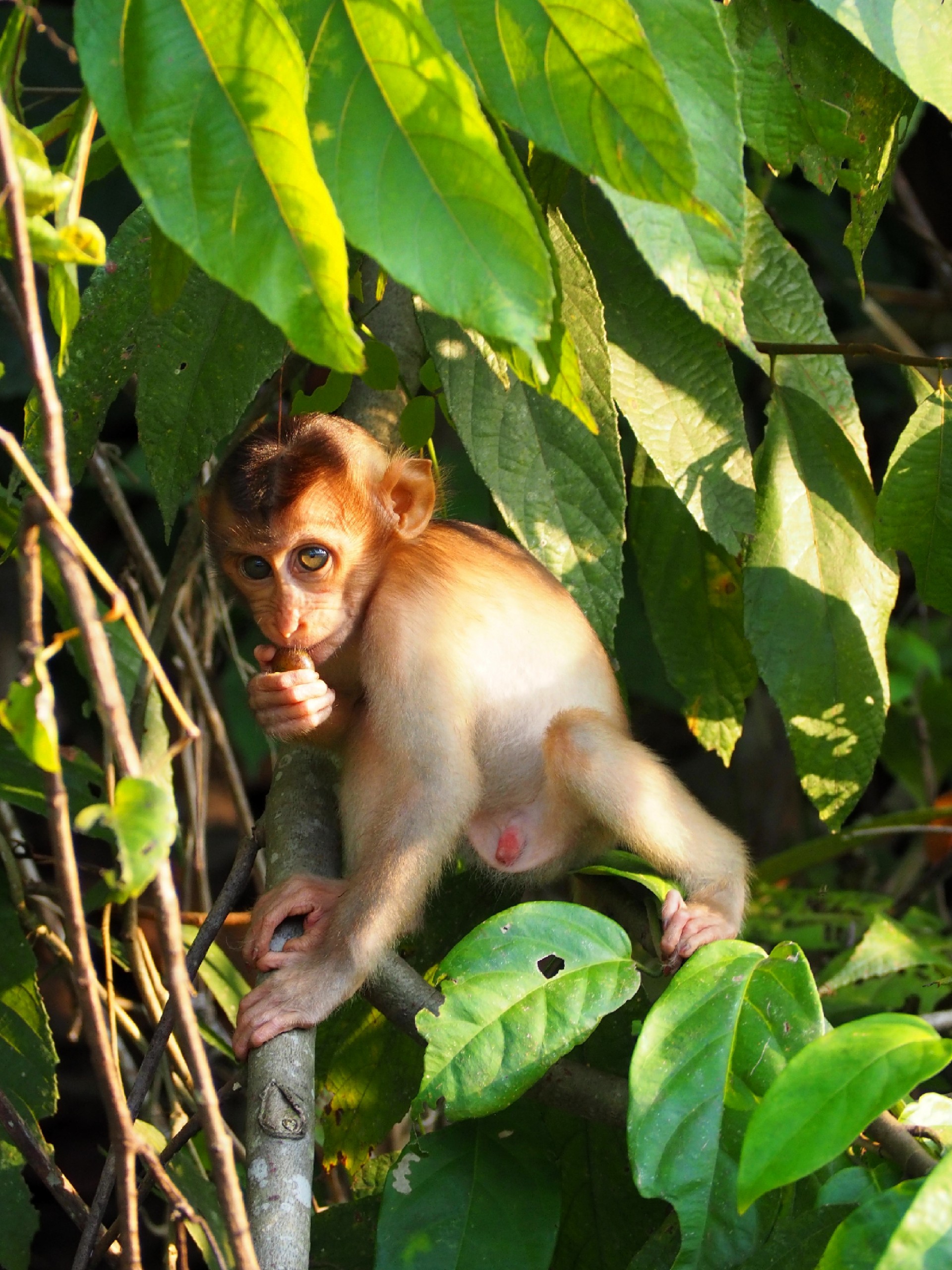 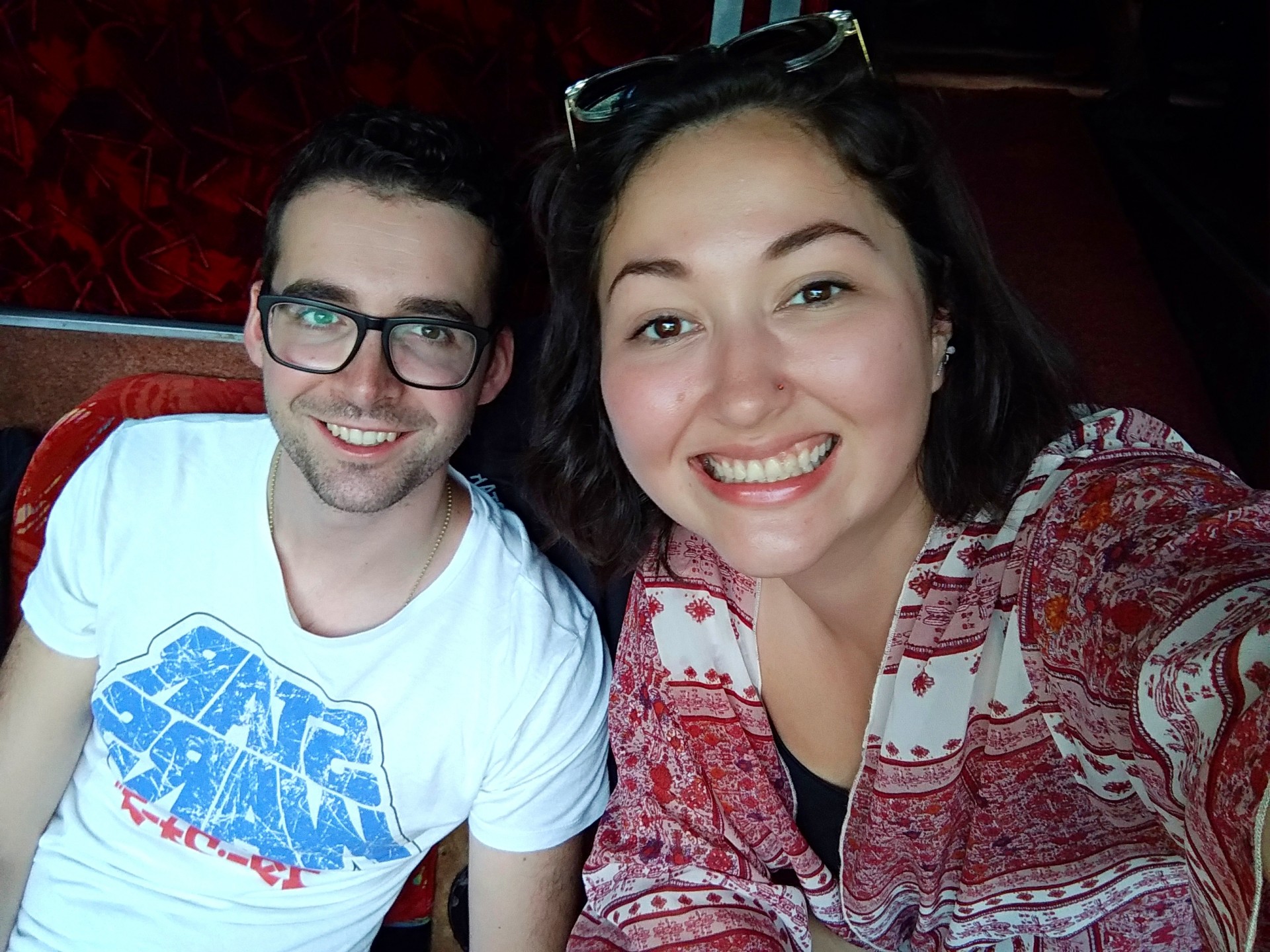 Taking a turn in the real seat.

After the rocky start though, we were able to form an unlikely friendship with our driver, Wan, and conductor, Eddie. They looked after us on the bus and made sure we were ok, chatting throughout the day. They also kept us hidden from view as we pulled up to the security manned rest stations, where those not in seats would have been thrown out. Wan and Eddie formed a pretty good team, and suggested to us that next time we returned we should employ them as guides. Eddie doing the talking, obviously.

Despite a stop to help another broken down bus driver, we made much better time this way around, and it didn’t feel nearly as long either. When, an hour and a half or so from the end, a seat opened up for me, I was pretty happy. Even if it was next to the toilet. 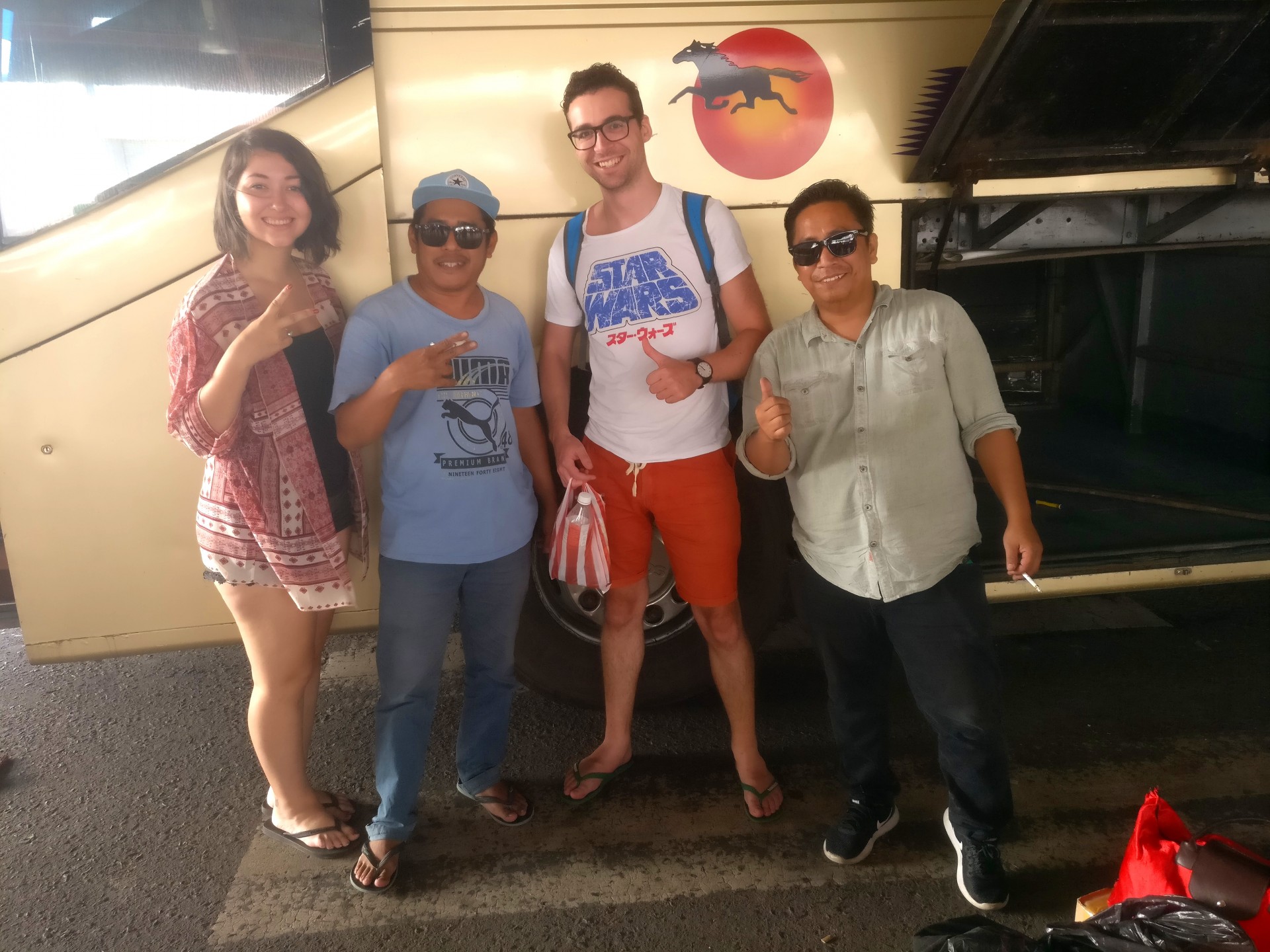 With Eddie and Wan, our sort of saviours. 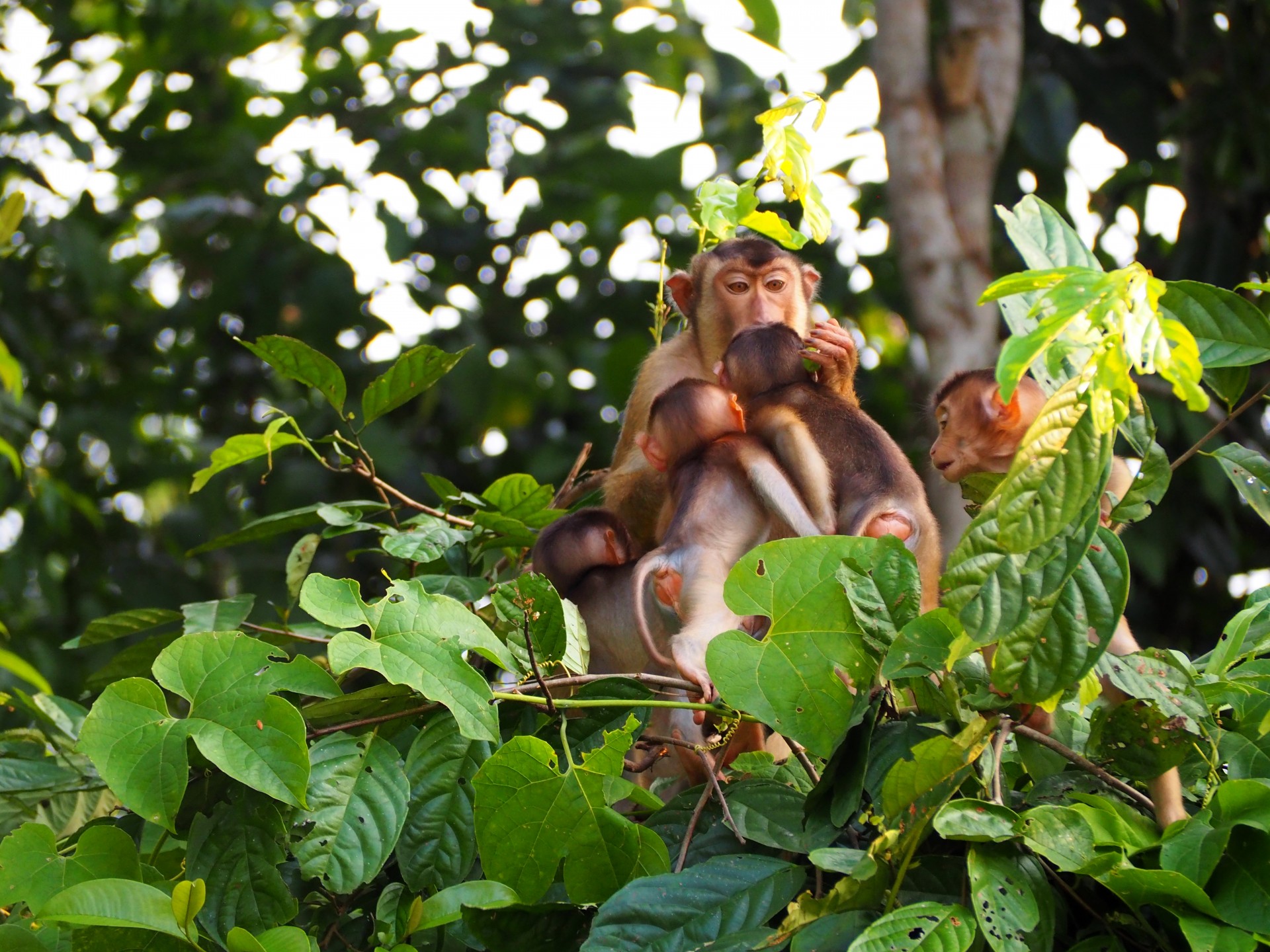