There wasn’t much left to do in the Galapagos after the dive. Actually, that’s very much a lie – it was more of a case of there wasn’t very much I could do. I had one more whole day left, and not wanting to leave the boat to San Cristobal till the morning of my flight, I had to use my whole day. No more island adventures. I spent my last evening on Santa Cruz trooping around town in an attempt to get contact details for my friend Audrey’s dive company. It was closed, predictably, but a bit of detective work solves many problems. I also got a homemade dinner from Alisa and Johanna, two German girls I had met on Isabela. Their Couchsurfing host had left them with a flat to themselves, and food was good. My stay on San Cristobal was hardly eventful. I was so tired by this point that I spent the day mooching around the touristy souvenir shops. That did result in one very, very important acquisition though. An ‘I love boobies’ t-shirt. Now there’s a joke that can never go wrong. Magikarp outside Guayaquil airport. Looks like the Pokemon craze has already started.

Soon I was on my flight back to the mainland. It was sad, but I’d had (obviously) an awesome time, so I wasn’t too upset. More at the forefront of my brain was that I had booked my return to Guayaquil, whereas most of the plane would be going on to Quito. Being that I was also actually going to Quito, that might have been a silly decision. I was in Guayaquil by 3PM, with only a short walk to the bus terminal, and had to wait till 11PM for the bus – any earlier would have seen me arrive in Quito at silly o’clock. To break up the time I ate some Ecuadorian fast food. I should have stuck with McDonalds. Quito arrived about nine hours later, and greeted me with one of the easiest openings to a city, ever. A tourist information point, which promptly informed me which trole (pronounced trolley) bus to take to the centre. Or rather, the Ecuadorian girl there said this. Things have never been so easy. It was exactly what I wanted – an easy place to spend a few days writing while the Galapagos was still fresh in my mind, applying for some volunteering opportunities, and catching up on some much needed sleep. That came with a downside though – a large amount of time spent not doing anything particularly exciting. Also, only one of my three tasks went successfully. In the central square.

That was the writing, though it certainly took longer than expected. I get distracted easily guys, you know that. Plenty of people to talk to, plenty of stories to swap, plenty of random Ecuadorian guys to get destroyed at chess by, etc. I’m an old hand now, one of the longer travelling people around, so naturally people look to me as a leader. Some might even say messiah. Yeah, I know, a little overboard – I think I need another month or two before I’m at Jesus level. Seriously though, it was great just slowing down and hanging around again – and you realise that’s happening when shopping for trekking pants that are safe from mosquitoes and Spanish versions of Harry Potter become adventures. So thank you Ross, Jude, Ben, Gemma, Harry and others. Applying for volunteering, however, did not go quite as planned. I’d originally planned to see if I could get a Workaway in Colombia (remember, I finally signed up back in Chile), but didn’t want any old Workaway. I wanted something that would be genuinely useful, and interesting for me, too. Since the subject had cropped up when I’d been in Peru, I felt if I could get something related to an NGO it might help me get a job in the future. That ruled out hostel work, but I was also unconvinced by the possibilities of English teaching. Is it just me that feels that I should be more qualified? Ross brought up the possibility of working with the Ecuadorian earthquake crisis. He’d heard, while in Montanita, that after the first two weeks of front page news, they were crying out for volunteers to help with construction, especially those so close by. A genuinely useful opportunity where I would be actually helpful? A quick Google search (obviously important disclaimer: other search engines are available) and application later, and I just had to wait. Unfortunately, five days later I got an email back – they could accept me, but not until August. As much as I did want to help, I would have to spend all my remaining money to stay until then, and more that I didn’t have to extend my insurance beyond its current end date, and had to turn them down. Hopefully I can go back to help when I’m a bit more organised. 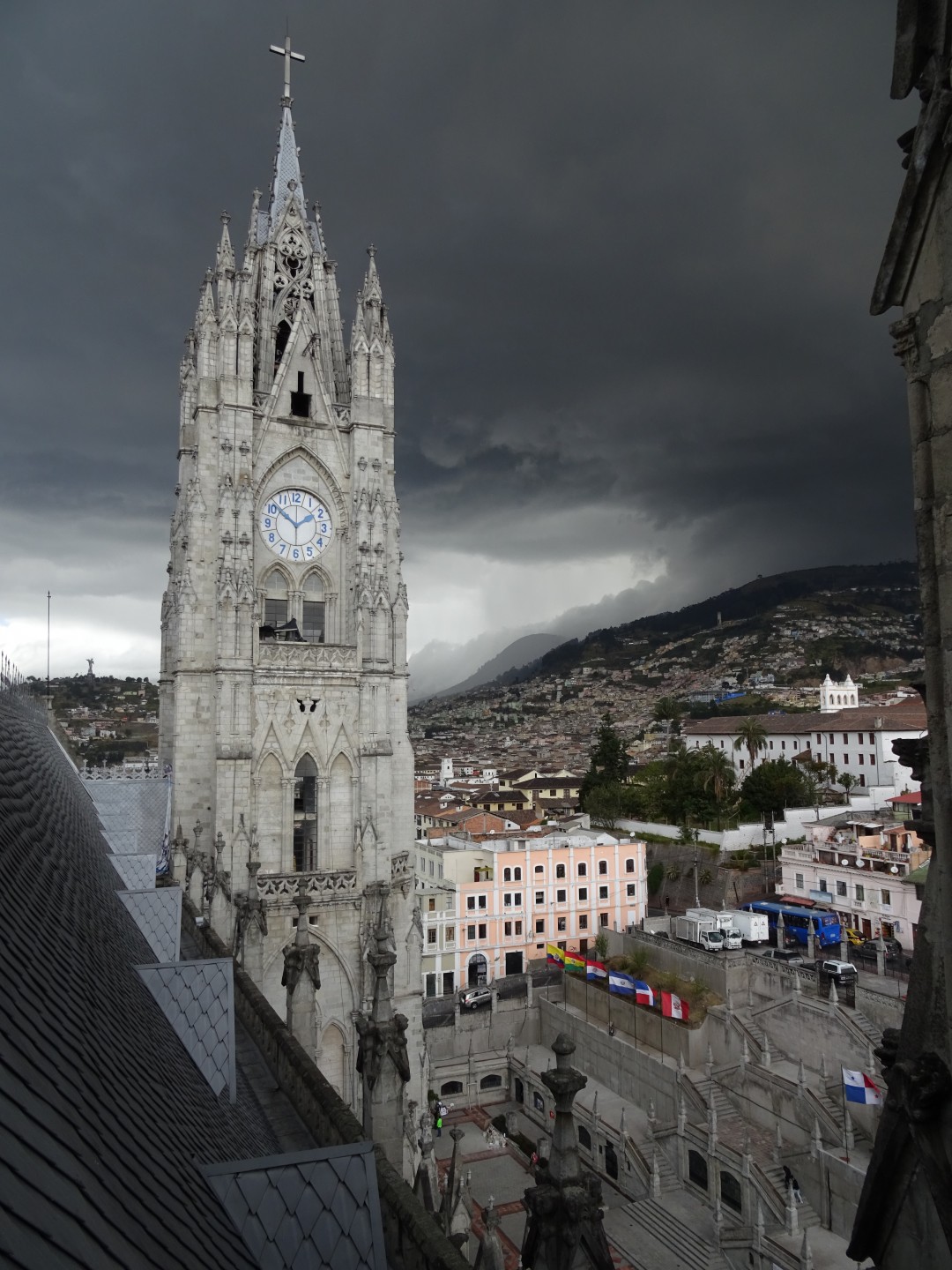 It brightened up later. Honest!

All this thinking prompted a wave of revelations, firing like pistons in my brain for the whole day. I didn’t really have much money left,. Applying for volunteering was eating up what little time I did have, and just stopping me doing interesting things. My insurance runs out on the 17th of August, and it’ll cost a disproportionately stupid amount to extend for a short amount of time. All my stuff is falling apart and will soon need replacing. If I leave before the 17th, I’ll only have three weeks in Colombia. That hit home – I’d wanted to spend an extended time there, and now I’d be facing, for me, a short visit. I decided, late that night, to leave for Colombia the next day. So that’s why I saw so little of mainland Ecuador. And that’s why I left Quito still very tired. As Meat Loaf didn’t say, one out of three ain’t bad, and I had at least one thing to cheer me up. A twenty seven hour journey, across seven different modes of transport, to my destination over the border. With so little time left to do justice to a country as raved about as Colombia, sacrifices would have to be made. Coffee wasn’t going to be one of them.